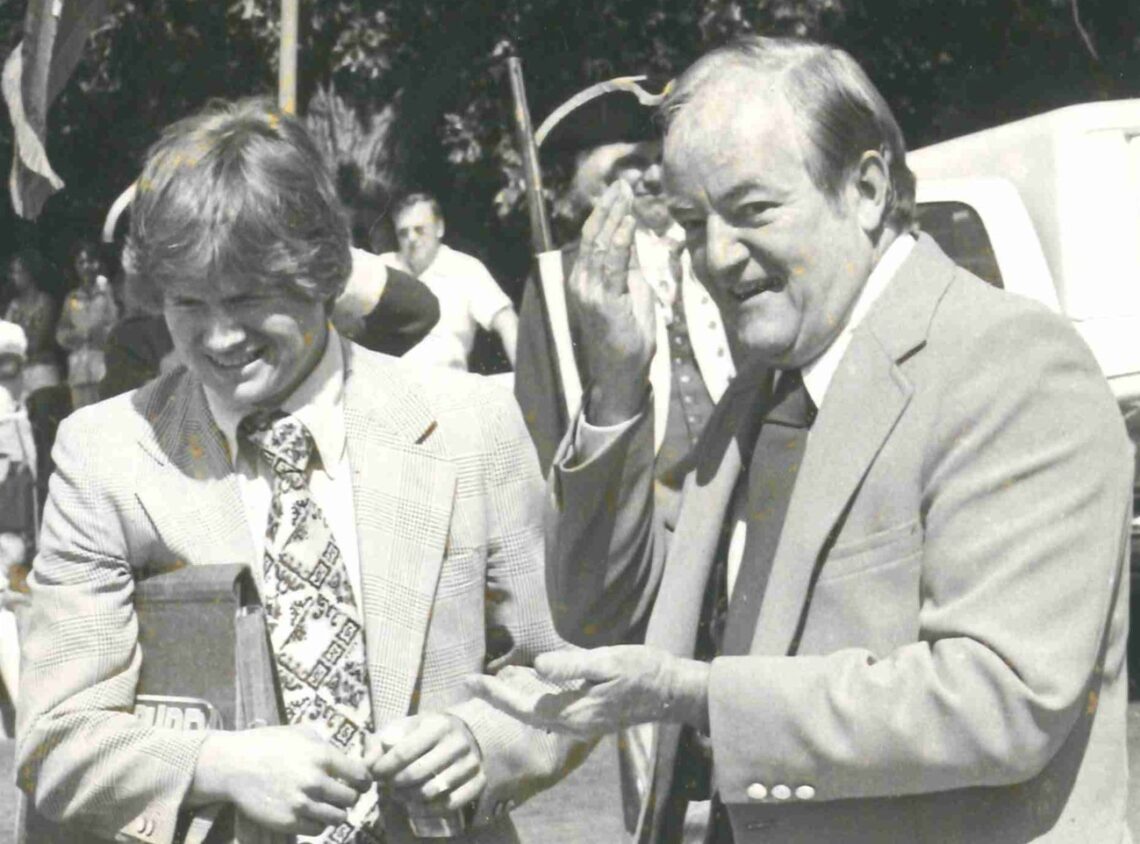 Chief Judge John R. Tunheim was nominated to the federal district court by President Clinton in 1995. He has served as chief judge of the United States District Court for the District of Minnesota since 2015, and his term as chief judge expires July 1, 2022. This is the first installment of a three-part series about Chief Judge Tunheim’s life and career. The first installment focuses on Chief Judge Tunheim’s early life through his time as a student at the University of Minnesota Law School.

In 1968, 15-year-old John Tunheim was a student in Phillip Dyrud’s ninth grade social studies class at Marshall County Central High School in Newfolden, Minnesota. The class was assigned the task of researching and presenting on a pressing public issue through a mock legal trial.

NASA’s first manned orbit of the moon was mere months away and three astronauts had recently lost their lives in a training exercise aboard the Apollo 1 – the topic of the mock trial was whether the United States’ space program should continue to use astronauts or shift to full automation.

Tunheim was assigned as the attorney arguing for automation. Though he did not personally agree with this position, he took to the role zealously. There were no lawyers in his small town to consult, so Tunheim researched the role by watching episodes of Perry Mason, collecting information on NASA’s safety record, and brainstorming ways to trap his classmate witnesses as they testified. Although he lost the case – no one wanted a space program without astronauts – Tunheim was so inspired by the assignment that when Mr. Dyrud later asked the students to write about three potential careers, Tunheim offered to write three times as much about being an attorney.

John Raymond Tunheim, named John after his maternal grandfather, was born in 1953, the eldest of Lucille and Raymond Tunheim’s three children. He was raised in Newfolden, a small farming community on the banks of the Middle River, just beyond Thief River Falls in northwestern Minnesota. Tunheim’s great-grandparents emigrated to Newfolden from Norway in the 1880s and homesteaded the land as farmers. He grew up in a home with strong connections to his family’s Norwegian heritage and his maternal grandmother and great-grandmother lived with the family throughout his childhood.

Tunheim’s mother, Lucille, taught many subjects at the local high school and instilled in her children a vigorous curiosity anchored by a passion for reading. Tunheim was a student in Lucille’s high school history class. Despite concerns from his fellow students about the travails of having one’s mother as a teacher, Tunheim loved Lucille’s classes and their shared affection for history was foundational to his education.

His father, Ray, ran the local cooperative grain elevator. Tunheim spent his summers working alongside his father and was struck by his father’s extraordinary work ethic. The elevator turned a profit every year of Ray’s tenure, including the year the elevator burned to the ground and had to be rebuilt.

Although Newfolden was a town of only a few hundred people, the community fostered Tunheim’s curiosity and love of exploration. Kids in town were encouraged to join every activity – Tunheim was a cast member in elementary school operettas and high school theatrical productions, played on the football, basketball, track, and baseball teams, and found lifelong mentors in his teachers.

The late 1960s was a tumultuous time in American politics and experiencing these events – assassinations, riots, the civil rights movement, and the Vietnam War – from the insulated comfort of his childhood home inspired in Tunheim a political awakening and a desire to make a meaningful impact on the world.

In 1971, Tunheim left Newfolden for Concordia College in Moorhead, Minnesota. He majored in political science and history and his trajectory was again shaped by his favorite teachers. Tunheim studied political science with Dr. Harding Coolidge Noblitt, from whom he learned more about the U.S. Constitution and American party politics than any person before or since.

Harding encouraged Tunheim to pursue a career in law, and a class assignment gave Tunheim his first opportunity to write a judicial opinion. In the opinion, Tunheim found the Easter Monday holiday to be unconstitutional; this first foray into judicial decision-making became a joke between professor and student when Tunheim was nominated to the bench decades later. Like many of Tunheim’s mentors, Harding became a faithful friend and confidant. When Tunheim delivered Harding’s eulogy in 2007, he recalled the formative impact of Harding’s “captivating fascination with the world and the great lessons of its history.”

Although Tunheim would not return to Newfolden to live, the town and his family’s heritage remained deeply important to him, both personally and intellectually. Concordia College history professor Dr. Hiram Drache encouraged Tunheim to explore this legacy and supervised his undergraduate thesis about Scandinavian immigration and homesteading in the area. Tunheim conducted interviews with community members, pored over county records, and mined family accounts and personal reminiscences.

To this day, he receives inquiries from people trying to trace their ancestors to that small farming community. When Tunheim self-published a book on the subject in 1984, Hiram wrote a forward praising the care and detail of the text, describing it as an important “piece of the puzzle” to understanding the formation of the United States.

During a semester work-study program in Washington, D.C., Tunheim was introduced to another life-changing mentor when he interned in the office of Senator Hubert H. Humphrey. Global food policy was an important topic for Humphrey, and Tunheim – who Humphrey referred to as Jack – prepared a large briefing book on U.S. agricultural statistics for Humphrey’s attendance at the World Food Conference in Rome.

Upon graduating from Concordia in 1975, Tunheim worked as a field representative in Humphrey’s Minneapolis office. Tunheim traversed the northern half of Minnesota, holding office hours and town forums for Humphrey’s constituents. Each trip included a stop at the local newspaper to discuss the local issues, and every person who attended the forum received a follow up letter from Humphrey’s office. Tunheim was deeply inspired by the Senator’s unwavering commitment to serving the public – Humphrey held a staunch belief that the government had a role in improving peoples’ lives and he loved forging personal connections with constituents. When Humphrey passed away in January 1978, Tunheim helped to organize his funeral.

Tunheim’s work with Humphrey also facilitated another fortuitous event in his life. In the summer of 1976, he met Kathy Hill, who worked part-time in Gov. Wendell R. Anderson’s office and volunteered for Humphrey’s campaign. The two married in the winter of 1977, just as Tunheim was beginning his legal career as a student at the University of Minnesota Law School.

Tunheim entered law school with a keen interest in both the technical procedures and substantive role of the legal system in American society. He loved the nuances of civil procedure and the great formative cases of Constitutional Law and he relished Professor Don Marshall’s mastery of the Socratic Method in his torts and evidence classes.

In his third year, Tunheim served as the president of the Minnesota Law Review. Bob Stein, then the new dean of the law school, charged Tunheim with the daunting task of catching up on back issues of the publication. At the end of the year, the Law Review staff celebrated with a cake in the shape of a tombstone inscribed: “The Tunheim Year: May It Rest In Peace.”

Throughout his legal education, Tunheim remained aware of the grounding connection of his home and history. When he was selected as a charter member of his high school’s “Wall of Honor” at the Newfolden All School reunion in 2017, he remarked that in some ways he never really left his hometown, he was still “the kid who couldn’t wait to start school and didn’t want it to end.” Tunheim graduated from the University of Minnesota Law School in 1980, entering the profession he had committed to in 1968, thanks to Mr. Dyrud’s social studies class.

This is the first of a three-part series of the life and career of Chief Judge John R. Tunheim. In the next installment, “His Early Legal Career,” we covered Tunheim’s years as deputy attorney general as well as his time serving as chairman of the U.S. Assassination Records Review Board.