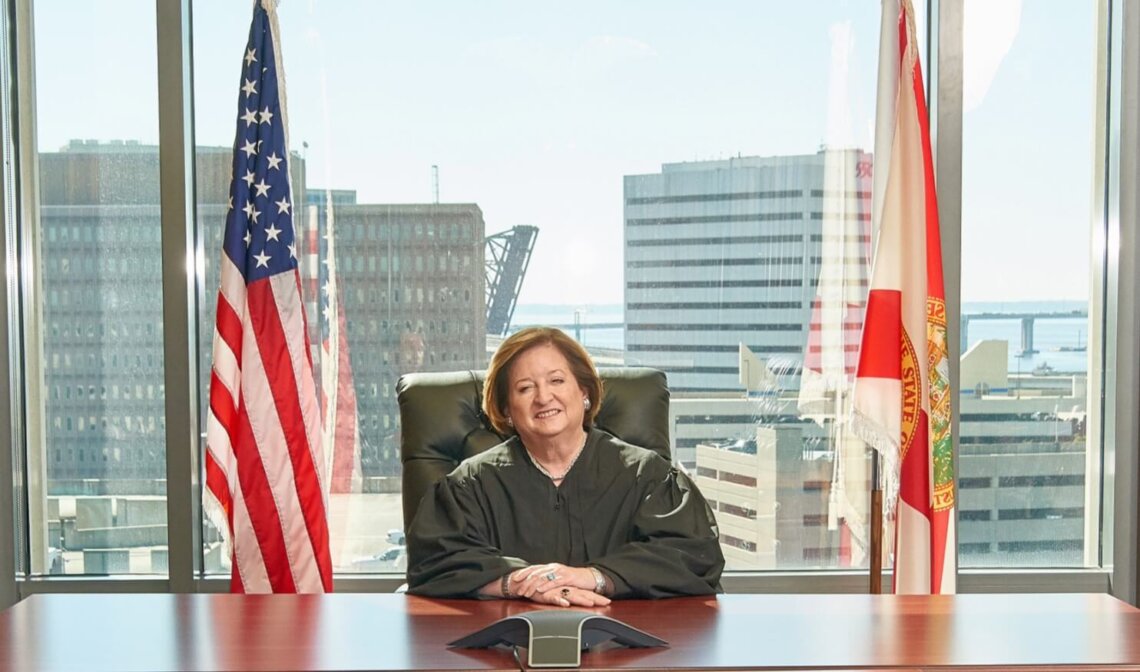 Even as a young lawyer, the Honorable Karen K. Cole of the Fourth Judicial Circuit was committed to community and professional service, the latter including a term as the president of the Jacksonville Bar Association. Now in her 25th year on the bench, Judge Cole’s active participation in civic and professional endeavors continues unabated.

What drew her from her successful private practice to the bench was the opportunity to apply legal and equitable concepts to the art of judicial decision-making.

“Where the law permits a judge a measure of discretion — and it doesn’t always — I wanted to exercise that discretion in a manner that I believed to be just and fair,” Cole said, adding that she is also committed to improving the legal system.

That includes taking the time to explain to jurors what to expect and what they can and cannot do and ensuring they complete their service “believing firmly in the worth of the jury system.”

And for that she also counts on the lawyers who come before her.

“Show jurors that you respect the process and their participation in it,” is her advice to attorneys. “Be prepared, including with case law on issues that you anticipate will arise.”

When it comes to preparation, state trial judges themselves have their work cut out for them. Like her colleagues, Cole has no assigned staff attorney, although for 20 years she’s had the same judicial assistant, Kristy Bend, whom she describes as “intelligent, sensible, and efficient.”

“It generally falls to the judge not merely to prepare for and preside over hearings and trials and to read memoranda of law prepared by attorneys, but also to independently research, draft , revise, and issue judgments and significant orders,” Cole said.

Added to that, judges have to be versatile, as they rotate division assignments among felony, civil, family, juvenile delinquency, juvenile dependency, and probate and guardianship.

Cole is currently assigned to a family law division.

“What I love about presiding over family law cases is that there is a myriad of resources available to families and that by judicious — no pun intended — use of those resources I have the opportunity to help a family leave court in a better place than it entered it,” Cole said. For that, it sometimes helps to have not only knowledge of the law but also insight into human nature.

“When I was in college, I took a standardized psychological test designed to compare the interests of the test-taker with the interests of persons in various occupations,” Cole said. “My interests, I learned, were most like the interests of psychologists and lawyers. To this day, I find that the two fields have much in common, and many of my friends are mental health professionals.”

Education is an area of focus for her, and her commitment extends well beyond the courtroom. She participates in school-focused initiatives such as Justice Teaching and often organizes free seminars on topics ranging from domestic violence to dyslexia.

One of her two sons is on the autism spectrum and the other has dyslexia and ADHD. Notwithstanding their challenges, both have excelled in college and beyond, the former earning a master’s degree and the latter a law degree.

“Fortunately, a cadre of dedicated experts saved my son from certain school failure,” she said of her son with dyslexia, who struggled mightily to learn how to read in grade school. “The scars from my son’s early academic failure did not fade quickly. They lingered until college. Ultimately, however, he earned high honors in college; interned for a Member of Parliament in London; graduated from a respected national law school; was recently sworn in as a member of a state Bar; and is currently pursuing a two-year master’s degree from a top 20 national university.”

As a result of her son’s experience with dyslexia, Cole became active with the nonprofit International Dyslexia Association.

“One in five of us is affected to some degree by dyslexia,” Cole said, adding that the scientific and medical research about effective reading instruction for those with dyslexia is excellent but still not widely available in the United States.