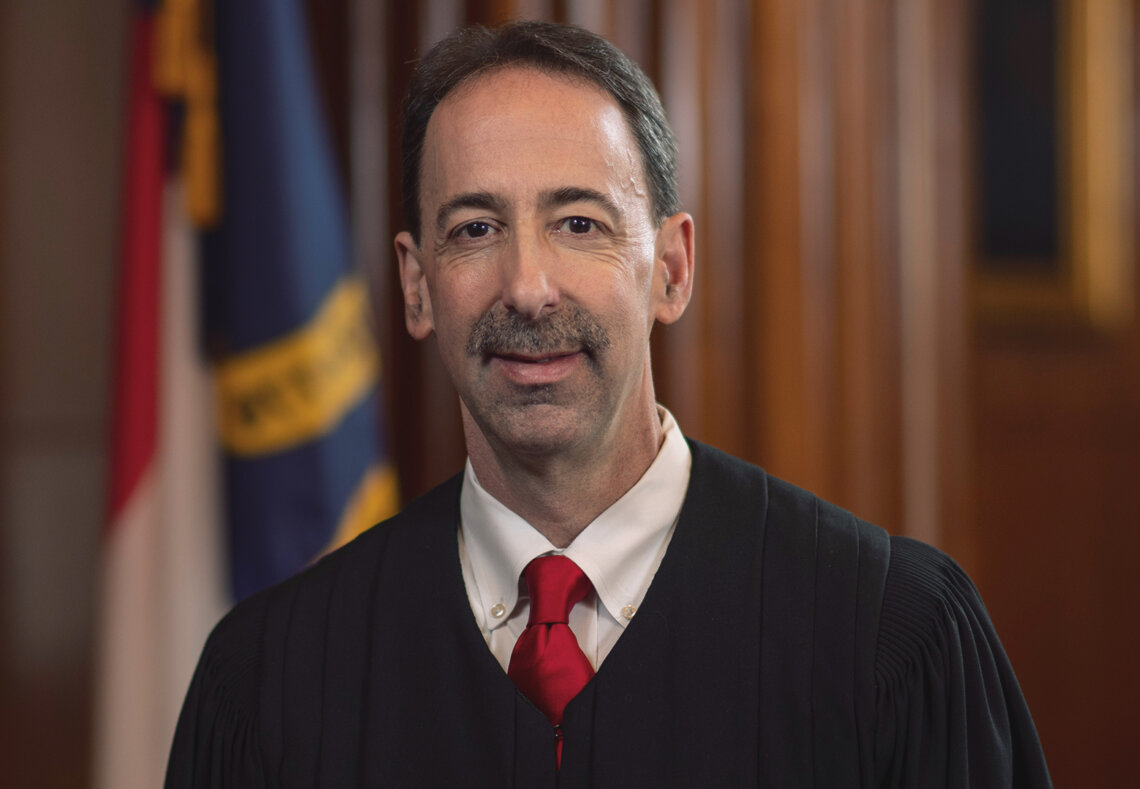 “As judges, we all take an oath to fairly and impartially apply the law, and that means everything to me,” said North Carolina Supreme Court Justice Mark Davis. “Any type of partisan bias or influence has to stop at the courthouse door.”

Davis is currently running in the November election to keep the seat to which he was appointed by Governor Roy Cooper in March 2019. With nearly eight years of judicial experience as an appellate judge, Davis has written over 500 opinions. “I consider myself the luckiest person on earth to be able to have my dream job. I work on weekends. I work at night. And I love every minute of it.”

PATH TO THE BENCH

A lifelong North Carolinian, Davis was born in Jacksonville and moved to Fayetteville as a young boy. After graduating from E.E. Smith High School, he received his undergraduate and law degrees from UNC. Following law school, he clerked for Judge Frank Dupree in the U.S. District Court for the Eastern District of North Carolina. “I came away from my clerkship with a great reverence for the judicial process and the way judges go about their work,” Davis recently recalled. “I knew I wanted to be a judge, but I also knew I first needed to obtain a wealth of practical experience as a lawyer.”

Davis worked as a litigation attorney at Womble Carlyle Sandridge & Rice for 13 years, ultimately becoming a member of the firm. During that time, he litigated over 200 cases and handled over 60 appeals in the state and federal appellate courts. Based on his longstanding interest in state government, he joined the NC Department of Justice in 2006 as a Special Deputy Attorney General.

“That section handles unique lawsuits, including the defense of constitutional challenges to statutes,” Davis said. “These are the types of cases you don’t get to litigate in private practice, and in hindsight working on those complex constitutional issues was great training for my work on the Supreme Court.”

After spending approximately two years as General Counsel in the Office of the Governor, Davis was appointed to the NC Court of Appeals, where he served for over six years.

“I consider myself so fortunate that every job I have had has prepared me in some way to serve on the Supreme Court,” Davis recently observed. “And there is no better way to prepare for this job than to have served on the Court of Appeals. Judging at any level is difficult and it is even harder on the Supreme Court. Given the importance and the complexity of the cases on our docket, prior experience as an appellate judge is simply invaluable.”

FAMILY, FAITH, BOOKS, AND THE GODFATHER

Being the first Jewish justice of the NC Supreme Court in its 200-year history is a source of pride for Davis. “Obviously, just because I belong to a particular religion doesn’t mean that I’m going to decide a case on anything other than the facts and the law, but I am very proud to be the first Jewish member of the Court,” he said. “My faith is very important to me, and it is a great honor to be the first one.”

Davis and his wife Marcia, a former classroom teacher, have been married for 28 years and have three children, ranging in ages from 13 to 22. “We enjoy spending time together. We are a family of readers. We also love sports, music, and movies.”

When pressed, Davis names “The Godfather” as his favorite movie. “It’s one of the most well-made and entertaining movies of the last 50 years,” said Davis. “The movie shows an entirely different system of ‘justice.’ It’s not something we’d ever want to emulate, but it makes for a great cinematic experience,” he laughed.

After receiving a Master of Laws degree from Duke Law School in 2018, Davis published a book on the NC Supreme Court titled A Warren Court of Our Own. “It was a labor of love for me to interview and write about so many legendary former members of our Court—including my greatest mentor, former Chief Justice Burley Mitchell,” Davis said.

As a lawyer, Davis did pro bono work for the Wake County Volunteer Lawyers Program and cites lack of access to justice as a major problem in our legal system. “That’s something I really worry about,” Davis said. “The law has become so specialized and complex that it’s virtually impossible for anyone to represent themselves and adequately protect their rights. At the same time, legal fees have increased substantially over the past 20 years. I am concerned about the ability of people with limited means to obtain competent legal representation.”

In talking about the judicial system, Davis often returns to the importance of nonpartisan and impartial courts. “When you walk into the courtroom, you should be confident that the judge is not going to rule against you because of what you look like, what your political beliefs are, or how much money you have,” said Davis. “You should know that you are going to be treated fairly and with respect and that the law is going to be applied evenhandedly in your case. That is how the judicial system should work and as long as I am fortunate enough to be in this position that is how I will approach my job.”