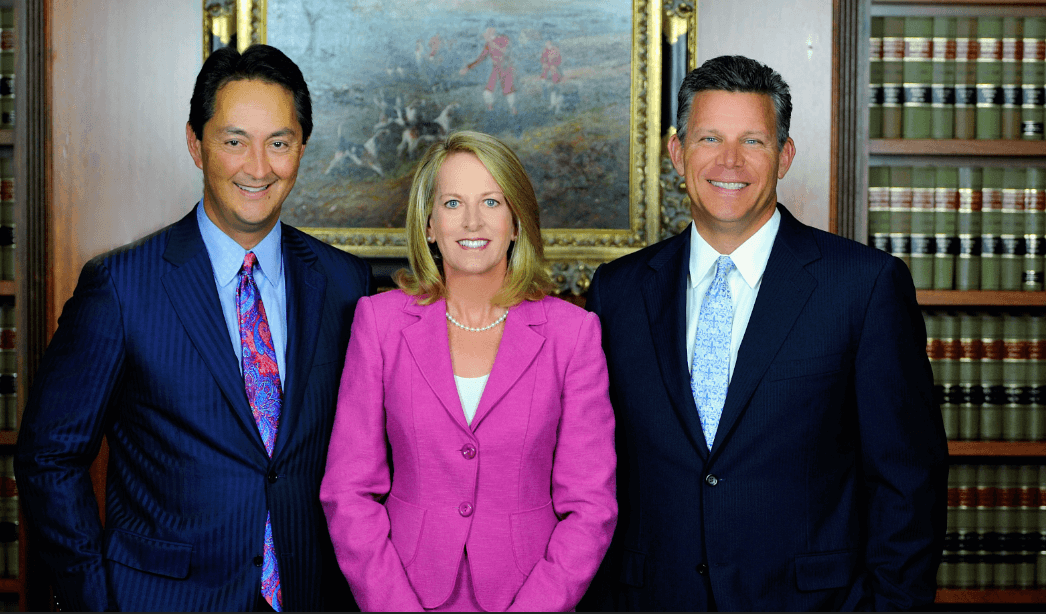 “We are a smaller firm that is successful because we are committed to treating people the right way, and the boutique nature of our firm allows us the flexibility and control to maintain that commitment,” says Fred Cunningham, managing shareholder of Cunningham, Whalen & Gaspari, P.L.L.C.

Jeanmarie Whalen agrees. “As a boutique firm with a highly selective case retention process, we are able to provide the highest level of legal representation to our clients. We are not afraid to undertake complex and novel legal issues. Additionally, as a result of our emphasis on case selection, we are able to provide one-on-one attorneyclient service. This all converts to the best possible results for our clients.”

David Gaspari says, “When it comes to hiring an attorney, you should want someone who returns phone calls, texts and emails – someone who keeps you informed. An attorney should speak the same language and take a personal interest in a client’s case. For instance, I ride motorcycles and understand motorcyclists. We strive to provide personal service.”

Cunningham, Whalen & Gaspari has six attorneys and six support staff to serve its clients throughout Florida in personal injury and insurance bad faith matters. The firm was formed in 1992 by Richard Slawson and Fred Cunningham. Jeanmarie Whalen joined in 1994 and David Gaspari joined in 2006. Richard Slawson retired at the end of 2014.

Cunningham says being a boutique is ideal for the firm and for its clients. “Sometimes you can grow your firm too big, bigger than your book of business needs. To justify a staff of attorneys, you begin taking on cases just to fill their time. We don’t have to worry about that. We can be selective about our cases, and we are.”

Fred Cunningham “I try to focus on why I am there. I remind myself that I’m working as hard as I do because I’m seeking justice for my clients,” Cunningham says.

Cunningham focuses his statewide practice on serious personal injury, insurance coverage, and insurance bad faith litigation. His efforts have earned more than $300 million in settlements and verdicts over the past 27 years. He is a past president of the Florida Justice Association. He has been board certified by the Florida Bar since 2000. He has been listed in every edition of Best Lawyers in America since 2001, including being voted Best Insurance Lawyer in Palm Beach County in 2015. He has been included in every edition of Super Lawyers since 2006, and has been honored by Super Lawyers as one of the Top 100 lawyers in Florida on three separate occasions.

He began his career in West Palm Beach practicing classic insurance defense, but after three years he decided to make the switch to representing injured parties in personal injury and insurance bad faith litigation.

“I didn’t have a lot of job satisfaction saving money for insurance companies. I knew those savings would never trickle down to the consumers. I identified more with the injured parties and felt like that was what I wanted to spend my life doing. I have no regrets,” he says.

Jeanmarie Whalen Jeanmarie Whalen devotes her practice to representing the victims of catastrophic personal injury and wrongful death. She represents plaintiffs in various types of complex litigation, maintaining a particular focus within the areas of aviation, trucking, recreational boating, serious auto, motorcycle and insurance bad faith litigation. She is admitted to The Florida Bar, the New York Bar and the Connecticut Bar.

Whalen frequently lectures throughout the country to trial lawyers and bar associations in the areas of her practice. She is a member of the Multi-Million Dollar Advocates Forum and a multiyear recipient of Top Lawyers in South Florida. She has also authored several nationally and internationally published articles in the area of civil trial practice. During her tenure with the firm, Whalen has obtained over 30 recoveries in excess of $1 million for her clients.

“Many of my cases throughout the years have involved complex issues of law and often, extremely challenging fact patterns. These cases are always heavily litigated and sometimes involve seemingly insurmountable issues. At the end of the day, prevailing for my clients and providing for their futures is a source of great personal satisfaction,” she says.

David Gaspari David Gaspari focuses on personal injury and wrongful death, and is Florida Bar board certified civil trial lawyer. He has earned an AV rating from Martindale- Hubbell, has been named one of Florida’s Super Lawyers, and is also a member of the Million Dollar Advocates Forum.

He began his career doing insurance and medical malpractice defense. He likes preparing every case as though it is going to trial.

“My philosophy is I try to do everything myself. For example, when I have an automobile case, I personally go to the scene of the accident. I take my own pictures. I talk to the witnesses. I talk to the doctors. I really don’t like to rely on other people to do that footwork. I enjoy doing it myself and I feel as though I have a much better understanding of the cases,” he says.

Associate Attorneys Greg Yaffa is a very accomplished lawyer in his own right. Yaffa is AV rated by Martindale- Hubbell and has been included in Best Lawyers in America since 2013. He has also been included in Super Lawyers since 2011. He is a member of the board of directors of the Florida Justice Association, and is a past chair of the young lawyers’ section of FJA. He is currently president-elect of the Palm Beach County Justice Association, and is immediate past president of the North County section of the Palm Beach County Bar.

“Greg is known throughout Florida as a top-notch trial lawyer. I trust him with every aspect of every case I am handling. Clients love him, and opposing counsel respect him. I cannot say enough good things about him,” Cunningham says.

Sam Cohen joined the firm late last year. The son of a prominent local orthopedic surgeon and a lifelong resident of North Palm Beach, he started his career defending doctors in medical malpractice cases. He has become very active in local bar organizations. “Sam is a great guy, and is going to be a great lawyer,” says Cunningham.

Clinton Lewis joined the firm in September. The double Gator joined the firm after an internship with Judge Alan Forst on the Fourth District Court of Appeal. “We are very excited to welcome Clinton to the firm. He is going to be a wonderful addition to the firm,” says Whalen.

Big Victories for a Small Firm The partners cite three cases that represent the firm’s commitment and abilities.

In 2001, Cunningham tried and won Snowden v. Lumbermens Mutual Insurance Company in federal court in Gainesville. Snowden was the first bad faith case tried in Florida in which the plaintiff had not sent a settlement demand letter to the insurance company before filing suit. Ten years previously, in Powell v. Prudential Insurance Co., 584 So.2d 12 (Fla. 3rd DCA 1991), the court had ruled that the plaintiff did not have to do a settlement demand letter for the insurance company to be found in bad faith. No one had tried a similar case until Snowden. Since the victory, the case has been cited many times, and has caused a change in the way that insurance companies handle claims.

Whalen represented a family traveling in a minivan that rear-ended a tractor trailer. Several family members were injured, including a 9-year-old who suffered serious neurological injuries. Multiple Florida law firms turned down the case believing that the client, who was cited for the rear-end crash, caused the incident. Whalen took on the case and was able to prove that the police report was inaccurate and in fact, the failures of the trucking company to comply with regulatory safety standards, failures to implement safe driving protocols, along with the driver’s violations of hours of service regulations and independent negligent driving actions caused the crash. As a result, just prior to trial, the case resolved by way of a confidential multimillion-dollar settlement providing for the long-term care needs of the family.

Gaspari represented a 12-year-old named Elizabeth Echevarria who was crossing Forest Hill Boulevard through traffic when a gentleman trying to make a left hand turn and beat the turn arrow hit her. She sustained significant personal injuries. After a five day jury trial the young woman received a verdict of $19.1 million.

The driver was found 80 percent at fault and the young girl was found 20 percent at fault because she crossed outside the crosswalk through traffic in the dark. Gaspari’s intention was to prove that the driver should have seen her, but instead he failed to stop and continued to accelerate. The young woman stepped out from behind a car.

“It was very satisfying to earn a verdict of that size for the client, where the insurance company had offered zero money and had said that the accident was 100 percent the fault of my client,” Gaspari says.

Gearing Up for Radical Changes Cunningham predicts radical changes in his firm’s practice areas during the next decade. “I think it’s happening already with the pervasiveness of attorney advertising, none of which we do. The challenge is always to figure out another way to bring in business. I think in the personal injury field there are a lot of forces at play that could radically change the practice. One would be driverless cars.”

Another such change is the ever-improving medical care seriously injured clients get. “I want to emphasize that it’s terrific that cars are being made better and medical care is improving, but clients will always face challenges – new challenges come with new technologies and treatments. Our firm will take those changes in stride and continue to serve our clients regardless of the challenges they face. We feel like we’re doing something good for society,” Cunningham says.

“I remind myself that I’m working as hard as I do because I’m seeking justice for my clients.”