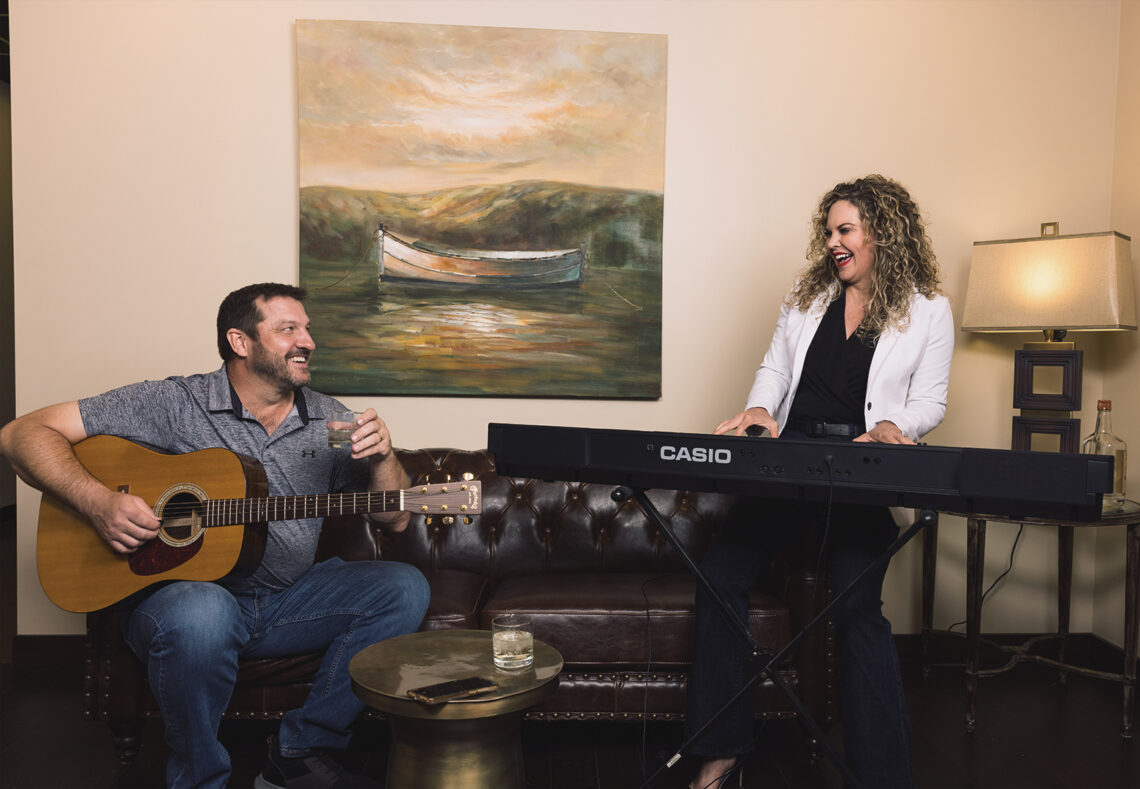 Some might not think of varying musical backgrounds as a solid base for a legal practice, but the founding partners of Deans Stepp Law, prove otherwise. “We complement each other like two musicians with completely different styles,” says Gregory L. Deans, co-founder of Deans Stepp Law.

Co-Founder Katherine H. “Katie” Stepp heartily agrees. “We approach the practice of law from entirely different perspectives. It’s like a concert pianist playing with a guitar player who is improvising on the same stage at the same time and, yet creating incredible music,” she says.

“Katie is unshakeable, determined and smart,” Deans says. “She is relentless in preparing for a case. I am a little more flexible in my preparation. I don’t like having a lot of notes or following a script but realize there are appropriate times for that. Those traits together prepare us for anything. Nothing surprises us.”

While Deans and Stepp have worked together since 2004 at other firms and have tried cases together since 2006, they formed Deans Stepp Law LLP in January 2020. The firm serves local, regional and national clients in litigating complex business and tort cases. Practice areas include wrongful death, trucking liability, negligence, product liability, commercial and banking litigation.

Deans was the youngest of three and, in his words, an onery kid who never studied music or took piano lessons. His parents didn’t think he had the patience and discipline for lessons.

“When I was in junior high a friend started playing guitar, showed me some chords and I started paying attention to local bands,” he says. “I decided that I was going to play the guitar and I took to that quickly. Within a year I was in a band playing almost anything on the radio. We played complicated music in the vein of the Canadian band Rush. The band was called Airwave most of the time but may have gone by Paragon and The Press.”

Deans was raised in and attends the Church of Christ, which traditionally has not used musical instruments. His early musical experiences were in acapella music. “All that harmony apparently soaked right into me when I heard all those voices together,” he says.

He was in a band in law school, a group that played primarily improvisational original music rather than cover popular tunes. “I continue that tradition in my legal practice,” he says. “I find my own way instead of automatically following a set formula or structure. It’s not uncommon for an attorney to be blindsided or thrown a legal ‘curve’ in court or in a negotiation. The ability to improvise an effective response seamlessly on the spot is a great asset not only for the attorney, but for the clients he or she represents.”

When he moved to Dallas, he joined a southern, classic-rock band playing bass and guitar and applying a newly discovered talent for singing and arranging harmonies. “I’d been picking out the instrumental parts of songs for years when I discovered I could break down and identify vocal harmonies as well. I ended up singing on the praise team at my church in Richardson where I grew up. I still play in a band that plays hard country, a little Waylon and Willie, and Texas country and I write some of my own stuff. My role in arranging harmonies is appreciated by the other guys, although they affectionately call the process ‘Harmony Hell.’”

The name of the band is Hard Country. He is the lead guitar player, sings backing vocals and plays a little piano.

Stepp’s experience is entirely different. The oldest of a six-sibling blended family, she is a classically trained pianist who started playing at the age of 4. Her parents had a “clunker” piano at their house in College Station and she “banged around” on it for a long time and then discovered that she could bang out real tunes. Her parents decided she should take lessons and by the age of 6 she could read music.

“That changed my view of music because reading the notes was like reading the words of a book,” she says. “I got to the point where I could sight-read almost anything. It was a great lesson in learning the value of practicing and following a well-crafted plan. That lesson has stayed with me throughout my career.”

When she was a kid, Stepp dreamed of attending The Juilliard School and becoming a concert pianist. She competed and did well in state piano competitions at SMU, TCU and throughout the state, but she never pursued a musical career. While attending college in Hawaii she did open her own studio where she taught piano helping to pay her way through her undergrad years, which made law school an option financially.

“Music has served me well all my life,” she says. “As a student and piano teacher, I performed on weekends. I performed at the governor’s mansion in Hawaii. I love it! I have a piano at home and an 88 weighted keyboard in my office as a stress reliever. I also enjoy the company and camaraderie when people come in, sit down and play for me.”

Today the varying styles work well for the firm and the firm’s clients.

“Thinking about Katie’s involvement in music makes me realize one of the reasons we’re law partners is because I never had the ability to read music,” Deans says. “I never studied like she did. She can apply herself, learn someone or something just by reading it, and then execute immediately with few errors. And, if we need to improvise, as is often the case in law, I have the experience, the ability and the drive. And, of course, we are both teachers and entertainers, which comes in handy in the courtroom. It makes for a really good blend.”

Deans says that two of the reasons the firm performs so well are flexibility and innovation. Each of the founding partners has experience working for very large firms. “The way larger firms operate often doesn’t make sense. They are brilliant and talented lawyers, but there are systemic challenges. Rather than client-centered, they can be centered on firm survival. There can be a lot of waste, inefficiency and unnecessary doubling up. We’ve taken the opposite approach,” Deans says.

As an example of how the Deans Stepp Law management philosophy works, Deans cites a case involving defending a client on a promissory note. The case became complex because it involved a commercial dispute, an employment lawsuit, an administrative action from the state dealing with radioactive material, and tax lawsuits from the county. He says the firm could have staffed up and hired 10 more lawyers and dragged out the case for a long and more profitable time. “Instead, we reached out to the opposing counsel, figured out a creative solution where everybody won, while zealously representing our client. We look at all the pieces of the puzzle to make sure everything fits so our clients can avoid a nasty and expensive situation. This has nothing to do with the court. It has to do with investment and relationships with people who want to not only invest in the process but resolve the issues.”

That investment in relationships has turned Deans Stepp Law into a national counsel for one of their clients, where, as a team, they took a docket of cases from thousands down to less than 50 by successfully defending the client in trial and in many cases extracting the client from the case early on by advocating personal jurisdiction in several states.

“We not only know our way around a courtroom but also know how to manage other attorneys to streamline the process for clients who have multiple lawsuits in multiple states,” Deans says.

In fact, the duo has only lost one jury trial in their role as national counsel and that case is still on appeal in the Oklahoma Supreme Court.

“Many litigation firms focus solely on how tough they are,” she adds. “We’re tough too, that’s the nature of trial attorneys. But our approach is more nuanced. While we’re always the strongest advocate for our clients, fighting for the sake of fighting isn’t in anyone’s best interest. Usually, the best possible result is obtained less expensively and more quickly when cooler heads prevail. Rambo is great, but we also channel Mozart. We strive to be innovative and provide services, counseling and options that many of our clients never even knew were available.”