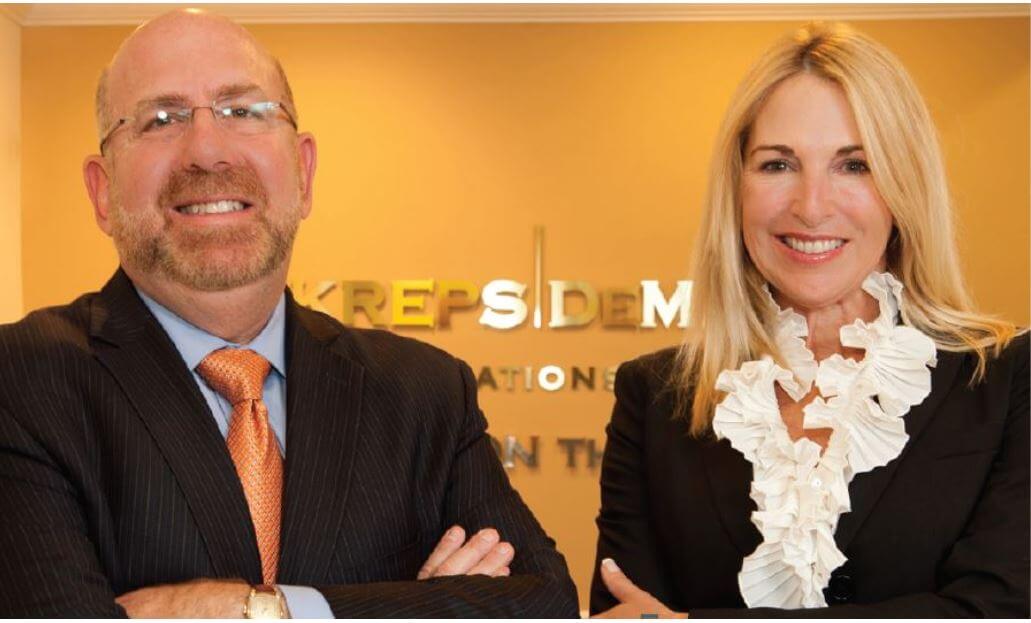 Kreps DeMaria Public Relations and Marketing is celebrating a quarter century of helping clients shine in the media’s spotlight, even when the glare is harsh. One of the largest and most established PR agencies in South Florida, Kreps DeMaria has attracted news coverage to subjects as magnificent as the world’s most exclusive private-island resort and as routine as a construction crew pouring concrete.

Over its 25-year history, the Coral Gables-based agency also has guided client companies through tough news coverage of such crises as bankruptcy, litigation and workplace injury. “We’ve handled every kind of crisis imaginable, from a child being run over by a bulldozer on a job site to a kidnapping at a luxury condominium,” says name partner Sissy DeMaria.

Less dramatic crisis-management moments sometimes have a comic twist. Kreps DeMaria once helped the InterContinental Miami hotel put a humorous touch on media coverage of an apparent criminal disposal of cash on its premises. “Fearing they would be arrested or face a scene straight out of Scarface, a hotel guest disposed of a large sum of money down the laundry chute,” DeMaria says. “The situation became a national headline-making case of ‘laundered’ money.”

Sometimes no publicity is the best publicity. Consider how Kreps DeMaria handled a reporter’s request for the CBS television network’s investigative journalism show “60 Minutes.” The reporter requested an interview to discuss litigious conflict on exclusive Fisher Island, located off the southern tip of Miami Beach. Many residents of the 216-acre island resort had filed lawsuits to halt development there. After preparing together with Kreps DeMaria, the developers granted the interview, accurately discussed the litigation, and ultimately defused interest in it. The executives at “60 Minutes” canned their planned report on the island infighting.

Founding partner Israel Kreps and Sissy DeMaria, both graduates of the University of Miami, have a nose for news and deep respect for the demands of journalism, and have built a team of public relations professionals who share their keen sense of the day-to-day needs of editors, reporters and other types of media gatekeepers. “We honor the media process, and consequently, have earned their trust,” Kreps said. “We have developed a longstanding reputation of integrity and good news judgment that is respected by journalists worldwide.”

But the agency has a whimsical side, too. When a client needs a good old-fashioned publicity stunt, Kreps DeMaria consistently creates cures for media attention-deficit disorder. Consider the agency’s offbeat idea for a construction contractor who wanted publicity for pouring a massive amount of concrete. Coastal Construction, a longtime client of the agency, made local and national headlines for pouring almost 14,000 cubic yards of concrete for the foundation of a luxury Sunny Isles Beach highrise condominium, Trump Royale, which was being developed by another agency client, Michael and Gil Dezer of Dezer Properties. It was the largest concrete pour in Florida history, and Kreps DeMaria went wild promoting the event in advance. “The movie King Kong was coming out, so we decided we were going to dub this a ‘Kong-crete’ pour. We ordered a giant gorilla off the Internet, and we hoisted the gorilla on a crane, and sent the media toy concrete trucks,” DeMaria says. “What’s the value of a concrete truck? Nothing. But it captured the media’s attention.”

More glamorous assignments include launching the public relations campaign for the most exclusive private-island resort in the world, Musha Cay in the Bahamas, whose guests have included Microsoft founder Bill Gates, billionaire Warren Buffet and television celebrity Oprah Winfrey. The PR agency also introduced the J.W. Marriott Marquis Miami hotel and managed the publicity of the stunningly beautiful Setai resort hotel in Miami Beach, which the agency also helped to name.

DeMaria joined the firm in 1996 as a name partner, and “from the beginning, I knew we would have a successful, longterm partnership,” Kreps says. “Sissy has keen insight, amazing contacts and is driven to help clients succeed. I would pit our collective skills against any agency in the country.” Their agency has about 40 clients, ranging from start-up entrepreneurial ventures to renowned international corporations. Many of the clients comprise a who’s-who list of leaders of their respective industries. They include law firms Colson Hicks Eidson, Foley & Lardner, Tew Cardenas, Levine Kellogg Lehman Schneider + Grossman, and Kozyak Tropin & Throckmorton, representing a wide range of practice areas including commercial and business litigation, class action litigation, bankruptcy, labor and employment, securities, white-collar criminal defense, product liability, professional malpractice, international law and crossborder transactions.

The last five years of sluggish business conditions have been a challenge. After banks around the world stopped lending to each other during the financial panic of late 2008 and a collapse in real estate values deepened, Kreps and DeMaria foresaw reduced retainer revenue from residential developers and started signing new clients in other sectors of the economy, particularly legal services. Recently, the agency was retained to assist the international law firm of Foley & Lardner promote the launch of its Latin America practice group based in its Miami office.

The agency also has diversified into marketing collateral production, advertising and graphic design, as well as multimedia services such as website design, search engine optimization, social media and video production through the launch of its digital marketing division, PR on the Net. These additional capabilities have successfully generated new sources of fee income and made Kreps DeMaria more of a one-stop shop for marketing assistance.

Kreps DeMaria often helps to showcase the talents of clients by maneuvering them into media coverage of dramatic news events. For example, when the Costa Concordia cruise ship ran aground earlier this year off the coast of Italy, the agency secured interviews with journalists around the world for client, Mike Eidson, a top trial attorney and nationally recognized authority on product liability. The agency also successfully promoted Eidson as an expert source of information for media reports on automaker Toyota’s recall of nearly 8 million vehicles due to problems with unintended acceleration. Their extraordinary sense of the newsworthy also helped the Kreps DeMaria team gain positive publicity for a veteran bankruptcy attorney when American Airlines parent company AMR filed for bankruptcy.

This year, the PR agency has expanded its footprint in Florida. In January, Kreps DeMaria opened an office in Naples to better serve clients on the Gulf Coast of Florida. Among them are the Sanibel Harbour Marriott Resort and Spa, a high-rise condominium called Tavira at Bonita Bay, a mixed-use development in Naples called The Strada at Mercato, and Southwest Florida’s luxury real estate leader, Premier Sotheby’s International Realty. Six months later, the agency opened an Orlando office, which complements another central Florida location in Vero Beach, to serve as a base for clients such as Orlando World Center Marriott, the largest Marriott property, and Renaissance Orlando at SeaWorld. The agency has begun exploring possible joint venture opportunities in New York City, too.

Kreps and DeMaria pride themselves on recruiting and retaining top talent and have also begun grooming the next generation of leadership at their agency. Cindi Perantoni, who was a student at Barry University when she started working at Kreps DeMaria as an intern, has risen in her 10 years with the agency from receptionist to partner. Her rise reflects Kreps’ and DeMaria’s philosophy of developing talent internally, rather than acquiring personnel through purchases of other agencies. “This is a service business, so there are no assets,” DeMaria said. “Your people are your assets.”