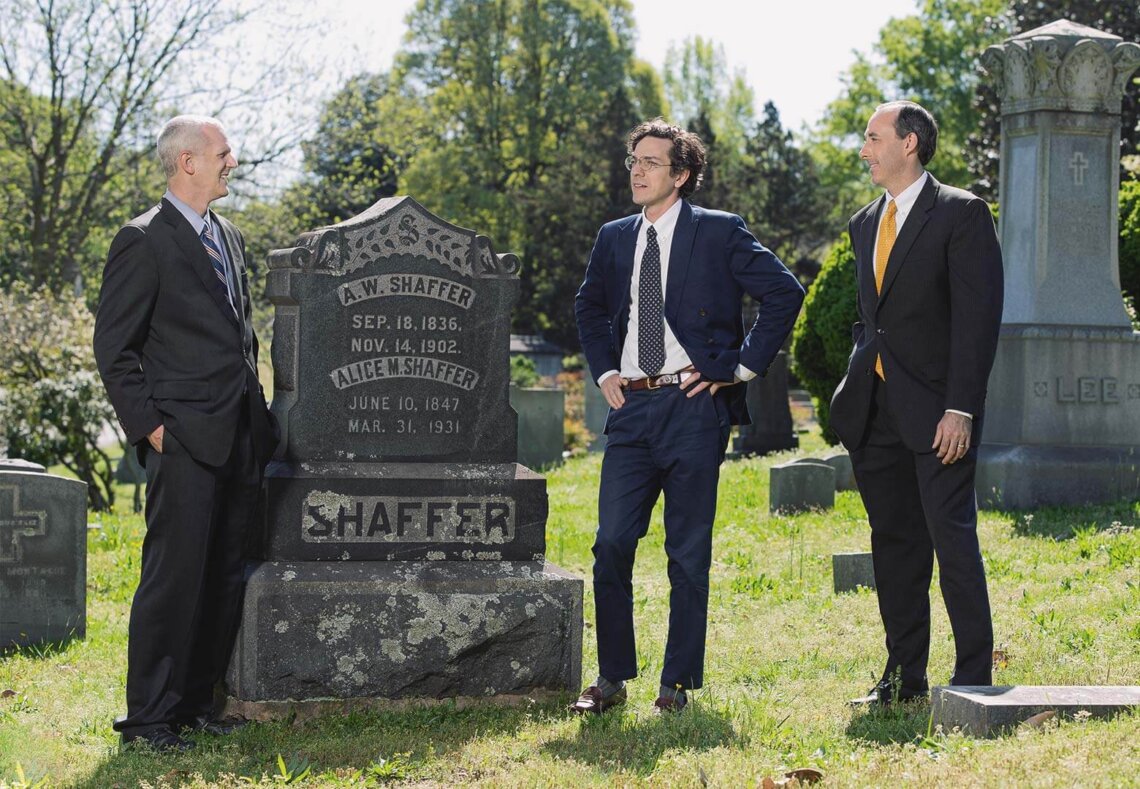 The staff at Oakwood Cemetery is used to visitors sauntering around-especially on warm mornings in early spring-but not necessarily to having four men in suits with a cameraman in tow, heading up to the old section near the Civil War graves. A dignitary from the office hustles out. Questions are posed. Answers are given. Hands are shaken and the good feelings native to warm mornings in spring are restored.

They stand at the grave of A.W. Shaffer and Cary bankruptcy lawyer Travis Sasser explains its significance. “Shaffer was an officer in the Union Army during the Civil War. He was a carpetbagger who moved to North Carolina after the war and, among other things such as fighting the KKK, served as the Bankruptcy Registrar in Raleigh during the temporary Bankruptcy Act that existed from 1867-1878. The Bankruptcy Registrar position was an earlier iteration of the Bankruptcy Judge. Once that act expired, he did other things for 20 years. But when the next bankruptcy law came back in 1898, he was the attorney that represented the first debtor in Raleigh to file under the new law.”

“I think an appreciation and knowledge of history adds to our understanding and enjoyment of bankruptcy practice.”

“I think an appreciation and knowledge of history adds to our understanding and enjoyment of bankruptcy practice.” Travis serves on the bankruptcy court’s history committee and recently completed a lengthy paper about why, unlike the rest of the United States, North Carolina and Alabama, are not part of the United States Trustee Program. Travis also appreciates that the bankruptcy court is headquartered in the Century Station Building in Raleigh. “It has the best exterior edifice and trial courtroom in Raleigh.”

Travis first launched Sasser Law Firm in 2000 as a solo practitioner. In 2008, the practice expanded when his younger brother, Philip, joined the firm. Cort Walker joined in 2010. They all serve as deacons at Sovereign Grace Church in Apex.

“Bankruptcy is often a middle-class problem because you are attractive to banks who want to lend you money in the first place,” said Philip. “We tell clients the situation you are in is common and we can help. I’m aware that people are telling me things they might not even tell their extended families about. We aren’t doctors or pastors, but it’s not dissimilar in some ways. We see people when they’re the most vulnerable.” In addition to middle-class persons, it can also help entrepreneurs and business people who are exposed to risk when a reversal occurs and it can even help working class debtors trying to stave off eviction or a utility disconnect. “It really runs the gamut,” according to Travis.

The firm has seen a sharp increase over the last five years in bankruptcy caused by merchant cash lenders making loans to businesses. “They are like payday lenders for small businesses and they lend out money very easily and the repayment terms can be difficult for businesses to meet. It seems like almost every chapter 11 small business case we filed has at least one and maybe three or four lenders behind it taking daily drafts from the company’s bank accounts,” said Philip.

“We have a large number of clients with federal or state tax issues who need help reorganizing that tax debt or discharging some of it. A bankruptcy case creates a context to deal with these matters. A lot of people don’t even know how to communicate with the IRS or department of revenue. A bankruptcy case can provide a context to address the correct amount owed and an appropriate repayment scheme,” said Walker.

Working with family law attorneys is another of the firm’s niches. “Separation and divorce is a common cause of bankruptcy filings,” said Travis. “We help the family law attorneys navigate bankruptcy on both sides, debtor or the non-debtor spouse. There are issues like dividing up property or debt, an attempt to collect support or modify support or seek an absolute divorce. There are a lot of very detailed things a family law practitioner needs to be aware of in terms of whether and how state court litigation is impacted by the bankruptcy case,” said Travis.

“Clients often think that chapter 13 or chapter 11 requires a repayment plan where all of their creditors have to be paid back in full. While that is sometimes the case based on the facts, it is more common for debtors to pay back very little of their general unsecured debts. A plan of reorganization is usually designed to pay back obligations like taxes or secured creditors, but not the totality of general unsecured loans,” explained Philip. 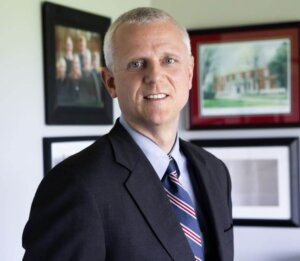 Travis Sasser grew up in Cary and earned a Bachelor of Arts from NC State in political science and a minor in history. While in law school at the University of Georgia he developed an interest in bankruptcy law.

He is an admirer of Abraham Lincoln. A photo from Lincoln’s second inauguration in 1865 hangs prominently in his office. He said the speech is one of his favorites.

“For a brief time (1841-1843) Abraham Lincoln was a bankruptcy attorney,” he continues. “That Lincoln could go from being a small-town lawyer representing individuals to go on to become arguably the greatest American president is inspiring.”

Travis spends time with his sons through Royal Rangers, a ministry for boys. “It’s a great opportunity to teach practical skills, an appreciation of the outdoors and instill values to the boys in my church while also spending time with my sons.” He enjoys history and occasional travel and as a result his children have visited an above-average number of battlefield sites including Normandy, Shiloh, Pearl Harbor, Gettysburg, Monte Cassino, and Bunker Hill among others. They have also visited Springfield, Illinois to see Lincoln related sites.

PHILIP SASSER: THERE IS A LEGACY 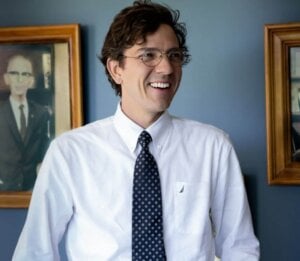 Photos of Philip and Travis’s grandfather and great grandfather hang on the wall in Philip’s office. Both were lawyers and judges in Ohio. “It’s rewarding to feel like that continuity between generations, and that even though I have a computer on my desk that grandpa wouldn’t have had, a lot of the work we are doing he would recognize and appreciate.”

In 2005, while Philip was earning his Juris Doctor at Campbell Law School, a major federal bankruptcy reform was signed into law.

“The law changed significantly in 2005, and it was an exciting time to be focused on bankruptcy,” he recalls. Three years later, the Great Recession and financial meltdown grabbed the nation by the throat. “I remember driving to work early one morning, still dark out, and I heard on the news in my car that Lehman Brothers had filed for bankruptcy. In law school, bankruptcy was an eccentric thing to be interested in, but the first few years out of law school, I was right in the thick of a topic of law that was in the news every day.” 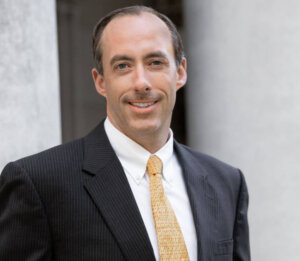 “Bankruptcy doesn’t mean someone is a failure,” said Cort Walker. “Our worth as individuals doesn’t come from the balance in our bank account. There is dignity and worth in every person that only comes from God, and we seek to represent people with that in mind. Bankruptcy can be an opportunity for a fresh start.”

Walker’s approach to bankruptcy law is very much a function of his unique historical path.

He was born and raised near Yakima, Washington, on a portion of the Yakama Indian Reservation. He earned a degree in biblical studies from Grace College in Indiana then attended Grace Theological Seminary. Walker served as a pastor for four years in Johnstown, Pennsylvania where his wife overcame a bout with cancer. He earned his Juris Doctor from Regent University in Virginia Beach, Virginia and then spent two years as a judicial clerk with Associate Justice Edward Thomas Brady at the North Carolina Supreme Court.

“I had an interest in becoming an attorney in high school and the desire never completely left me. I felt called to the profession to serve people.”

Walker said he draws on his life experiences when working with clients. “I hope my background helps me to be more empathetic and to understand that there are numerous factors at work with each client beyond just financial. Each client brings unique emotional, physical, intellectual, and spiritual dynamics to bear in any case. I think my experiences help me to listen and interact with clients on a broader level about life.”

Walker enjoys exercising with F3 Carpex, the Cary and Apex chapter of F3 which is a national network of free, peer-led workouts for men. “The three Fs in our name stand for Fitness, Fellowship and Faith.”