Sieben & Cotter: On Your Side 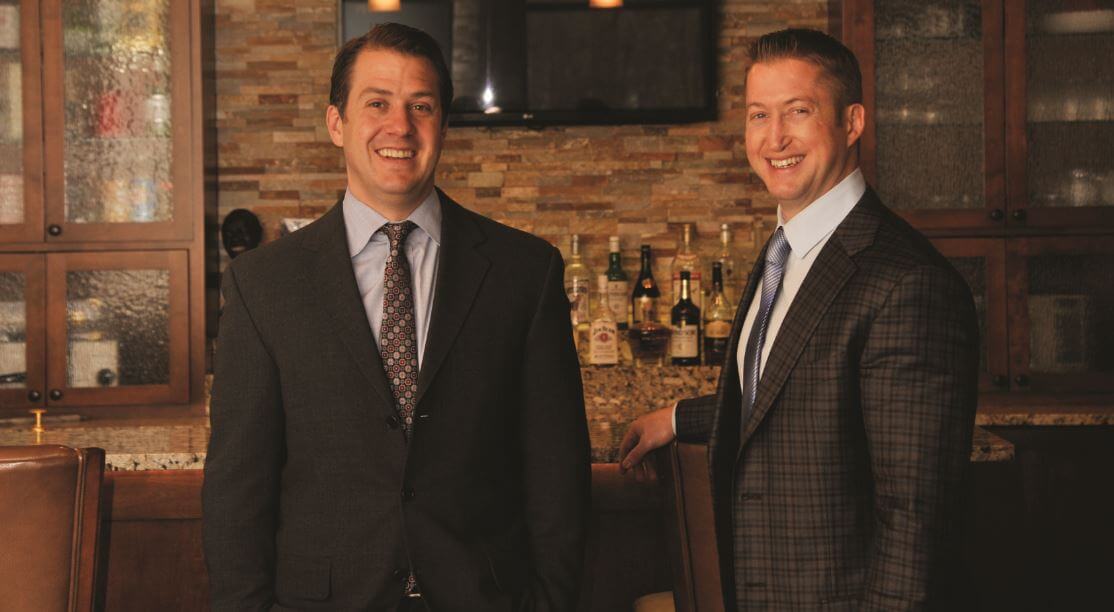 Whatever has made this someone’s worst day, attorneys Tom Sieben and Patrick L. Cotter are ready to listen, and listen without judgment. Their practice is founded on the belief that an effective defense starts with a holistic understanding of the person they are representing and the varied experiences that have led to this fateful moment in their lives.

Sieben and Cotter followed parallel paths in early life that intersected while they were each attending law school at the Mitchell Hamline College of Law. Both come from small towns in Minnesota, and both had attorney fathers dedicated to compassionate service.

Cotter said, “I’m from Austin, a Southern Minnesota meat packing town. My dad was part of a fourth-generation family farm. As an attorney, he primarily represented injured laborers and farmers. I grew up watching him help people, and it became engrained in who I am.”

A talented athlete, Cotter walked on the University of Notre Dame football team, then transferred and competed in football and track and field at the University of St. Thomas prior to law school. During law school, he clerked for the Fifth Judicial District and Second Judicial District Public Defender offices, and afterward served as a prosecutor in Dakota County, Sieben’s old stomping grounds.

Sieben was born into a long heritage of Minnesota legal and political contributors from Hastings. “My father, brother, three uncles and several cousins are lawyers,” he said. “We’re a very close family. My grandmother was alive all through law school, and her house was a hub for all of us. It wasn’t uncommon for two or three offshoots of our family to be there at any given time discussing law and politics.”

He attended St. John’s University and then William Mitchell (recently changed to Mitchell Hamline) with aspirations of serving in an elected position. Sieben and Cotter attended law school at the same time, but didn’t know each other well. When Cotter left his position at the public defender’s office, Sieben stepped in. Later, Sieben took his first job out of law school with a criminal defense firm in Dakota County, and he and Cotter often appeared on opposing sides of the same cases. “At the end of the day we’d meet at the gym and then go have a beer together,” he said. “It was fun doing that for two people who were supposed to be adversaries.”

The two developed an abiding friendship that led first to sharing an office and then to forming a firm together, Sieben & Cotter PLLC, where they provide honest and aggressive criminal defense and personal injury representation. “Our practice ranges from DUI to homicide, and everything in between,” Sieben said. “Over the last several years, our firm has had success representing clients accused of criminal sexual misconduct and assault offenses, and we continue to receive referrals in those matters. I enjoy helping people with those problems – they’re huge problems. The consequences that come out of a conviction – or even just charges – are far-reaching, and the potential for prison time is very real.”

Cotter added, “The majority of our combined work is felony-level cases. In addition to criminal sexual misconduct cases, Tom is currently handling several homicides, and I have some serious financial crimes and white collar matters. I am licensed in both Minnesota and Wisconsin, with major cases going on across the border.”

Sieben and Cotter are proactive and aggressive about the pre-charge phase of their representation, and are often able to knock out allegations before formal charges are made.

“We use a combination of strategies, including the use of an investigator, background checks and polygraph exams,” Sieben said, “and we develop witnesses law enforcement may not know about. We want to show a prosecutor the whole situation, not just what the police investigator chooses to show. Sometimes, seeing the complete picture dissuades charges.”

He continued, “Our system gives people the presumption of innocence, and just being charged with a crime doesn’t make you a lawbreaker. We want to show the government a complete picture of who our client is. What is their family upbringing? Their mental capabilities? Is there a chemical dependency that should be taken into consideration? Does the other side have an ax to grind with our client that they didn’t disclose? Is what our client did truly a crime, and if so, is it the same crime the state is trying to convict them for? Is there a more appropriate, lesser degree offense they should be charged with? If there is a conviction, is the consequence appropriate?”

Each of these attorneys has developed his own unique style in the courtroom, but they agree that being an effective trial attorney begins with being a good listener, and then adapting based upon new information and interaction with the parties. Further, it requires authenticity. “Neither Patrick nor I take a shotgun approach on argument; we like to take an approach that hones in on what is accurate and true,” Sieben said. “We pour our efforts into that, and make that argument with sincerity. It’s a lot more likely to be convincing; even though we often have to acknowledge the faults of our client in the process.”

Cotter added, “The bottom line is we practice with integrity. We give clients straight and honest answers, even if that means telling them what they don’t want to hear, like how a doctor sometimes has to give a patient bad news. We tell other lawyers the truth, and we tell the court the truth. But we always vigorously represent our client. We are dealing with the fabric of people’s lives, and it is an awesome privilege and responsibility.”

Their similar roots and shared values make this duo an effective team. As they continue their parallel life paths, they strive for professional excellence while also seeking balance for their young families. “We generally combine physical fitness with our business meetings,” Cotter said. “Being healthy is a core value for both of us and is especially important to finding balance in a profession where we deal with such weighty matters. We’re both blessed with wonderful wives who support us in taking care of other people’s families.”

Imagine someone you love on their worst day of their worst year. What would you want to be available to them? What kind of advocate would you seek out to tell their story? Who would be on your side?

Cotter expressed, “We are helping people at their most raw moment, and when you’re helping an individual, you’re also helping the family who loves them. One of the major tenets we were both raised with is that for those to whom much is given, much is expected. We’ve been given a lot in our lives. We feel we have a responsibility to make the most of what we’ve been given by making sure people are heard and receive a just outcome under the law.”