Younce & Vtipil My Grandfather Is My Client 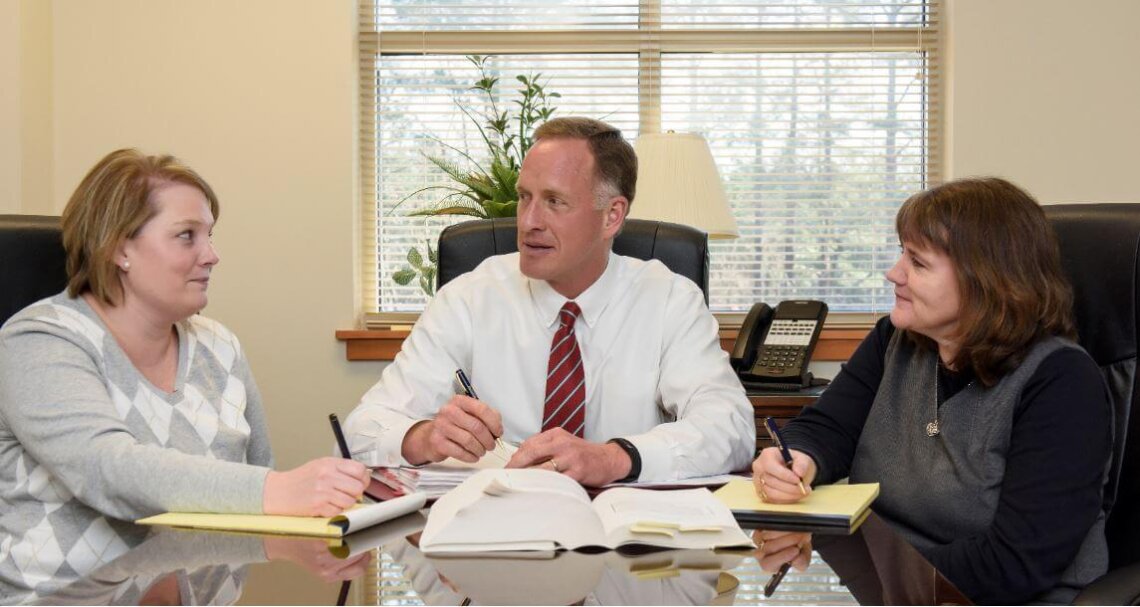 Huge signs announcing, “It’s a Boy,” are taped to Joe Baznik’s office door at the Raleigh-based firm of Younce & Vtipil along with a photo of him with his wife and new son.

In fact, family photos and kid-crafted artwork are everywhere in the suite. The five attorneys and staff members believe it contributes to the firm’s friendly and warm environment, “It’s very much an extended family. It’s not our words, it’s our actions,” said partner David Vtipil. The fact that a majority of the firm’s staff have been there for 10 or more years is a reflection of this philosophy.

The firm was formed over 15 years ago by Chip Younce and David Vtipil who have worked together for over 22 years. Baznik was named a partner four years ago. Younce & Vtipil handles personal injury, workers’ compensation injuries, Social Security disability claims and family law matters. Most of the practice is with clients in central North Carolina, but they often handle cases all over the state.

The three partners brought personal experiences to the firm that helped shaped its culture and warm office environment.

Chip Younce’s family moved to Raleigh in 1965 where they have grown deep roots. He earned his Juris Doctor at UNC. He served three years in the U.S. Marines as a judge advocate where he handled court martials. “I spent a lot of time in front of judges, more than I would not have had at that point in private practice. I learned that sometimes you’ve just got to act and not let fear of making a mistake cause paralysis,” he said. “It was in the year I served in Legal Assistance at Camp Lejeune that I realized that I would not be happy in the practice of law unless I was serving individual clients and their families.”

Joe Baznik was raised in Illinois. His mother and his grandparents came to the United States from Mexico. He became fluent in Spanish and learned about his Hispanic culture while being raised primarily by his grandparents while his parents worked.

“My grandpa was a sixth-grade educated, Hispanic guy from Mexico, a blue collar worker who worked hard for his family. He had a couple of injuries in the factory. If I’m able to help my client, I’m helping my abuelito. My client is my grandpa,” said Baznik.

His first exposure to immigration law was helping newly arrived Cuban immigrants as part of an internship while attending Thomas M. Cooley Law School in Michigan where he earned his Juris Doctor with distinction.

David Vtipil is from rural Virginia and earned his Juris Doctor from Campbell. When he was an undergraduate at Wake Forest University, he was the victim of a hit-and-run while out jogging. “My attorney never talked to me. I never spoke with him. All of a sudden, one day I get a phone call, ‘Hey, we got your settlement check here.’ I didn’t remember hearing anything about negotiation,” said Vtipil. “I learned from that experience; I always communicate with my clients. I listen to them and I’m there for them and I want them to understand the process.”

The bulk of Baznik’s clients are Hispanics who may have even less understanding of the complexity of the legal system.

“The Hispanic clients do require more hand holding, more attention to their cases. It’s something I am able to understand having come from a Hispanic background,” said Baznik.

“There is a machismo concept within the Hispanic culture and so if a Hispanic individual gets hurt on the job, they may not want to make a report, they are fearful they will lose their job. A lot of them are undocumented so they are afraid there will be some kind of immigration issue there. All they want to do is get back to work, work as hard as they can and get back to their families,” said Baznik.

An added complication is employers who try to classify their worker as an independent contractor to avoid paying workers’ compensation insurance and other expenses. “This practice is often found in the construction industry where injuries can be severe and life-changing. I tell my clients that they have the right to seek medical treatments and that the employer/defendant has to pay for it,” explained Baznik.

“Employers and insurance companies cannot use the undocumented person’s immigration status to their advantage in their cases,” Baznik continued. “I’ve had over 500 workers’ compensation claims involving undocumented workers and thus far it has not been made an issue.”

A CLIENT’S FUTURE AFTER THE CASE RESOLVES

“Although most of our cases settle out of court, if it is in our client’s best interest, we are ready, willing and able to take a case to trial,” said Younce. In all instances, they have a discussion with each client to review a risk/cost analysis of settlement versus trial.

“Our clients know we’ll always be there can go on for a very long time. I have one client that I have represented in the same claim since 1994. I have another since 1997. We are constantly doing work on those cases – getting medical care approved, dealing with late checks, lots of issues. I have 10 cases that I have been working on for in excess of 10 years. We have made a commitment to these people. They depend on us to take care of them,” said Younce.

“We also discuss with them what they are going to do with their lives after resolution of their case. We’re not financial planners, but we want to know they’re going to be able to positively impact their lives after we wrap up their case,” said Vtipil. He recalled a workers’ compensation client who went to three separate mediations with the insurance company offering more money than the time before. for them. Workers’ compensation cases “I asked him what he was going to do with his life once his case was over,” he said, “ I wanted him to plan for the future.” During the pendency of that case, the client went back to school and set himself up to make his way in the world. “The client appreciated that I did not push him to settle his case right away which allowed him the time to get his life in order,” said Vtipil.