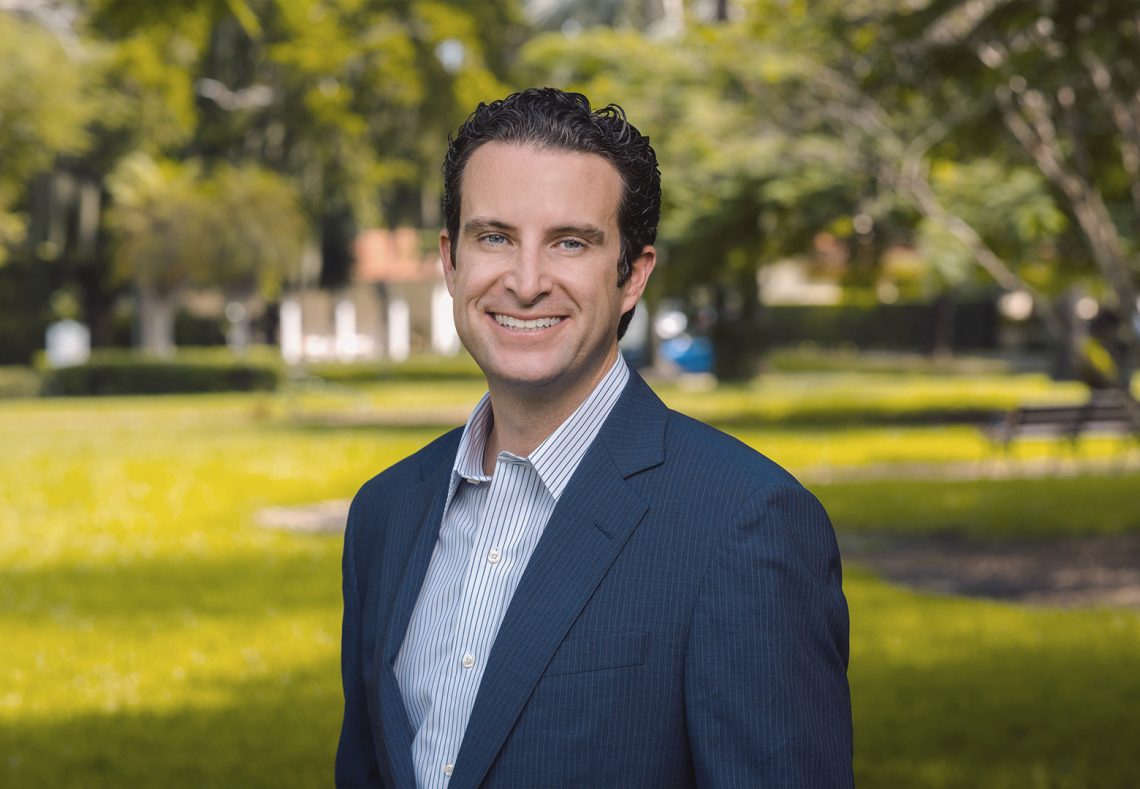 Proud son of Cuban exiles, Daniel “Danny” Diaz Levya says there was always an expectation that he and his sister choose professional careers to “make the most of the opportunities” for which their parents and grandparents had made so many sacrifices.

“The expectations of my parents and grandparents to be either a doctor or lawyer were very clear,” he says with a smile. “Always, along with their support and dreams, came this incredible sense of gratitude and the belief that it was our responsibility to make the most of these precious opportunities we had been afforded.

“There was not a single kitchen table conversation with my parents or grandparents that didn’t involve Cuba, Fidel Castro or expressing gratitude to this country for welcoming us and offering opportunities to succeed,” he continues.

Diaz Leyva’s grandparents were roughly his age when they left their home in Cuba to come to the United States, and his parents were the same ages as his children. “My grandparents had to leave their home and everything they knew, completely displaced, to start over.”

“I try to put myself in their shoes,” he says,“the sacrifices and challenges my parents and grandparents faced to have better lives for themselves and future generations is always at the forefront of my mind and consequently I live my life with a sense of gratefulness and appreciation.”

Diaz Leyva says he flirted with the idea of a legal career while in high school. While studying finance at the University of Miami, he came to the realization that his studies would continue beyond his bachelor’s degree. “I realized that everything touches the law, and everything is impacted by the law. I came to believe that becoming a lawyer would be incredibly useful, and it was then that I decided to go to law school.”

Whether a “sign” or just strange coincidence, Diaz Levya’s first year was imprinted with an ominous, yet very personal date.

His first day of law school landed on his birthday. September 11, 2001.

“All the horror, calamity and incredible heroism that day wrought only served to cement my decision to become a lawyer. I experienced a renewed appreciation for our country, respect for institutions and laws, and the desire to be an advocate.”

What influences led Diaz Leyva to this area of the law?

“An undergraduate degree focused on business coupled with some of my father’s work that touched on real estate, and it was an area that I was always interested in, helped pave my path,” he says. “Also, many of those in my circle of friends are involved in various aspects of business, real estate, and investments so it seemed like a natural direction for me to become a trusted advisor in those areas.”

Born and raised in Miami, Diaz Leyva attended both undergraduate and law school there as well. His deep roots within the community and his intimate knowledge of the history and people of his hometown, give him a clear advantage.

“I recognize that I have a leg up,” he concurs. “I went to neighborhood schools and grew up with friends whose parents had successful businesses which gave me a window into that world. Also, I think it helped that I had the opportunity to work while I was in school which gave me that hands-on, real world experience.”

Even the so-called “self-made man” relies on others to help pave his way. Advisors, colleagues and mentors can make a significant impact on a person’s life and career. Diaz Leyva is no exception.

“Mentors have actually helped define my path,” he says. “Whether it’s contemporaries who helped me along the way suggesting classes that I take, guided me toward the right clubs, organizations and even nonprofits; or others, such as teachers, lawyers or family members, I’ve been blessed to have many people involved in my life who truly care about me.

“I guess it’s cliché to say, ‘try to find your path’ but that’s definitely something I believe in and would advise anyone trying to succeed in life,” he says. “Try to do the best that you can, focus and listen to your mentors. You’re going to learn from both their successes and their failures. These are all things that I’ve tried to follow along the way, but I also feel it’s very important to give back.”

It becomes apparent that the lessons learned at the family table have stayed with Diaz Leyva, regardless of where he is in life or how much success he’s experienced.

“I’ve been blessed with so many opportunities and I try to always remember there are so many people who haven’t had the same positive experiences or opportunities and it’s incumbent upon those of us who have to reach out and give back,” he says. “It’s something that I learned from my parents and grandparents and I in turn try to teach my own children.”

To this end, Diaz Leyva is actively involved in several organizations and nonprofits that serve the community. While he’s quick to lend time, money and support to virtually any worthy cause, the one that remains closest to his heart is education. A vocal and active advocate for educational initiatives, Diaz Leyva even served on the board of trustees of Miami-Dade College.

“I believe that education is the great equalizer,” he says. “Education certainly differentiates everyone and sets you on your own path. Generally, I believe that the greater your access and use of education, the greater your opportunities. I’m very grateful for the educational opportunities I was afforded and that resonates with me that all these things were made available to me because of the efforts and sacrifices of those who came before me.

“I feel we all have a duty and responsibility to make better and more educational opportunities available to a greater number of people.”

Diaz Leyva “cut his teeth” working for several large law firms during the first decade of his career. There, he gained not only valuable experience but the respect of his colleagues. This also provided a secure backdrop for him to have the knowledge and confidence to open his own firm.

With the support and trust of his close inner circle, he founded Diaz Leyva Group with fellow attorney, Michael Gil, focused on advising individuals and small business owners.

From the outset, Diaz Leyva says it was integral to the culture of the firm they wanted to build to ensure a safe, friendly and supportive environment.

“We have a value-based culture,” he says. “Basically, it’s all built on the Golden Rule – I treat people the way I wish to be treated, and we expect everyone on our team to do the same. Respect, concern and open communication are at the heart of this.

“Consequently,” he adds, “our hiring practices are very stringent because it’s crucial to bring on the right people who not only have the right skill set and work ethic, but even more importantly are people who mesh with our team.”

Over the years Diaz Leyva Group has expanded to include several types of clients, including home builders, developers, family offices, bank and non-bank lenders. As a result, the firm has also widened the geographic scope of service offerings to include statewide and national transactions.

So great was the success of the original Coral Gables office, that in 2019, the firm opened a second office in Vail, Colorado. This mountain office serves as the foundation of Diaz Leyva Group’s national expansion.

It’s quite telling that when this prosperous and obviously successful attorney was asked, “What do you consider your greatest achievement,” his response came without hesitation.

“My family,” he says, fairly beaming. “My wife Cristy and I have been married 11 years. We have two wonderful kids, Danny Jr. who is 9 and our daughter Adriana who is 7. We have a home in Colorado where we love to do things together. Everyone in the family enjoys the outdoors and activities such as horseback riding, hiking, skiing or just soaking in the incredible beauty. Sometimes it’s almost a spiritual experience.

“I want to be a good, involved father first and foremost,” he adds. “Sometimes it gets a little tricky trying to juggle my practice, my involvement in various organizations and family life, but when push comes to shove, I know my kids need me the most. Especially right now. These are the critical years through adolescence, and I plan to be present.”

Whatever his secret, Diaz Leyva seems to have found the recipe to grow both a dynamically successful practice as well as a close-knit, happy family. No doubt his life is exactly the kind of American Dream his grandparents had in mind when they arrived on U.S. shores so many years ago.