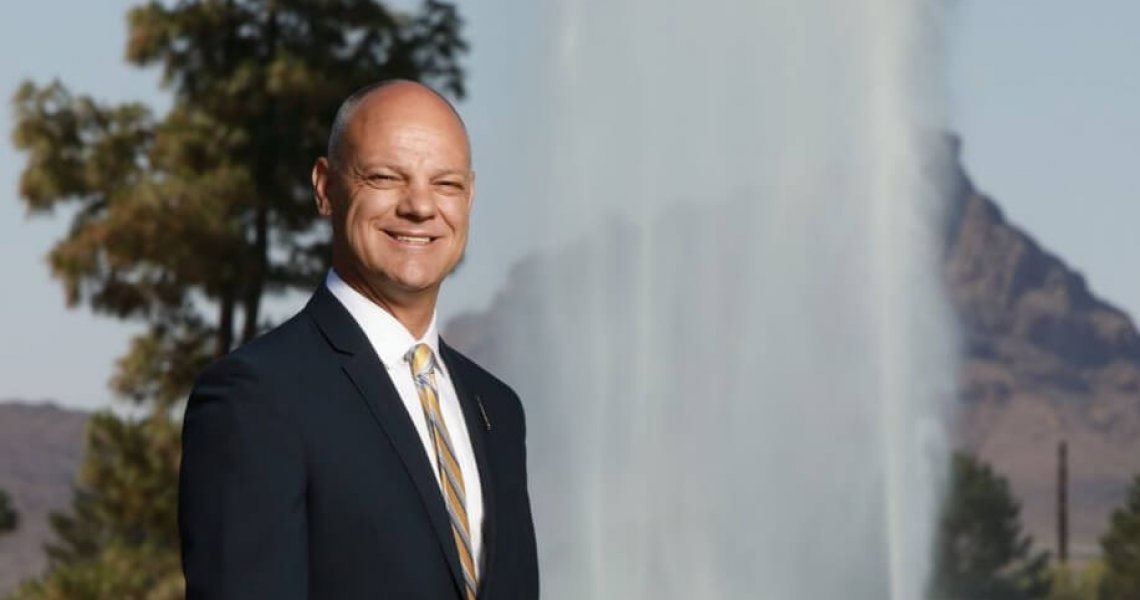 In today’s fast-paced world, information, services and even people move quickly – coming and going with ever-increasing frequency and speed. Choices have never been greater and the next bigger, better, faster version of virtually everything is waiting just around the corner. Maybe that is why people seem to have a difficult time committing to anything, including one another.

Therefore, it’s so refreshing and inspiring to discover someone who is not only fully committed to his family and clients, but also the community that he calls home. Celebrating his firm’s 10th anniversary in Fountain Hills, attorney and fully engaged resident Tait D. Elkie is a sterling example of what integrity, dedication and commitment can bring to any community.

Fountain Hills holds many special ties for both Elkie and his wife Michele. “We had our first date in Fountain Hills, and later were married at Fountain Park. It goes without saying that Fountain Hills is very important to us and our future,” he says. “Now, we are happy to raise our daughter, Emilie, in this friendly community which has been so good to us and means so very much.”

These are just some of the reasons why Elkie named his firm Fountain Hills Law Firm, further evidence of his commitment to the people and businesses of this dose community.

Elkie’s seeming innate predilection to serve was certainly nurtured during his years of military service. Enlisting in the U.S. Marine Corps when he was 17 years old, Elkie served in Operations Desert Shield and Desert Storm in Saudi Arabia and Kuwait in the First Gulf War, and in Operation Restore Hope in Somalia. He completed his four-year enlistment with an honorable discharge for his service and earned the rank of sergeant.

“The Marine Corps had the biggest effect on my life,” he says. “The Marine Corps taught me discipline, respect, camaraderie and a strong work ethic. These traits have served me well in the practice of law’’

Indeed, Elkie remains active today with local veterans’ organizations. He is a member of the American Legion Post 58 Color Guard, is former judge advocate for the Veterans of Foreign Wars Post 7507, and currently serves as commandant of the local Marine Corps League Detachment 1439. Elkie is particularly proud of the fact that the Post 58 Color Guard recently placed first at the American Legion State Convention.

In addition, he serves as a court-appointed attorney for the city of Scottsdale and represents veterans who choose to participate in the East Valley Regional Veterans’ Court. “The primary goal of the Veterans’ Court is to assist veterans who have been charged with an offense, with obtaining services and treatment that target the individual needs of the veteran. The services include treatment for substance abuse or mental health issues, education, homelessness, and other benefits that they have earned as part of their service to our country. If successful, the veteran may earn a dismissal of their case, or receive a reduced charge or penalty”

As a veteran, Elkie is able to speak the language of his veteran clients and most of his meetings with veterans start off with bonding over stories of their experiences while serving in the military. Elkie has also publicly spoken on veterans issues in the past, and was a guest on PBS’ Arizona Horizon with Ted Simons where he spoke about veterans’ contributions to their local communities once their terms of service were completed.

“I first realized I wanted to be a lawyer when I was in the Marine Corps about a year before I got out. The field of law intrigued me, and I knew then this would be the career path I would take once I completed my term of enlistment. Looking back, I have made only two career decisions in my life. The first was when I was 7 years old and decided I wanted to become a Marine and the second was my decision to become a lawyer. Once made, I never wavered from either decision, and have never regretted the choices I’ve made”

Once he completed his service in the Marines, Elkie enrolled at Arizona State University where he earned his bachelor’s degree, and later attended law school at California Western School of Law in San Diego.

Opening his practice in Fountain Hills, Elkie experienced the usual growing pains and humble beginnings. Through dedicated service and consistent, compassionate representation, the firm has grown steadily over die years becoming the most widely recognized firm in Fountain Hills.

“I started off in a very small office with no windows where I could barely fit a desk and two chairs,” he recalls with a smile. “The decor has changed, and certainly we have stayed abreast of the advances in technology, but the culture and goals of our firm have remained unchanged. We pride ourselves on our client relationships and success rate in representing them.”

Retaining an intimate and family-like quality, Fountain Hills Law Firm staff includes a small but highly skilled group of professionals including Elkie’s wife, Michele, who has worked as the office manager since he opened his doors.

As the firm has grown and evolved, Elkie has pared down those areas of law in which he chooses to focus. Today his practice is centered primarily in three areas – estate planning, personal injury and criminal defense.

The business philosophy practiced at Fountain Hills Law Firm is basic- always be honest and up front with people, do the best job you can, and treat others with respect.

“We view clients professionally, but we treat them like family from the moment they walk in,” Elkie says. “We have done our best to create a comfortable environment, so our clients begin to relax the moment they walk through the door. When someone finds that they need a lawyer, their anxiety and stress levels tend to be very high. My staff and I work with our clients to achieve the best possible legal result and take the burden of the situation off their shoulders.”

According to Elkie, he and his team feel a true sense of accomplishment when they’re able to help a client through a confusing legal process. “I know I’ve done my job when clients leave my office saying it was a heck of a lot easier than they thought it would be.”

The legal needs of each individual client continue to be the number one priority, and Elkie sometimes even tells a potential client that he or she does not actually need the services of a lawyer. “I’m not afraid to tell people, ‘Hey, you don’t need me for this’ or ‘Your money is better spent using it for another purpose to help resolve your specific legal issue.’ People appreciate a lawyer being honest, and not just telling them what they want to hear. My practice has been built on that philosophy. I will never take on a case unless I truly believe I can help the client.”

Elkie and Michele started the law firm together and have worked together to build it to what it is today. It has been a labor of love personally and professionally. Elkie has been an active member of the Fountain Hills community with service on various nonprofit boards and participation in youth activities.

In addition to running his own law firm, Elkie’s involvement with his community has even extended to service on the Fountain Hills Town Council. Elkie was elected in 2010 to a four-year term, during which time he also served as the town’s vice mayor. “I was honored to be elected to serve our town and have found that my skills as a lawyer served me well as a town councilmember,” Elkie says.

Public service has always been and continues to remain a top priority for Elkie and even more so now that he and Michele are raising their daughter in Fountain Hills.

“She is the love of our lives, and we love knowing she’s growing up in such a wonderful community of people,” says Elkie. “Ours is a town of volunteers and service-oriented residents who truly care for one another.

“We’re excited to be celebrating our 10th anniversary,” he adds, “and were looking forward to the next 10 years in Fountain Hills.”