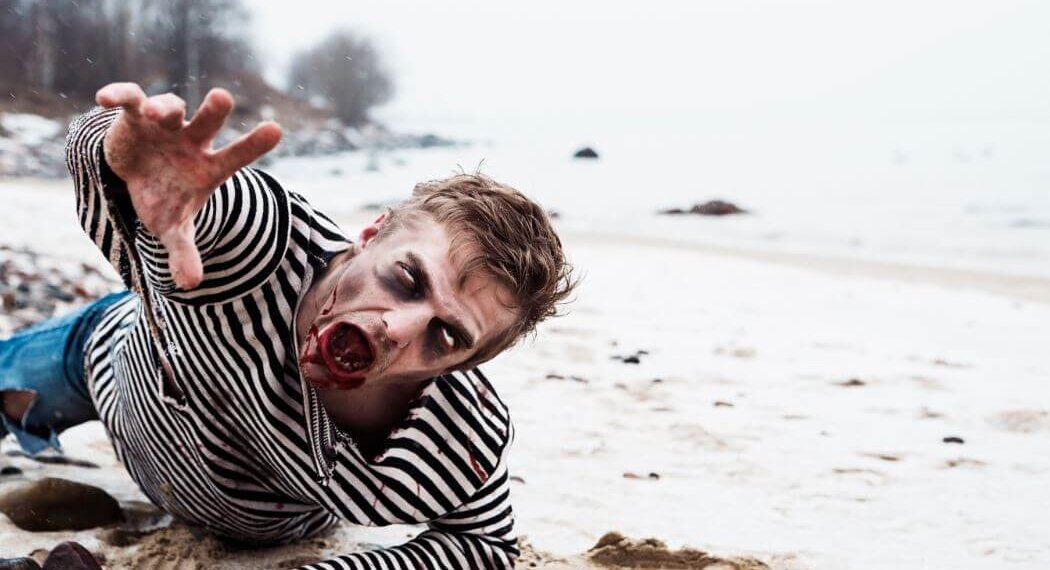 October and Halloween are times for scary creatures like witches, werewolves, ghouls, ghosts, vampires and the latest rage … zombies! We are about to embark on Season 7 of the extremely popular TV series, “The Walking Dead.” Over the years, there have been a plethora of zombie-themed films, such as “Dawn of the Dead” (1978 / 2004), “Army of Darkness” (1992), “Shaun of the Dead” (2004), “World War Z” (2013) and “Pride, Prejudice and Zombies” (2016). You can even participate in the fun each year by putting on makeup and blood-splatter for the annual Minneapolis Zombie Pub Crawl, which bills itself as “the world’s first and largest festival of the crawling, partying dead.”

What does any of this have to do with trademarks? Well, a trademark that is in use is active or “live.” A trademark that is no longer in use is something other than “live.” Read on to learn about the curious intersection of intellectual property and the undead, otherwise known as “zombie trademarks.”

What is a Zombie?

Although there is no definitive scientific or primary source (other than Wikipedia), we’ll take it on faith that a zombie is a human corpse that has become creepily reanimated. This unique condition may be created via Haitian voodoo or other scientifically accepted methods, such as magic or being bitten by someone with a particularly nasty virus. Zombies exist, at least in scads of popular fiction. Just accept that as true and quickly move on, but keep looking over your shoulder – just in case it isn’t.

What is a Trademark?

A trademark is a source and quality identifier, in that it tells a buyer that a product comes from a certain source and that the product is of a certain quality. A trademark is generally a word, phrase or logo that identifies to the buyer the source and expected quality for goods or services. In the United States, trademark rights are established by use of the mark in connection with the sale of goods or the rendering of services.

How Does a Trademark “Die?”

Misuse can occur by the failure of a mark’s owner to properly license the mark (e.g., no quality control oversight of the licensee), or by the failure to properly transfer ownership of a mark, which can happen if the mark is sold separate from its underlying business and associated goodwill (an event that, for purposes of this article, is appropriately called “an assignment in gross”).

These are the most common ways for an active trademark to become a dead trademark.

How Does a Dead Trademark Become Undead (Zombie Trademark)?

Once a mark has died, it is considered to have lost its significance as a source or quality identifier. A mark that has died from disuse may be a candidate to become a reanimated mark by another party since, some would argue, even such an abandoned mark may have some residual fame or residual goodwill (enough to make it attractive for a third party to try to adopt that mark for its own). In a sense, the mark may be considered to have just enough juice in it to be kept alive in the public’s imagination (i.e., still remembered as a heritage brand by at least some consumers), but is all but dead in a legal trademark sense because it is no longer in use by its former owner.

An example of a zombified trademark is the INDIAN brand for motorcycles, which was an iconic American brand for such goods from 1902 until 1953, when the Indian Motorcycle Company went bankrupt and ceased all operations. At times during the 1950s and into the 1970s, several parties attempted to capitalize on the memorable heritage of the INDIAN brand in the United States by importing motorbikes and labeling them INDIAN (with apparently some dubious claims of lineage from the original INDIAN brand owner). By fits and starts, “legitimate” rights to use the INDIAN brand were reestablished in the late 1990s and have now been acquired by Polaris Industries, which today manufactures INDIAN motorcycles in Spirit Lake, Iowa.

As a business lawyer, it’s unlikely that you will ever be involved in a legal battle over the rights to what might be called a zombie trademark. If you are, however, remember that the only way to stop a zombie is to destroy its brain. Z. Peter Sawicki and James L. Young