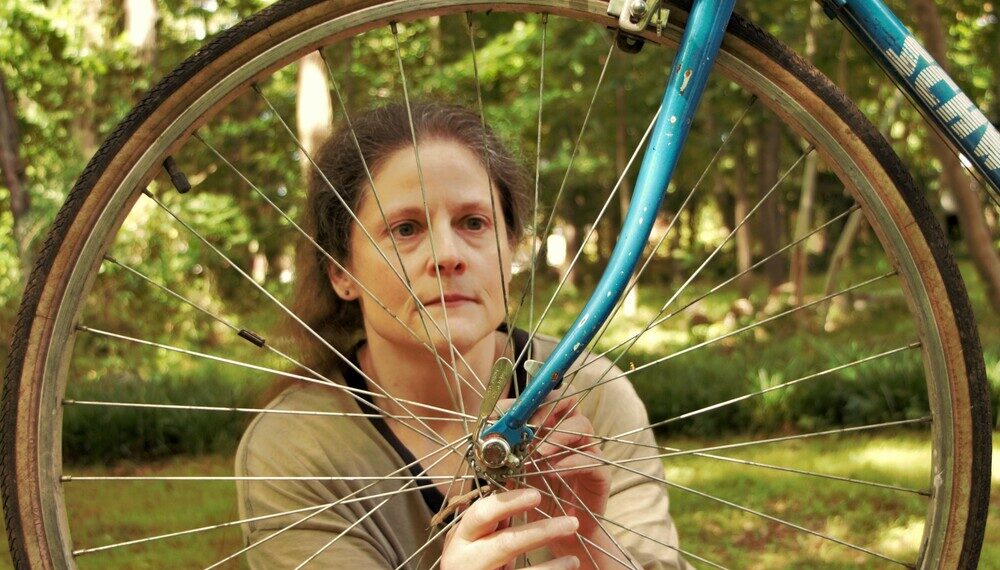 On a Sunday afternoon in July, Karen Wade grinned widely as she watched seven children zoom down the steep driveway of her Raleigh home on bicycles she had just given them.

The children were home in Cary for the summer with their parents before returning to Europe for missionary work. “Because they are missionaries, they travel a lot and cannot afford to move a lot of stuff with them,” explained Wade. “They’ll be leaving for Ireland at the end of the summer, so buying seven bikes, especially just for the summer, would have been a financial hardship for the family.”

I met Karen Wade last summer through NextDoor.com. I had just wrecked my expensive road bike and myself. When my wife and daughters decreed I switch to trail biking, I listed my bike for sale on NextDoor. Wade contacted me and agreed to swap my banged-up bike for a used trail bike and some cash. Standing in her basement crammed with bikes as she tuned up the trail bike, my reptilian brain triggered me to ask, “You’re not, by any chance, a lawyer, are you?” Not surprisingly, she said, “Yes.”

Wade explained that she had stepped aside from a lucrative IP practice in 2005 for health reasons. On her way to recovery, she met a family that had just arrived from Ghana and needed everything from forks to furniture. She soon fitted out their house by scouring websites and other resources like a modern-day Radar (Gary Burghoff, not Jamie Farr). She also found bicycles for the family’s kids and found her calling. “There is nothing like seeing the joy on a child’s face when they receive a bike of their own.”

Wade learned that there were lots of disadvantaged kids who needed bikes. “I believe it’s important for children to be able to have bikes,” said Wade. “Bikes are not just a toy; they promote independence and a sense of accomplishment. They help a child develop balance and stay in good health. A child with a bike does not get left out when the other children are riding their bikes.” For the first six months, Wade bought and found free bikes online. She raised money for buying bikes and bike parts by fixing and selling primarily adult-sized bikes. Wade used NextDoor, Craigslist, OfferUp, and LetGo to find, buy, sell, and give away bikes. After six months when she posted about her endeavors on Nextdoor, offers of bike donations started pouring in and the program grew rapidly. My wrecked road bike need $300 in repairs and had a resale value of $800. Wade used the proceeds to buy bike parts, which can be very expensive.

A lot of the bikes Wade receives or buys need repairs. Unfortunately, taking them to a bike shop is out of the question because of the cost. Anyone who has ever tried to fix a multi-speed bike watching YouTube videos will tell you that the time would have been better spent trying to do thoracic surgery with chopsticks. But for Wade, understanding the mechanics of fixing a bike is duck soup. In addition to a law degree from The University of Texas at Austin she has a Bachelor of Science in chemistry, a doctorate in inorganic chemistry, and was a Postdoctoral fellow at Los Alamos National Laboratory, where she initiated a research program developing materials to selectively remove strontium from nuclear waste.

“Bikes have pulleys and levers and your basic science of mechanical systems, but it becomes more like an art when you tune up the system to work more efficiently. There’s a lot of trial and error involved, although it’s less so when you have more experience. I also think it’s more of an art when I figure out or improve ways of making repairs.”

In its first year, A Bike For Every Tike donated roughly 100 bikes not including helmets, tricycles and scooters. Wade expects to donate 350 to 400 bikes before the end of this year.

“In addition to offering free bikes online, I work with two pastors from Durham to distribute the bikes. One of them runs an outreach program called Bread of Life Outreach. The other one goes to various housing projects in Durham to distribute bikes, scooters, and other toys. I have a partnership with Method Child Development Center, a Non-Profit Daycare Center, to supply bikes to their disadvantaged children. I am also supplying a girl’s and a boy’s bike in each size to The Church of Jesus Christ Outreach Ministries that gives Christmas gifts to approximately 100 families each year,” said Wade.

Wade continues to grow A Bike For Every Tike. The practice of law is now in her bike’s rearview mirror. “I’m lucky in that I have a wide range of interests. I enjoyed being a chemist, then I enjoyed being a lawyer. Now I enjoy repairing and donating bikes, and I don’t have to deal with the office politics of a law firm. As with all my endeavors, I like to focus on what needs to be done and do it to the best of my ability. I’m grateful to be able to do this and to make a difference in someone’s life.” For more information on donating a bike, bike parts, training wheels or helmets to email [email protected] or visit https://www. facebook.com/BikeProgram.