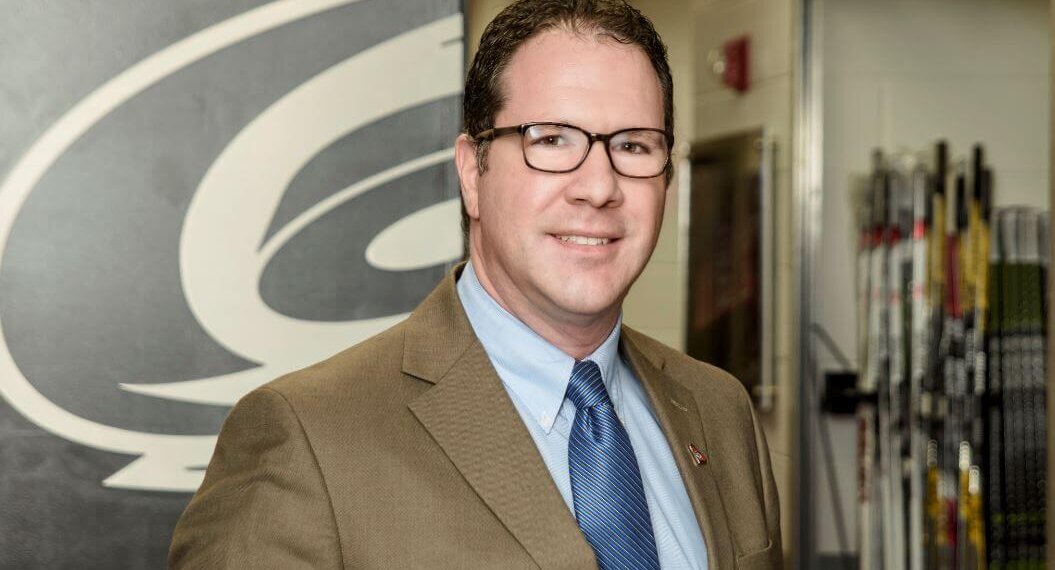 5 a.m. Billy Traurig logged on to the computer at his desk in the executive offices at PNC Arena. He rubbed the sleep out of his eyes having attended the prior night’s Ariana Grande concert. As senior vice president and general counsel for Hurricanes Holdings LLC, Traurig had handled the arena’s side of the concert’s contracts.

“I like to come in this early and work first on the more complex and unusual contracts that require editing and more research,” said Traurig, as he looked at the charter flight agreement for the Carolina Hurricanes.

Billy Traurig doesn’t look the part of a pro sports team attorney. Dressed like an accountant, he is modest and self-effacing with a dry sense of humor. Yet in his soul burns the fire of a hockey freak.

Traurig put on his first pair of skates at age four in his hometown of Waterbury, Connecticut. He was playing in leagues by age five, played club hockey in college and in adult leagues until recently. “When Canes stars, Rod Brind’Amour, Ron Francis and Glen Wesley were playing, I might have asked them for a tip or two,” he laughed. “It didn’t help.”

6:45 a.m. Traurig fine-tuned a transfer agreement for one of Hurricanes Holdings LLC’s minority shareholders. Peter Karmanos, Jr. is the majority owner of the company which owns the Canes, the Florida Everblades, a minor league affiliate of the Canes and Gale Force Sports and Entertainment which manages the PNC Arena.

Traurig got his start in arena management as a security guard and ticket seller at Worcester Centrum while in college. While working at various other venues, he did everything from cleaning toilets to security to booking bands. “It gave me a baseline understanding of the business.” He earned an MBA from Clark University with an eye to going into the financial side of arena management.

He then attended law school but dropped out after one semester. He later took a job as an assistant box office manager at Hartford Civic Center – then home of the NHL’s Hartford Whalers. When that team relocated to what is now the PNC Arena in 1999 as the Carolina Hurricanes, Traurig signed on as the arena’s finance director. “It was a huge challenge getting the financing started because nothing had been put into place in terms of policies and procedures,” he said.

8:30 a.m. Traurig met with team president Don Waddell to go over a ticket agreement. He and Waddell meet regularly to discuss contracts.

When issues like ticket scalping and parking lot revenue came up about 14 years ago the team’s execs looked to Traurig for legal advice. “I’m only a CPA,” he said. At the team’s urging he went to law school. By night, he attended NCCU School of Law and by day the Canes sent him legal work which he did under the tutelage of the team’s outside attorney. “It was the best internship you could ever imagine,” he said. Traurig saw how much the team was spending on lawyers and after graduating from law school, convinced the team to promote him to general counsel.

9 a.m. The staff of 130 started arriving in the executive offices. With the start of the Canes season about two weeks away, the hall outside Traurig’s office was a hub of activity. He closed his door to take a call from concert promoter Live Nation to discuss a major show they have booked at PNC. “We will get a rental/license fee plus food and beverage and parking revenues. The promoter gets the income from the tickets then has to pay the artist. The promoter takes all the risk,” explained Traurig.

10 a.m. Down on the ice, the day’s practice sessions for the Canes got underway. Upstairs, Traurig and Kyle Hanlin, senior director of communications and team services huddled for their annual pre-season review of the local telecast agreement with Fox Sports. Broadcasting rights are one of the most lucrative revenue sources for pro teams. The contract covers everything from on-air talent to cross promotions to advertising. “A big issue in broadcast contracts is back-end rights when the contract is about to expire,” Traurig said.

11:30 a.m. Traurig flagged down Canes General Manager Ron Francis who was dashing for RDU. They talked quickly about a minor league affiliate agreement. Their conversation took place in the office lobby near the trophy case that houses the replica of the Stanley Cup which the Canes won in 2006.

Francis is now in the Hockey Hall of Fame.

When Traurig was 13, his father took him to a Hartford Whalers game to see their rookie phenom, Ron Francis. “I remember thinking, this guy is only five years older than me, I want to be just like him,” said Traurig. “Now, Ronnie and I joke around. We see each other in the office down the hall. It’s just fantastic.”

1:30 p.m. As Traurig headed for a meeting on a lower level, a handful of freshly showered, unshaven, skinny teenage boys in shorts, flip flops and muscle shirts ran by. “I think I know maybe two of them,” said Traurig of the multimillionaire players and Canes hopefuls.

Traurig did not meet any of them when they signed their contracts. It’s a standard form contract that was agreed to by the NHL and the players association as part of the collective bargaining agreement explained Traurig. “We just fill in the blanks – club, name of the player, number of years, dollars and signature page.” The term, dollars and any signing bonus are negotiated by Francis.

3:30 p.m. Traurig stopped by The Eye, one of the gift shops in the arena that sells everything from Canes player jerseys to Canes hockey pucks. The NHL handles the vast majority of the licensing and the enforcement. “Players come and go. Coaches come and go. We have an ebb and flow of fans,” said Traurig. “So the name, the brand and the logos are exceedingly important for us. For some companies, the product is the brand. With us, the product changes all the time but the brand and identity has to stay the same.”

4:15 p.m. Back at his office, Traurig called the North Carolina Travel and Tourism Coalition which lobbies the general assembly on behalf of professional sports and entertainment companies, including the Canes, the Panthers and Live Nation on everything from ticket taxes to guns at venues.

“I have to keep a close eye on lottery and gambling laws because of all the sweepstakes rules we have to comply with like, win two tickets to a Hurricanes game.”

5 p.m. Traurig left to pick up sons, Jovon, 14, and Avi, 3, then headed home for a family dinner with Traurig’s husband Todd, with whom he owns the Edible Art Bakery and Dessert Café.

When the season starts in a few weeks, Traurig will stay around to watch about half of the Canes’ 41 home games. “I get that warm, fuzzy feeling during an event of people cheering and the excitement. It reminds me why I do this.”