Advocacy Program Is the Pride and Joy of Campbell Law 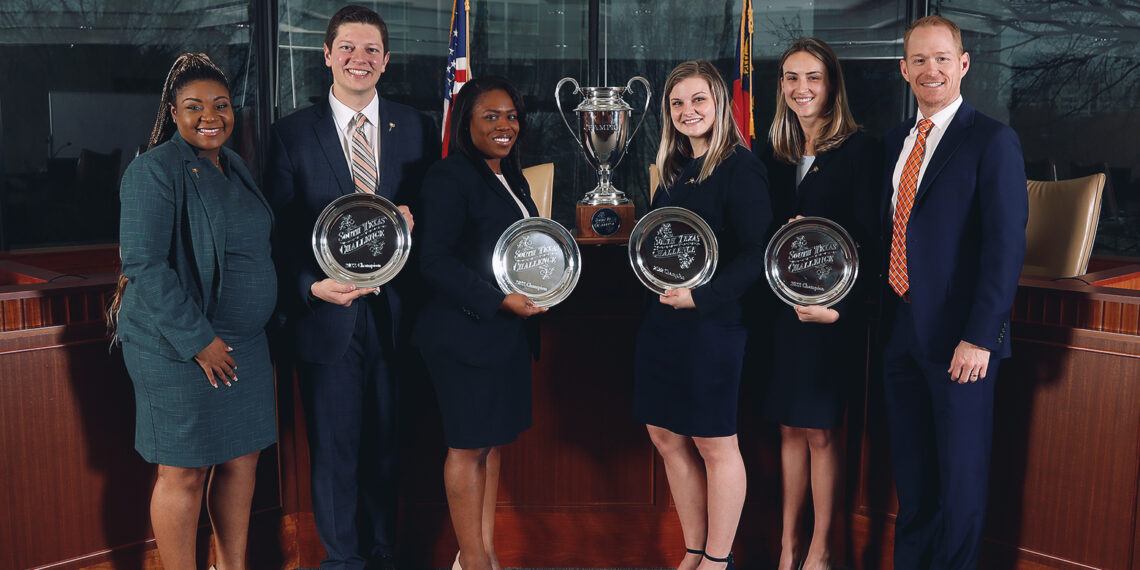 Campbell School of Law’s Mock Trial team of Miriam Sheppard and Camille Wrotenbery competed in the Top Gun National Mock Trial Competition at Baylor Law School in June. It was the eighth year in a row Campbell sent a team to the prestigious invitation-only event.

Sixteen law schools from around the country took part in the competition. The competition is unique in that teams receive case files 24 hours before the first round of the competition begins. They then have one day to decipher the most important facts of the case after reviewing hundreds of pages of documents to prepare for trial.

Campbell Law has had two final four finishes and two championship victories in the prestigious Top Gun Mock Trial Competition. Dan Tilly, assistant dean of students and academic affairs (former director of advocacy from 2011-2020) is the only coach to have coached two Top Gun champions (Jacob Morse in 2017 and Tatiana Terry in 2019). Throughout the past decade Tilly built a program rooted in hard work, sacrifice, and commitment.

These principles are those that have led to the maintained success over the past decade and are the very principles Tatiana Terry, Campbell’s first director of competitive advocacy, implements as the new leader of the program.

Terry won the Top Gun championship trophy in 2019 and the winner-take-all prize of $10,000. “It was a no-brainer to return to Campbell as director of competitive advocacy. When I was a student advocate developed friendships that will last a lifetime. I learned a lot about myself. The coaches on the team helped me figure out who I am and who I want to be. I wanted to pay that forward.”

Each year, approximately 80 2Ls and 3Ls compete for 25 spots on the mock trial and moot court teams each, and six spots on the client counseling, negotiations, and sports law teams each.

“The value of the competitive side is the opportunity for students to sharpen their skills against other lawyers to get the feedback from real judges and real trial lawyers,” said Tilly.

“They get to experience the kinds of things you just can’t learn from a podium or a lecture such as when a witness lies on the witness stand, when opposing counsel makes objections that require you to employ the rules of evidence or when you actually have to persuade a jury that this is a wrong committed by the other party, not just a plaintiff trying to get money,” Tilly continued.

Advocacy is a Core Function

“Advocacy is a core function of lawyering, which means advocating for another human being whether that’s in criminal court, a civil court, everything from a mother concerned about her child’s custody to a family concerned about eviction from their home to an individual seeking immigration status,” said Tilly.

Advocacy training begins in students’ second year and continues in their third year with required offerings in evidence and trial advocacy paired with an array of upper-level electives tailored to civil, criminal, and alternative dispute practices. In addition to receiving experiential training, students are required to learn the doctrinal law governing the admissibility of evidence in the courtroom by taking evidence in either their third or fourth semester.

“We place a high value and importance on teaching students to become great advocates because we are a practical law school,” Terry said. “We want our students to graduate, pass the bar, and immediately be able to get into a courtroom and try a case effectively, that is the pride and joy of Campbell Law.”