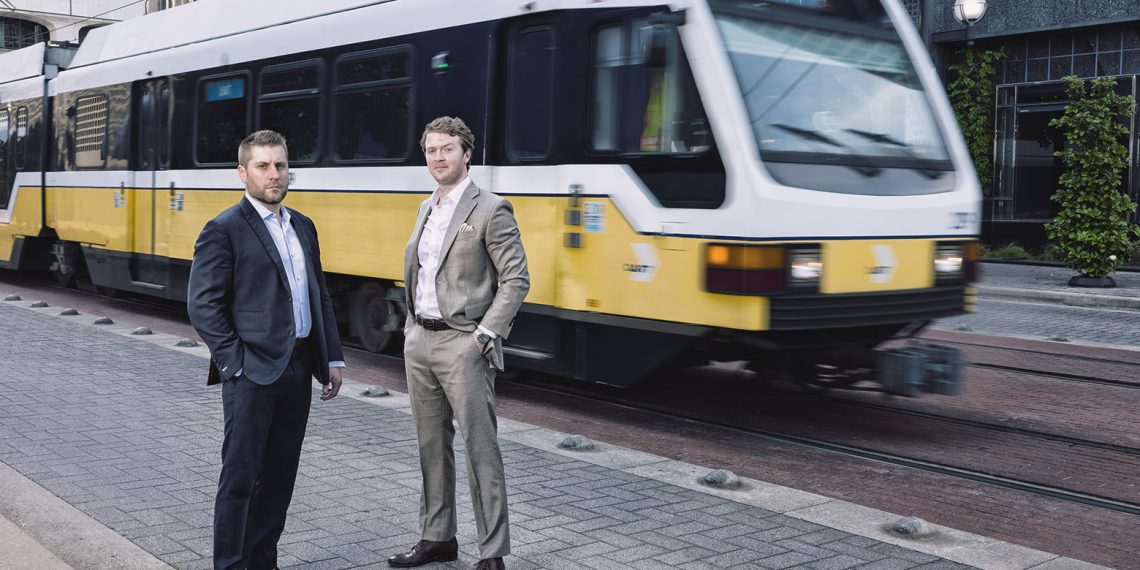 Like one of those fine-tuned muscle cars that dominated the highways in the sixties and seventies, Aaron Burke and Rob Bogdanowicz have integrated disparate backgrounds, skills, and abilities to dominate the fast lane in representing businesses and individuals in high-stakes disputes.

“How Aaron and I brought our different backgrounds together is an amazing story,” Bogdanowicz says. “Even our different practices and skills sets intertwined. Our friendship became something far more from a guy down from New York to a guy who’s from Midlothian becoming friends and now partners.”

The enormous business disruption caused by the pandemic energized the two attorneys to shift gears and form their own firm. Burke says, “COVID-19 forced Rob and I to drastically reduce work travel and gave us time to talk and think about the future. Thank God for that time, which allowed us to anticipate changes to litigation and adapt to the new legal landscape. Many business leaders held back to see what was going to happen. Thankfully neither of our practices suffered. We were able to keep our teams employed and actually add a few positions. Even though we saw the huge toll the pandemic took on our families, friends, and clients, we realized that business continued, our clients continued facing litigation challenges even while dealing with COVID. I said, ‘Let’s do it. We’ve been putting this off for a long time, so let’s do it now.’ The summer of 2020 we found space, signed a lease at the end of 2020 and opened our doors February 1st of this year.”

The two young attorneys come from very different backgrounds and life experiences, yet in a short amount of time have been able to create a successful and aggressive law firm and to have driven it into a leadership position in its field.

Muscling in on a New Career

Bogdanowicz is a self-described gearhead, something he comes by naturally. “My dad was a huge car nut who grew up in the muscle car era. As a kid, I helped him build his muscle cars, like his ’70 Road Runner. I learned the ins and outs of engines. He showed me how to modify things. He’d pitch in enthusiastically with me and my buddies when we worked on cars in the garage. I’d go to the dragstrip and race. I may have even done some street racing, I loved cars – still do.”

Bogdanowicz likens the thrill of racing to the practice of law. “There’s a rush you get when the light goes green and you smash the gas. I get that same rush when I get up in a courtroom and argue.”

Bogdanowicz was born in Brooklyn, New York. His decision to become an attorney and leave New York for Texas emerged from the realization of the cost in quality of life when living in the northeast. “I was selling Sprint phones at the time. Once a month they had a meeting in Manhattan and all the reps had to attend. I’d have to get up to make it to the train station for the 6:42, get into the city by at least 7:50 and then walk to another subway to get on another train just so I’d be there by 9 a.m. I’d leave the meeting by five and get home at 7:40 p.m. I said, ‘I hate this. I’m not doing this commuting.’ I didn’t want life in the city, especially like that.”

Bogdanowicz also had friends in the area because of their mutual interests in cars. “There’s a big car group I knew from internet connections, so we’d meet up down here. I fell in love with Texas and knew I wanted to be here. I looked at law schools, rolled the dice, and thankfully, ended up at SMU.

Before becoming an attorney, Burke taught special needs children outside Fort Worth in a low income school district and later at a charter school in Waxahachie, where he taught third, fourth and fifth grade science and social studies. He considered joining the Air Force as a pilot, but prior to going before an Air Force board his wife suggested he take the LSAT. “I had always pictured myself as going into practice at some point in my life. I applied and Baylor gave me a scholarship I could not pass up. My wife and I took that as a sign, so I ended up going to law school,” he says.

When he clerked his second summer at law school, he told the firm up front that he wouldn’t accept anything other than a litigation position. “That may seem stupid in retrospect considering how bad the economy was. I didn’t get an offer from them and I’m glad I didn’t considering how things worked out. Doing product litigation, trying cases, handling hearings, taking hundreds of depositions, and dealing with some of the best trial lawyers in the U.S. really opened my eyes to just how good the practice can be – training me to be the right kind of trial lawyer,” he says.

While in law school he planned a career in corporate law doing transactional work. When he did his first internship, one of his friends, a former judge, suggested he intern with an attorney in town, a Baylor Law graduate. Burke interned with Cass Casterline and studied and tried an arbitration with him. “I thought, ‘This does not feel like work. I have to do this.’ I went to Baylor and everybody thinks people go to Baylor to study to become trial lawyers. I went thinking I would be a corporate attorney, but I changed my mind after that experience. I realized how trial law really didn’t feel like work to me. It’s a lot of work, of course, but I would rather work for teacher pay as a lawyer than go back to teaching. Teaching was incredibly rewarding, but trying cases is the kind of job that does not feel like working to me.”

Burke has successfully represented clients involved in high-stakes litigation across Texas, in more than 20 states, and internationally. He guest lectures at Baylor Law School, and serves as a trial consultant, and monitoring counsel for individuals and a variety of companies involved in pre-suit matters and litigation throughout the United States.

Gearing Up in a Downsized Economy

Regardless of the downturn in the economy during the early days of the COVID pandemic, Burke and Bogdanowicz decided to move into the fast lane and open their own firm. Each was already successful in different firms, but each also felt the timing was right.

Burke says, “We thought we might be a little bit crazy, but we also thought if we’re weathering the storm now, we can tighten our belts, and put some money into this, survive and move on successfully. We realized that as far as competition was concerned there were very few people who practiced at our level with a statewide and even a national practice. Far fewer who have their own firm. Only a few have a client list like we have – high profile firms that get big cases and have big clients. Essentially, we figured that in a way we were already in the leadership position.”

The two met as members of the Dallas Young Lawyers Association. They became friends and over time explored the possibility of becoming partners in their firm. Bogdanowicz says, “Aaron said, I know you love it where you’re working and I’d love to work with you, but if we’re going to do business with each other, let’s do it together. That’s the way to do it. Aaron and I balance each other. What I lack or have less interest in, he does and vice versa. And that’s how we’ll succeed and stay ahead of the pack.”