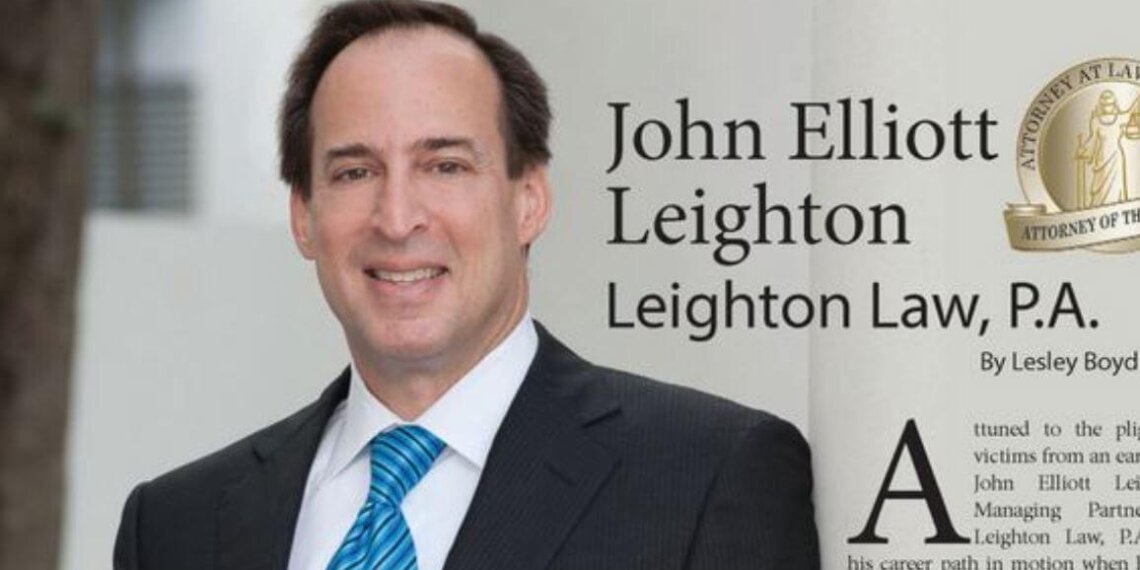 Attuned to the plight of victims from an early age, John Elliott Leighton, Managing Partner of Leighton Law, P.A., set his career path in motion when he was merely seven years-old. Recalling a nightly ritual, Leighton’s attorney father would tell stories about some of his ongoing cases, to which Leighton would pay rapt attention.

“I vividly remember one night in particular during which my father described a case that changed my life,” noted Leighton. “Back in those days, after customers purchased and finished a bottle of soda, they would return the bottle to the bottling company where it was disinfected with lye, turned upside down to drain, rinsed, refilled and put back on the shelves. My father represented a victim who had purchased a bottle of 7-Up that still had remnants of lye in it. Upon ingesting the drink, this victim’s throat was completely torn up. I was only seven at the time, but I decided then and there that my calling would be to help victims put their lives back together using the legal system as the catalyst.”

A Florida Bar board certified civil trial attorney with more than 27 years of experience, Leighton leads the team at Leighton Law, focusing on personal injury, product liability, violent crimes and what he terms “Resort Torts”, including cruise ship, maritime, and premises security, by representing individuals who have been seriously injured, or have lost loved ones due to the negligence of others. With a team of mature, highly-skilled associates and staff, Leighton Law has an innate understanding of what a family needs to get through and survive unimaginable tragedy.

“I always tell my clients that law is not a drive-thru business. There are things that the legal system can and cannot do,” said Leighton. “The justice system is here to provide compensation and financial security, for long-term care including physical rehabilitation, hospital care and even psychiatric care, should it be required. Unfortunately, we also know that there is no way for compensation to bring back a loved one or take away all of the pain of an injury.”

Securely situated in the Top 100 Super Lawyers, as well as the owner of a coveted spot as one of the Best Lawyers in America, Leighton is an oft-requested co-counsel for personal injury cases and has secured two record-breaking verdicts on behalf of his clients. In one of his long-running cases, Leighton represented a family in a labor and delivery medical malpractice case that resulted in their child being born with severe cerebral palsy. The child is not only unable to speak, but also has no use of her limbs and is fed through a tube. First tried administratively under Florida’s stringent malpractice law, the case went through three sets of appeals before a jury trial that resulted in the largest personal injury verdict in Seminole County: $24.5 million. The proceeds of the case were put into a structured trust to pay for ongoing care for this child, ensuring her lifetime financial security and the finest rehabilitation. In a second case, Leighton represented the family of an off-duty police officer who was shot and killed while withdrawing money from an ATM in Orlando. Tried and won in Orange County, Leighton secured an unprecedented $24.3 million for his surviving children.

While many of Leighton’s cases garner intense media attention, a recent case has also triggered proposed legislation currently under consideration by Florida’s Legislature. A victim’s advocate not only in the courtroom, but also as a founding member on the board of directors for the National Crime Victim Bar Association from whom he received the Advocate of Justice Award, Leighton does all in his power to protect the rights of victims and their families. This includes drafting and advocating for a bill that will bring regulation to the parasailing industry that is so prevalent along the Florida coasts. Termed the Amber May Law, this bill was drafted in response to a negligence lawsuit Leighton won against a parasailing operator and resort where 15-year-old Amber May White died from head trauma and internal injuries incurred after parasailing with her sister.

Leighton and his team also handle a substantial amount of legal malpractice cases. While attorneys strive to do what is in the best interest of their clients, some lawyers take on cases that are outside of their skill set to the detriment of the case. Whether a client is negligently referred to a colleague or an undereducated attorney takes a case himself, Leighton Law is ready to step in to help because the firm believes that attorneys have an obligation to stand behind the ethical principles of the legal profession and call to task those whose mistakes have harmed clients.

“There are literally hundreds of subtle nuances. Whether it involves venue, jurisdiction or investigative techniques, it is virtually impossible to truly understand this practice without being ensconced in it as a main practice area,” stated Leighton. “The practice of law as a whole has become so specialized that it is imperative to refer clients to the best subspecialists to help with their particular case.”

Because many of Leighton’s cases are high profile or have wide-reaching social implications, his presence is often requested for both local and national media outlets, including NBC’s “The Today Show”, CNN, and “Inside Edition”, commenting on legal issues and cases. He is a frequent lecturer at national legal programs and has spoken and taught at seminars, colleges and conventions in over a dozen states. In addition to lecturing nationally on security and violent crime issues, as evidenced with his yearly Spring seminar entitled “Sex, Drugs, and Violence: Negligent Premises Security Litigation” in conjunction with The Daily Business Review, and his Fall “ResortTorts™” seminar, Mr. Leighton has led training programs for crime victim advocates and has published extensively in the field.

A renaissance man of sorts, when he isn’t making headlines for his trial prowess, volunteering, supporting bills that protect victims’ rights or speaking at industry events, Leighton turns his hand to writing. A successful author of dozens of peerreviewed articles, he is also the author of “Litigating Premises Security Cases,” a two-volume book published by West. It is the most comprehensive text on investigating, preparing and trying inadequate security cases and representing crime victims. He currently sits as the chairman of The Academy of Trial Advocacy, a national invitation-only association of some of the country’s leading catastrophic injury attorneys. He is also on the executive committee of the National College of Advocacy Board of Trustees, which develops and implements the curriculum and programming for the 45,000 member trial lawyers who comprise the American Association for Justice.

Out Of The Office

Leighton travels between two offices, one in Miami and the other in Orlando. The fast pace of his practice is kept in check by fatherhood. On a personal level, Leighton sat on the board of directors for Temple Beth Am for the past seven years and currently serves as a board member of the National Crime Victim Bar Association. He enjoys race car driving, skiing, wine collecting, biking and travel, and strives to spend as much time with his 15-year-old daughter as his schedule allows.