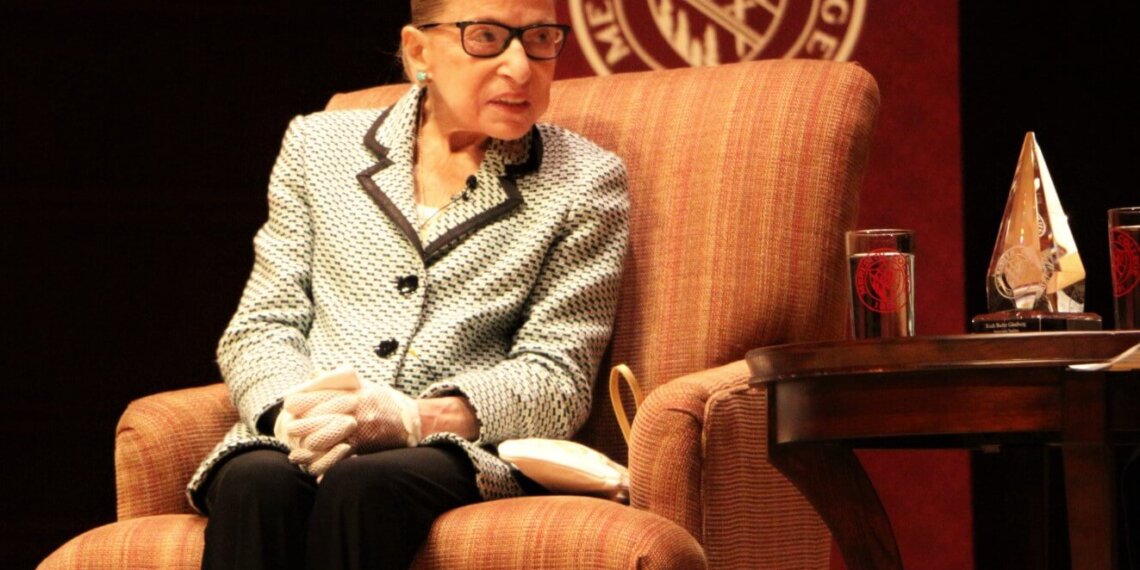 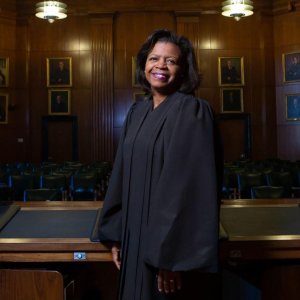 On a warm Monday evening in September, there were excited admirers of Justice Ruth Bader Ginsburg aka RBG, mostly women, standing in a line, wrapped down the sidewalks, waiting to be admitted to the Duke Energy Center for the Performing Arts in Raleigh. Many of the women were Meredith College alumnae, professors, supporters, lawyers and non-lawyers. All of us chatted about our anticipation for what we knew would be a wonderful presentation by Justice Ginsburg. Some of us had seen the documentary or the movie about Ginsburg’s life, many knew her as an advocate and prolific jurist, and all of us expressed a profound appreciation for Justice Ginsburg’s service as a trailblazer in the legal profession and Supreme Court. For that moment, we were bonded over the anticipation of being in the presence of Ginsburg’s greatness, ready to cling to her every word.

Just before the conversational presentation by Justice Ginsburg and former dean and professor of Wake Forest School of Law, Suzanne Reynolds, amidst enthusiastic mingling at the reception, I met Justice Ginsburg!

She and I reminisced about her visit some years ago at the North Carolina Bar Association Women in the Profession’s event in Asheville where all 13 of the then-sitting women chief justices from around the country were in attendance. I was thrilled to share with Justice Ginsburg that the tally has since grown to eighteen women chief justices nationwide.

She congratulated me on my own appointment as chief justice and wished me well. The grip of her handshake was firm and conveyed that we were sharing an important, though brief, moment. After our exchange, she greeted the many dozens of women eager to spend a moment with her. As I watched Justice Ginsburg greet her admirers, I felt deeply appreciative that she serves as a model for women in the judiciary and bar. She has lived her convictions in her family, her profession, and her service.

During her presentation, which alternated between lighthearted and moving, Justice Ginsburg discussed case law, her relationship with her colleagues and her husband Marty, who fully supported her and her family, her law school experiences, and the divisiveness of judicial appointments. Justice Ginsburg began her career at a time when opportunities for women were limited. When asked if her mother, who worked in a garment factory, could have imagined that her daughter would one day sit on the United States Supreme Court, Justice Ginsburg replied, “Not in her wildest dreams.” Reflecting on the difference between a factory worker and a Supreme Court Justice, Ginsburg reached a simple conclusion: it’s one generation.

As the Supreme Court of North Carolina commemorates its 200th anniversary this year, it seems appropriate to reflect on the changes of the court within a generation. It’s important to be mindful of the evolution of and advancements in the law and the times.

When I was admitted to the bar over a quarter century ago, there had been only two women justices to serve in North Carolina in the nearly 180-year history of the court—Susie Sharp, the first woman elected chief justice in the nation, and Rhoda Billings, who also served as chief justice—and only one African-American justice, Henry E. Frye, who later became chief justice. With 78 justices having served on the court, only 4 percent were either a woman or a minority, and no women of color had ever served on the court.

During the talk, Justice Ginsburg discussed the importance of a diverse court. She explained that a level of diversity that reflects the populace is vital to promote the public’s perception of the Court as fair and unbiased.

While that is true, the import is even greater. The judiciary should be diverse in all the ways the people we serve are diverse—age, race, sex, gender identification, sexual preference, religion, socioeconomic background, and geographic origin—because our differences shape our experiences, and our experiences shape our worldview. Justices are prone to share invaluable insight with their colleagues. The result is rigorous, informed debate—the intensity that transforms coal to diamond.

As I listened to Justice Ginsburg and reflected on the progress of North Carolina’s high court, it occurred to me that although a lot can change in a generation, there seemed to be no generational divide in the audience’s reception of Ginsburg’s message. The excitement was palpable among all the women in the auditorium.

It was remarkable to witness a sold-out crowd—mostly women—clinging excitedly to copies of Justice Ginsburg’s “My Own Words,” hoping for an autograph. It was heartening to see an 86-year-old jurist receive a deafening standing ovation as she entered an overflowing auditorium and embarked on a discussion of difficult and nuanced legal issues.

Near the end of her remarks, Justice Ginsburg observed that with the appointments of Justices Elena Kagan and Sonia Sotomayor to the Court, she felt that women’s place on the nation’s highest Court was solidified—that women on the Court are no longer a novelty, but the norm.

This year, I became the first African American woman and the 29th Chief Justice of the Supreme Court of North Carolina. When Justice Mark Davis was appointed to fill the vacancy left by my appointment, he became the state’s first Jewish justice.

As I have reflected on the evening’s remarks in relation to the court’s 200th year, it is important to consider the court’s future. As exciting as it is to be the first African American woman to serve as this state’s chief justice, it will be much more fulfilling when there are far fewer “firsts” to accomplish. When women are well represented in big law and in the judiciary at every level, when they are sitting first chair in complex litigation with regularity, and when the inclusion of all historically marginalized people is the norm, that will be a great day.

As Justice Ginsburg reflected on her journey, its challenges and successes, she created space for me to reflect on my own, on my strong and accomplished mother’s influence on my life, and on the supportive roles my devoted husband and twin sons have lived. I’m indeed grateful for my journey. Cheri Beasley

Cheri Beasley is the chief justice on the Supreme Court of North Carolina. She is a graduate of Rutgers University Douglass College and The University of Tennessee College of Law. For helpful comments and editorial assistance, she thanks her research assistant, Denaa Griffin, and Casey Peaden, J.D. Candidate 2017, Campbell University School of Law.