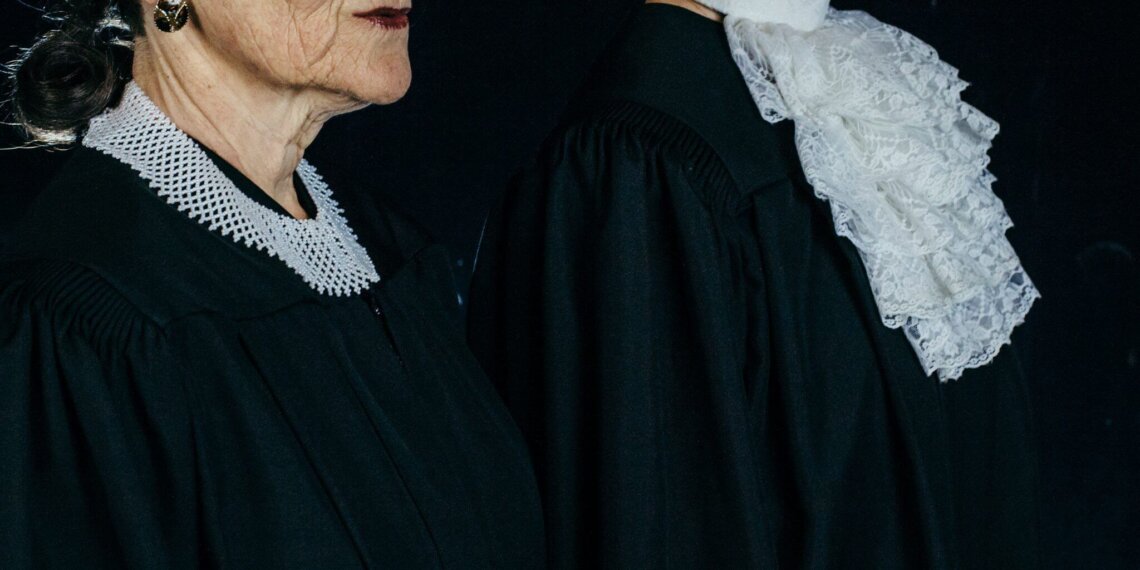 Attorney at Law Magazine Phoenix had the pleasure of sitting down with the women behind Sisters in Law – Director Dana Resnick and actresses Eileen T’Kaye (Ruth Bader Ginsburg) and Laura Wernette (Sandra Day O’Connor). The play opens today in the Phoenix Theatre Company and will run through April 28.

AALM: How would you describe the main theme of the play? What is something you hope the audience will walk away with?

DR: Two of the most powerful, intelligent women in the world, Sandra Day O’Connor and Ruth Bader Ginsburg, must contend with each other over issues that affect the entire country.  Because these two women, equally deserving of respect and admiration, practice their craft so differently, working together to achieve the greater good is a lifelong challenge.  In a man’s world, can these two strikingly different women, in strikingly similar life situations, join forces? Is the bond of womanhood enough to overcome political differences? Do women hold each other to a higher standard? These are some of the questions we ask in Sister’s In Law.

AALM: Who is the ideal audience for this production? Who do you think will get the most out of its message?

DR: Bring your daughter and your grandmother, bring your co-workers and your boss.  Get a glimpse into a world that is shrouded in mystery and decorum, but filled with humor and humanity.  The playwright, Jonathan Shapiro, has unlocked the chambers of the most powerful court in the world, and he has done so through the true-to-life experiences of our modern day heroes, Sandra and Ruth.

AALM: What is your favorite scene in the play?

DR: I am partial to the final scene… the final moments of the play, really.  But I can’t spoil the ending here!

AALM: What drove you to work on this project?

DR: I always ask the question: What does the world, our audience, want to see? Right now, we want to see two powerful women on the stage.  We want to leave the theatre feeling inspired and charged with energy. New play development is a passion of mine, when I meet a writer who has a vision the way Jonathan does, I am eager to join forces.

AALM: What are some of the challenges you’ve faced in putting this production together?

DR: There is so much history to navigate through for both the women and the Supreme Court, we want to keep the play honest, while pursuing the art of storytelling and theatrical magic.

AALM: Tell us a funny story from behind the scenes.

DR: After our first workshop of the play at Loyola Marymount University, the invited audience was completely divided about who is “favored” in the play, Ruth vs. Sandra.  I enjoyed the debate then, and I am happy to report the debate continues. Even after working on the play for over a year, I am still changing my mind about who ends up on top.

Right now, we want to see two powerful women on the stage.  We want to leave the theatre feeling inspired and charged with energy.

AALM: What has struck you most about the lives of these two women as you’ve worked on the play?

ET: How much I didn’t know about them.  They each have such an extraordinary history.  By reading more in depth about their lives and experiences, I began to understand what fueled their passions and why they made certain decisions at certain times.  It has been extremely eye opening.

LW: The fact that they were and are so strong in the face of so many challenges. That and the grace with which they conducted themselves, the professionalism, the sheer intellect they exhibited, the seriousness with which they took (and take) themselves and their place on the court. And then to also be such supportive wives and mothers. When you think about the ridicule and chauvinism they had to deal with their whole lives, the word pioneer seems to only scratch the surface of what they achieved.

With respect to Sandra, there is simply too much. Her love for her family, her personal relationships with her clerks. Cooking for her friends, family and clerks. Her idea to bring the Justices together to commune after oral arguments. Her determination. Her near-photographic memory. It’s humbling. Yet, she is still a mystery.

The fact that they were and are so strong in the face of so many challenges. That and the grace with which they conducted themselves, the professionalism, the sheer intellect they exhibited, the seriousness with which they took (and take) themselves and their place on the court.

AALM: What’s your favorite scene to act out? What’s the hardest?

ET: So far, working on the Hospital scene where Ruth is on pain medication is one of my favorites: imagining what Ruth is like “under the influence.”  The hardest thing is the idea that I am playing the Notorious RBG!!!  A rock star who people adore!  I feel a huge responsibility to do her justice (pun intended)!

AALM: How does this project compare to others you’ve worked on?

ET: I’ve been lucky to work on a lot of new plays in my career. They can be especially challenging however.  It is a very special creative process when you have a collaborative relationship with the playwright and director, such as we have with Jonathan & Dana.  So I feel fortunate on this one.

LW: This project is different from most I’ve done because it’s about famous people whose lives are still unfolding. I mean, it’s daunting to portray a living icon like Sandra Day O’Connor, but it’s also exciting because her influence on the court still feels so fresh. It makes this a great opportunity to help people understand what an amazing woman this is.

AALM: What compelled you to audition for this role? Did you get the part you originally auditioned for?

ET: I auditioned for Ruth from the beginning. I am definitely a Ruth-type and not a Sandra-type. And for me, the opportunity to play Ruth Bader Ginsburg is one of those “roles of a lifetime.”

AALM: Tell us a funny story from behind the scenes.

ET: A few weeks before I heard about the play or that I had an audition for it, my sister-in-law told me that she was going to rent a house in Arizona for the month of April.   She had some dear friends who had recently moved from Oregon to Arizona and wanted to spend some time with them.  Then I get the audition for the show that plays in Arizona in April.  Then I get the part.  How weird is it that?  I still giggle about it.

LW: Not quite ready but overwhelmingly excited, and more than a little bit intimidated to be depicting such an amazing trailblazer in Arizona where many people know her so well.

ET: I’m still getting ready!!! And I am unbelievably excited to be a part of giving birth to this new play!

And for me, the opportunity to play Ruth Bader Ginsburg is one of those ‘roles of a lifetime.’