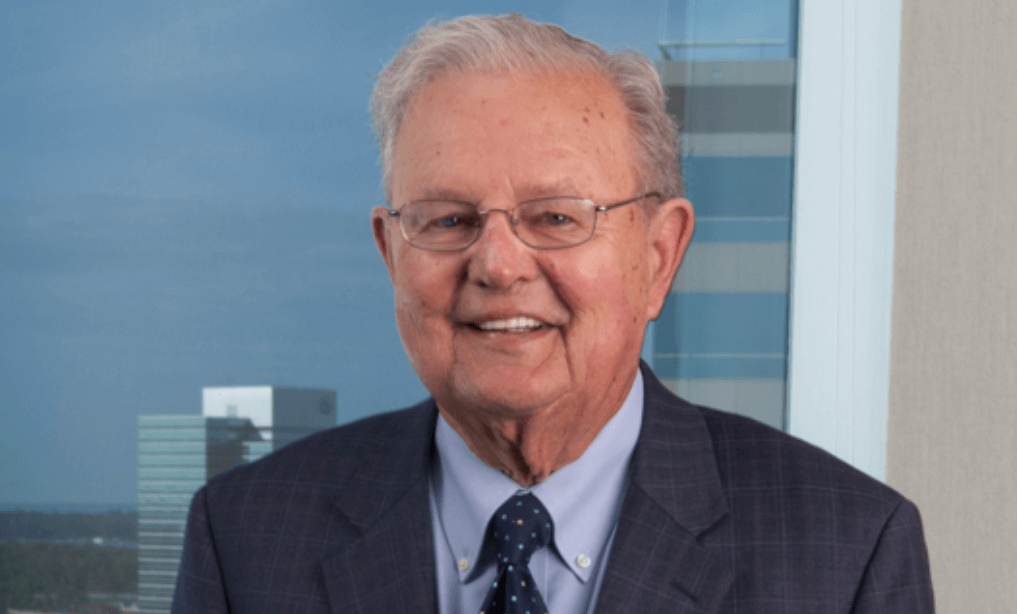 Perhaps very few lawyers, if any, in Florida have tried well over 1,000 civil jury trials. Carl Dawson has accomplished that feat during a career spanning more than 65 years. Dawson was born in Jacksonville and lived on a farm in what is now Queen’s Harbor. In 1951, he graduated from the University of Florida Law School with an L.L.B. He graduated second in his class and instantly became a lawyer as there was no such thing as a bar exam. His dear friend, Harris Dittmar, graduated first in the class. They both came to Jacksonville and began trying cases. Dittmar joined the Bedell firm and Dawson joined the Howell & Kirby firm. They were two of the highest paid first-year lawyers in Florida, earning a few hundred dollars a month.

In 1953, Dawson formed the firm that would change names numerous times over several decades in Jacksonville. One year later, the Florida Supreme Court adopted the Florida Rules of Civil Procedure. Dawson tried cases in Jacksonville’s courthouse, which was built in 1902 aft er the Great Fire of 1901. That court house did not have air conditioning, and on particularly hot days, judges sometimes allowed the lawyers to remove their jackets. In 1958, he watched the “new” Duval County Courthouse rise on Bay Street. There Dawson would try scores of cases and mentor hundreds of lawyers.

In 1967, the University of Florida mailed Dawson a document, which he decided to throw away as he was busy with his practice and thought it might be an advertisement. His legal assistant at the time picked the document up out of the trash and framed it. Later the document was identified to be a Juris Doctorate degree. The L.L.B. degree was being replaced.

His practice continued as he watched the advent of typewriters, and in 1983, his firm purchased its first computer. At that same time, Dawson’s longtime paralegal, Susan Bennett joined the firm. Three years later, the firm purchased its first fax machine. Through all the changes in technology and the rapid expansion of his firm, Dawson’s first love remained being in the courtroom and talking to a jury.

Throughout the years, he would try cases with numerous lawyers. One close friend in the profession was Noah Jenerette, who came to Jacksonville the same year that Dawson and Harris Dittmar arrived. Dawson and Jenerette would be retained on cases and try them within weeks, if not days, of receiving the files. There was no discovery. They each found out what the other side had at trial. Dawson and Jenerette had a gentleman’s agreement that neither of them would object to the other’s arguments or questions during trial. On one occasion, Dawson thought Jenerette was going too far. Dawson objected and Jenerette immediately reminded Dawson that “we don’t object.” Dawson agreed and told Jenerette to carry on.

Over the years, the manner in which cases were tried continued to change, but Dawson never did. He was always polite and always prepared to provide the perfect response to any surprise argument or evidence. No matter the trial, plaintiff or defense, Dawson tried the case as a zealous advocate who cared about his colleagues in the profession. In fact, during his early years of practice Jacksonville was home to less than 300 lawyers (now there are more than 3,000). Dawson knew most of the lawyers by name and could recite their telephone numbers.

Every lawyer’s word was his or her bond and, as Dawson says, “you could take it to the bank.” Dawson’s law partners always understood Dawson’s dedication to that principle and the rule of law.

A friend of his, John DeVault, remarked that Dawson is “known by all to be an ‘old school’ trial lawyer who upholds the highest standards of ethics and professionalism.”

In a 1990 JBA Bulletin article, Dawson’s colleague, Harold “Hal” Catlin, told the story of how Dawson candidly disclosed an adverse appellate decision to him moments before a summary judgment hearing. The appellate decision, which Catlin had not found in his research, ultimately led the court to rule against Dawson’s client.

In 2009, Dawson became a mentor to Michael Orr who was leaving a large firm to start his own practice. Within a year, Orr and Dawson were partners.

“I consider myself the luckiest lawyer in Jacksonville,” says Orr. “Having the opportunity to learn from one of the best trial lawyers in Florida is humbling, particularly when you experience how brilliant he is in the courtroom.”

And while he remains brilliant in the courtroom, Dawson remains equally brilliant on the golf course. Some might wonder why he is often called “Great One” by so many, including his friends and acquaintances on the golf course. A few people might guess it relates to the strength of his golf game (he recently hit the second hole-in-one in his life), while others may say it pertains to the number of years he has held the number three locker in the clubhouse. However, those who truly know him will tell you the answer without hesitation: Carl Dawson is called “Great One,” because he is genuine and kind to anyone and everyone he meets and because he treats everyone else like they wish to be treated, like a “Great One.”

During the past eight years, Dawson has continued to try cases before juries with abundant success. That success stems from his diligence, professionalism and unwavering civility.

Howard Coker noted, “Carl is the perfect combination of civility and advocacy. Always a gentleman and always a true professional.”

Hank Coxe was also asked about his thoughts on Carl Dawson: “One of the few persons I have known who could instantly make you feel at ease and comfortable in a tense situation. If you saw him, you went straight for him hoping he had time for you.”

As Dawson sits in his office in the Bank of America Tower today, he can look out over downtown Jacksonville and point out the various offices he and his firm occupied over the past six decades. Though as busy as ever, Dawson is always happy to take a moment and impart stories about the early years of his practice, when, as Dawson puts it, a trial attorney needed to know how to dance. There is a serenity that follows Dawson around these days, the stamp of a southern gentleman and of a life well-lived. But even today, when trial is looming, there is an unmistakable fire in Dawson’s eyes that marks the true passion in the life of this renowned trial lawyer.