Derrick Mills: Big Changes One Small Step At A Time 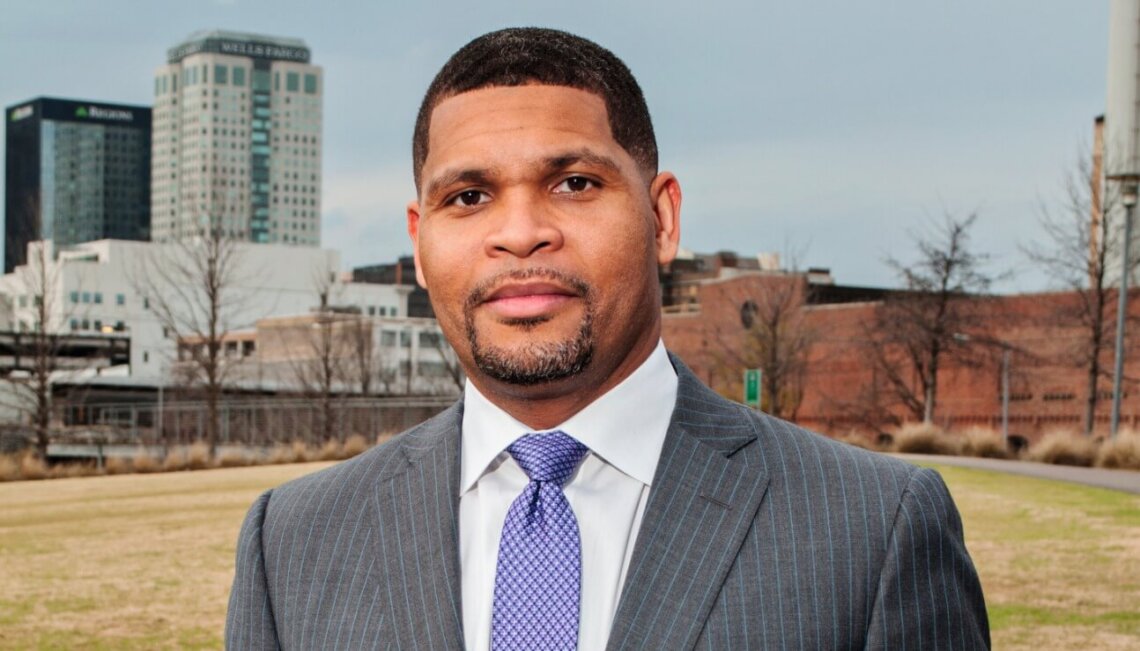 Recognized as a dynamic, charismatic and efficacious attorney, Derrick A. Mills dominates the courtroom and embraces clients with sincere empathy. It would appear this Marsh, Rickard & Bryan P.C. partner has it all – success, respect of his peers and a picture-perfect family. But life didn’t begin on such a high note.

“I grew up in a very, very small town in Alabama,” he says. “Everything you’ve heard about Alabama is true; it’s changing, but unfortunately at the time when I was growing up it felt like I had two strikes against me. I was black, and I was dirt poor being raised by a single mom. So, the world view was pretty bleak.

“However,” he continues, his face noticeably brightening, “I’m very fortunate because I’ve always had fantastic mentors, starting with my mom. Basically, she taught me that hard work will get you where you want to go. She also instilled in me the importance of trust; earning the trust of those you work for and have relationships with. My mom is an angel from God. She raised five of us and worked three jobs just to keep food on the table and a roof over our heads.”

Mills goes on to name other significant influences in his life including his high school principal; Robert Potts, president of his alma mater, the University of North Alabama; Federal Judge U.W. Clemon; and the late Senator Howell Heflin.

“Each one added another layer to the foundation my mother laid,” Mills says. “They expanded her philosophy to include education, doing the right thing and giving back. Most importantly, they truly cared. Each was like a father to me.

“So, what do you think that does to this young, dumb black kid from rural Alabama? Number one, it radically changed my world view. People are there to help you. I mean race matters, but if you stand out, do a good job and work hard people can see past race. And the other thing, it made me want to make a difference. I want to help others like I’ve been helped. It’s like a ripple effect, if we just keep passing it along.”

One Small Change at a Time

There’s no question he has been successful in all these respects. Even the most cursory assessment of his 15-year career makes it obvious that Mills’ hard work, acumen and compassion, have all been contributing factors. However, in his somewhat unique circumstances, his eminence can also be attributed to his healthy and affirmative attitude.

“I try to just see people,” Mills explains. “Not race, not economic status, just people. I know that even though things are changing, they are changing slowly. I can still evoke negative or surprised responses when clients meet me for the first time and discover I’m black. I refuse to dwell on that though. I just work that much harder to earn their trust and prove that regardless of my color or background I am a good lawyer and I will do my best for them.”

It’s nothing new. Mills has been dealing with situations like this all his life. If he thought a law degree and a solid position with a prominent law firm was going to change that, he quickly learned the truth. As a young lawyer, new to the firm of Marsh, Rickard & Bryan, his first big case was given to him by David Marsh, the senior partner and founder of the firm.

“My firm is just fantastic,” begins Mills. “In fact, another wonderful mentor is my senior partner David Marsh. I’m a young black guy, but stereotypes don’t hold true for people at my firm, and he assigned me this case. So I go to Haleyville, Alabama, a small community where there aren’t too many people who look like me.

“I show up on the doorstep of this woman who had lost her husband in a nursing home incident, a very sad situation,” he continues. “I knock on the door and when it opens, I’m facing this woman and her two sons, who are looking at me like … well, I wish you could have been there to see their expressions. It was even more comical (although, not at the time) once I introduced myself as their lawyer.”

After much explaining, the three finally sat down to discuss the case. It was quite obvious to Mills, at the time, that these people did not trust him at all. They were wary and clearly doubtful. This became increasingly apparent.

“She showed up for every single deposition and every hearing,” says Mills. “At least at first, it was obvious that she really didn’t believe that I knew what I was doing. But, halfway through things began to shift. She’d been watching me fight for her, working hard and she realized that I truly cared about her and her loved ones. So, halfway through something magical happened, she began to trust me.

“I realized that she had probably never really been around a lot of black people in her life,” he continues, “so I understood her skepticism. We tried that case before an all-white jury. And, after the jury came back with a $2.5 million verdict, she cried as hard as she’s probably ever cried. Then, she gave me the biggest hug and said, ‘Thank you for everything!’

“Ever since then, we have been great friends,” he concludes with a smile. “We’re Facebook friends, she sends my kids birthday wishes and checks on them, and I know what’s going on with her grand-kids.

“I guess the big takeaway from this story, this experience, is that, yes, I do my job as an attorney. But, I’d like to think that I’m doing a little bit, to change people’s minds and in some small way, change this country.”

Mills takes all this to heart. Although he gives his all to each and every client, is an excellent father, loving husband and good friend, there is a special part of him that feels compelled and honored to carry on the torch that his forefathers lit and championed in their lifetimes. He doesn’t take lightly or for granted, all the sacrifices that those who’ve gone before him made so that he could be a poor black boy who grew up to realize his dream and provide a better life for his family. Just as important is the duty he feels to continue the crusade, reaching out to others and giving them a hand-up, just as he has been given.

Mentoring young people is something Mills thoroughly enjoys. In fact, he says one day he would like to teach. A motto he has adopted for his life is one that he heard from Judge Clemon, though the originator is unknown:

“You learn, then you earn and then you return.” Which is precisely what he’s now doing.

Married to his high school sweetheart, Tamesha (though she’s known as Mesha), they have two children – their daughter, Hannah, 13, and their son, Cance, 9. They enjoy spending lots of quality family time attending Hannah’s dance recitals and Cance’s sporting events; sitting around the house playing board games or watching movies; and when they get the chance, traveling.

“I’m very, very blessed,” says Mills. “I love and am proud of the work I do, I work for a wonderful firm with great people, have a beautiful family and God has put so many incredible people in my life. I just couldn’t ask for more.”