In the fall of 2019, Cranfill Sumner LLP white collar attorney Patrick M. Mincey got a call from a man who was scared. His name was Mark Coffey, he worked in finance, and he needed a lawyer for a case with international repercussions. Mincey was all ears. “Mark’s case is a microcosm of what I have been working toward my whole career. Terror networks, the scourge of socialist kleptocracy, and the dark underbelly of illicit global finance,” recalled Mincey.

I want to be involved in the biggest, wildest, most difficult, and most complex litigation cases.

The always dapper 41-year-old Mincey looks like a man well-suited for the world of international intrigue. Perfectly groomed in expensive suits with pocket squares that match his tie, he could have popped out of the pages of a John le Carré spy novel.

Mincey was born in Charlottesville, Virginia, and traversed the world with his family for his father’s career teaching surgical techniques. He spent weeks during high school in Hangzhou, China, where his father operated on a high-ranking military officer “with dozens of Communist political minders and medical officials crammed into an antiquated operating room, breathing down on him as he performed,” said Mincey.

In 2005, he and his brother were studying in Europe. Mincey was enrolled at the London School of Economics, and they were riding separate trains when a series of terrorist bombs tore through the London Tube in the 7/7 attacks.

“We both escaped injury, but we got a ringside view of what Islamic terrorism has to offer the world,” he said.

“At LSE, I was learning about international crime syndicates, Sharia-compliant finance, and how rogue regimes, international mafia, and terror networks fund operations using legitimate markets. I was mesmerized by this dark underbelly of the global financial system, the inner workings of above and below-ground commerce,” said Mincey.

He earned his Juris Doctor from Mercer Law School and became a fixture in courtrooms where he watched and learned.

“I will never be persuaded there is a higher calling in the law than criminal litigation,” he said.

“I’ve endeavored to make international criminal finance and geopolitics a pillar of my legal career. I want to be involved in the biggest, wildest, most difficult, and most complex litigation cases.”

“There has been an explosion of global financial crimes that can be committed from a laptop in your bedroom. International business has taken root in North Carolina,” said Mincey. “My goal has been to develop an elite, sophisticated team of white collar criminal and crisis litigators who compete with the best international firms of New York, D.C., and London to service clients domestically and abroad in the highest profile, messiest disputes, while being nimbly headquartered from my home state. 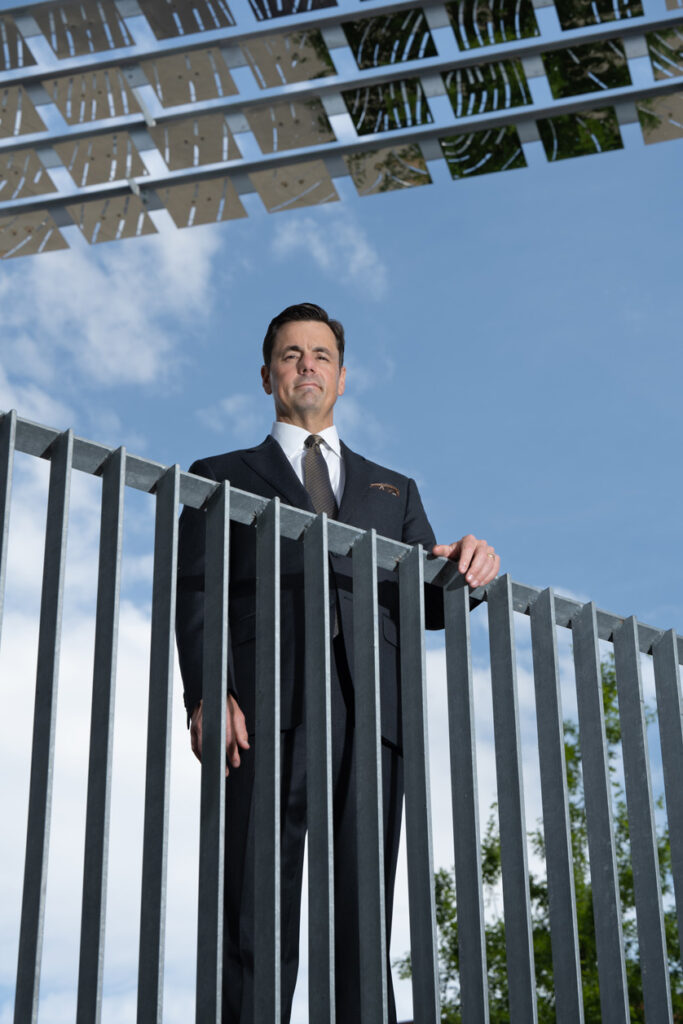 My clients often risk not just prison, but tens of millions, even billions of dollars in exposure, businesses with innocent employees who are potential collateral damage.

Hickory, North Carolina born Mark Coffey was a compliance officer with Avenir Private Advisors and had worked as an advisor for its predecessor firm. The two companies provided financial investment advice to clients.

Coffey was fired in 2019 by Avenir after asking too many questions about transactions by U.S. offices of Morgan Stanley and Interactive Brokers LLC, Avenir and its predecessor firm which he believed involved money laundering.

The money trail that Coffey exposed started in Venezuela. That country’s oil minister is alleged to have taken $2 billion from the nation’s oil company, PDVSA, through fraudulent insurance contracts, according to The Wall Street Journal.

With the help of a Venezuelan businessman, $100 million of that money was reportedly laundered through an account at Interactive

Brokers, and prior to that, additional money was also laundered through Morgan Stanley. The money was layered through multiple bank accounts for shell companies designed to confuse and throw anyone looking for the money, such as government regulators, off the trail.

The money then came to be managed by Avenir’s predecessor firm where Coffey was employed. When that firm rebranded as Avenir, Coffey became chief compliance officer and soon discovered suspicious transactions for its largest client.

The transactions raised a red flag with Coffey. He urged the owner of Avenir to report the suspicious accounts. When he refused, Coffey contacted the SEC, ultimately providing financial statements, corporate records, emails, texts, and other evidence that he said show violations of federal securities laws.

Then he called Patrick Mincey.

“We wanted to ensure that Mark is represented and protected going forward as he exposes this conduct,” said Mincey. “He wanted to stop his employer’s bad conduct and make sure that he was protecting himself as an unwitting front to a massive money laundering scheme.”

Coffey has not been implicated in any of the misdeeds and continues to actively cooperate with federal law enforcement, according to Mincey.

Billions of dollars have been stolen from Venezuela by President Nicolás Maduro and his predecessor, Hugo Rafael Chávez.

The Wall Street Journal reports that U.S. Treasury officials believe Russian oligarchs and elites might be using U.S. investment advisors as a low-risk way to evade U.S. sanctions because of the industry’s vulnerability to illicit finance, according to a Treasury Department’s National Money Laundering Risk Assessment. The report was released after the Russian military invasion of Ukraine.

“We have established evidence of ties between the actors in our case and Russia. Specifically, we have evidence that the co-conspirators and corporate entities involved in this fraud announced opening an office in Moscow less than one month before the Ukrainian invasion,” said Mincey. “The money was stolen from the Venezuelan people who are literally relegated to eating out of dumpsters, and American securities firms aided and profited from it.

“Mark followed proper protocols by conducting a thorough internal investigation for several months before calling the SEC,” Mincey continued. “He was deeply concerned Avenir was engaged in unlawful conduct which he wanted to stop immediately.”

Mincey and Brewster are monitoring the case and similar cases in the event of any blowback from his former employers. Coffey has already faced retaliation for speaking out.

The money was stolen from the Venezuelan people who are literally relegated to eating out of dumpsters, and American securities firms aided and profited from it.

“We routinely monitor parallel criminal and civil proceedings, primarily in the United States, Europe and elsewhere, against the kleptocrats involved, and individuals and organizations in the international finance community we know or suspect to be working with them,” Mincey said.

“We monitor extensively geopolitical events as they relate to this broader conspiracy and its endless nodes and extended networks,” he added. “Particularly, we focus on the interrelationships between Venezuela, Russia, Iran, Turkey, and China and the black, gray, and regular markets they use to collaborate against U.S. national security interests.

The United States has a pervasive, systematic money laundering crisis...

Coffey contacted the SEC through its whistleblower program which has discretion to award between ten and thirty percent of the money collected in an enforcement action to the person who provided the lead. However, the program has only paid out on .05% of the referrals the SEC has received. It’s uncertain if Mincey and Brewster will ever see a dime from their countless hours representing Coffey.

Mincey explained he is representing Coffey because “Mark’s case opens a window into the use of our securities system by kleptocratic regimes for their gain, with the ready assistance of American profiteers. In our country, we have this collective notion that money laundering is an offshore problem happening on some remote Caribbean Island. Mark has exposed how these kleptocrats are, unmolested and at an industrial scale, funneling stolen money through the United States.”

The SEC and the Department of Justice are investigating the evidence provided by Coffey, according to The Wall Street Journal and the Miami Herald. Mincey said the government is tight lipped on what, if any action it may take.

Mincey says one of the byproducts of the case is the experience Cranfill Sumner is gaining for handling similar cases in the future, representing whistleblowers, defendants, or firms unknowingly caught up in illicit activity.

“We have gotten very good at evaluating sprawling amounts of data and, with kleptocracy cases specifically, the relevant geopolitical context. Before accepting a case to file a complaint with an agency like the SEC Office of the Whistleblower, it takes months of investigation and research,” said Mincey.

“The most important attribute I have developed in my practice that has served me well, in this case, is to be patient and have no fear about the unknown. And to have an extremely high tolerance for risk,” he said.

“The United States has a pervasive, systematic money laundering crisis that directly undermines national security and the integrity of our securities markets where we want investors to have confidence in conducting their business. We need the United States to be the safest, most reliable place to invest on earth.”