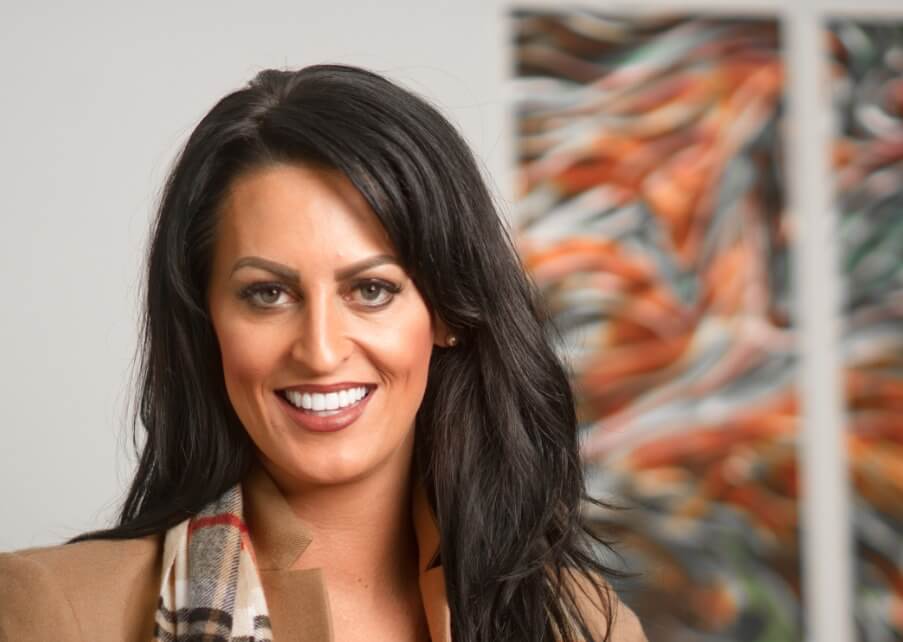 Life isn’t black and white, as attorney Skye Lazaro can attest, nor are the specifics of a criminal trial. Frequently linked in the media with young athletes who have found themselves on the wrong side of the law or clients facing even more ominous charges, Lazaro remains confident in our judicial system, and assiduously strives to afford her clients the best representation possible to ensure they receive the full benefit of our judicial system.

Lazaro’s childhood was both literally and figuratively miles away from the hailstorms she oft en finds herself in today. Growing up with her brother and sister on their parent’s horse and cattle ranch in Montana, Lazaro enjoyed the physical work and immense joy of that life.

“We did all the work,” she says. “I chose quarter horses, and that was my focus and passion my whole life actually.”

With cultivated parents who put a premium on education, not going to college was never an option for Lazaro or her siblings.

“I attended the University of Montana,” she says, “I had a professor who introduced me to a judge who was running for the Montana Supreme Court, and I worked on his campaign. Between the two of them, they put the bug in my ear to go to law school.”

But even back then, Lazaro’s life was not without challenges. In her sophomore year of college, she had a baby boy, and continued her education, as she says, “pretty much as a single parent.”

“You just do it,” she says easily. “It’s not something I really thought about. I just knew I wanted to be the best parent I could be and, at least to me, that included completing my education so that I could both provide for him as well as set a good example.”

Attending school by day, managing a bar at night, and being a full-time mom, Lazaro sardonically adds, “And, occasionally I got some sleep.”

“Today, my son and I are very close, and he has a very strong work ethic and a healthy respect for women, so I think it all worked out pretty well.”

Graduating early from law school in December 2008, Lazaro had passed the bar by February of the following year. Almost immediately, she was approached by a fellow attorney in the process of leaving a large firm to strike out on his own, and invited Lazaro to partner with him.

“I was working on my MBA when I started law school, I had always envisioned myself working in corporate law,” she says. “But then working with Paul, whose focus was personal injury and criminal defense, I discovered I just loved being in a courtroom. I love trial work, the judges, the prosecutors, everything about the experience. It just fits my personality.”

It wasn’t long before she was ready to launch Lazaro Law Group, and the rest, as they say, is history.

“I love Salt Lake,” she says. “People have been really good to me and there have been so many wonderful opportunities here.”

A popular guest speaker and presenter, Lazaro shares her insights, experience and inspiration with a variety of audiences, including students of the law school, the Utah Bar young lawyer’s division, and as an enthusiastic participant in the “shadowing” program and career fairs of the Canyons School District.

“These are all extremely important to me,” says Lazaro. “I feel a very strong calling to give back to both the legal profession and the community by trying to inspire and encourage kids and young adults to follow their dreams and not be afraid to work hard to achieve them.”

Lazaro’s self-described, “big personality” serves her well both in the courtroom and as invisible armor against the aspersions criminal defenders frequently endure. “I don’t let negative comments bother me,” she says. “Actually, I try to make it a point not to read most of what’s out there. I’ve received some pretty cruel and vicious Tweets and emails just for doing my job.

“People frequently ask me, ’How can you represent that criminal?’ It’s probably the thing I get questioned about most often,” she adds. “I just turn the question around and ask, ’What would you want if you were charged with a crime?’”

Assuming guilt just because a person has been arrested or charged is a common human frailty. But, Lazaro focuses on the rewarding aspects of her work. Helping people is her forte, especially those caught in a maze of legalese, facing the possibility of a frightening outcome and trying to decipher a system that is completely foreign.

“When people find themselves in the system, they don’t understand how it works or even what their rights are,” Lazaro explains. “They need someone they can trust, someone who is knowledgeable and can fight for them, and help them understand they have one very positive thing going for them, the best judicial system in the world.”