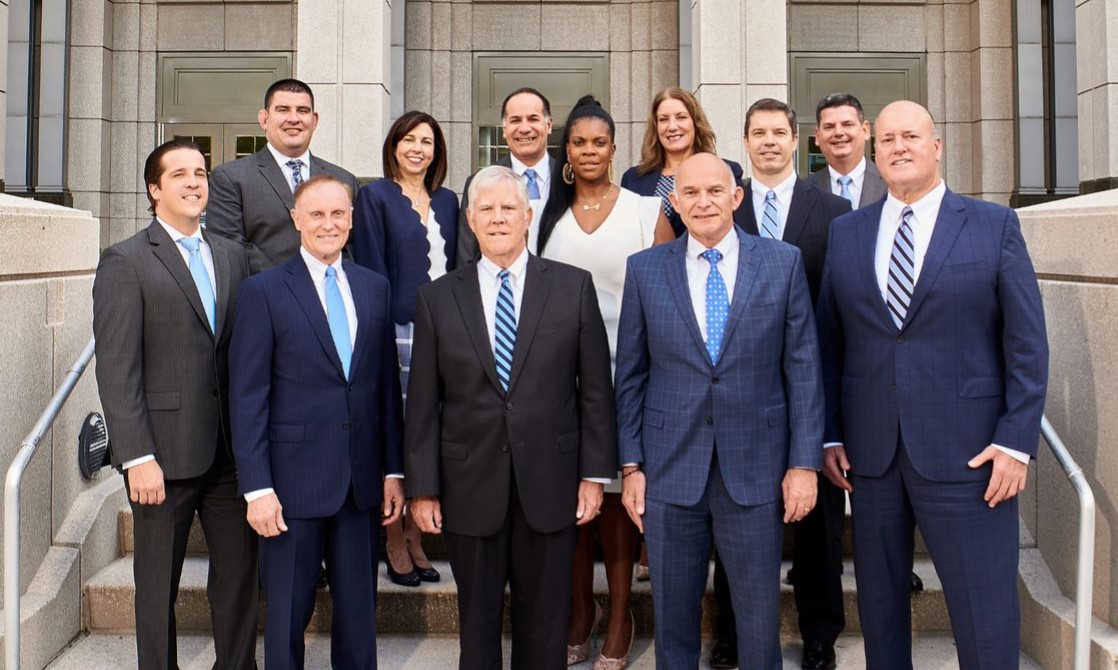 When three industrious Orlando attorneys linked their initials to form DSK Law, it wasn’t just the start of a firm, it was the realization of a shared vision for superior representation and dedication to the community.

Attorneys Hugo de Beaubien, David Simmons and Kevin Knight along with Tom Neal and Dan Mantzaris came together with unique backgrounds and a variety of practices to set the stage for what would become one of Florida’s largest and most diversified legal powerhouses.

Hugo de Beaubien, a graduate of Stetson Law School was serving as an assistant state attorney in 1976 when an unexpected opening set a new path for his future.

“I was presented with the opportunity to take over a small law practice in Orlando,” he says. “The attorney had been appointed a judge. I was trying criminal cases, and fortunately for me he had several criminal cases, so it was a very natural fit.”

Four years later, he was joined by David Simmons and Kevin Knight. Soon thereafter, they were joined by Tom Neal and Dan Mantzaris.

“Together, with our entire, dedicated team, we have built the firm you see today,” says de Beaubien.

Hugo de Beaubien, a graduate of Stetson Law School, is celebrated not only for his impressive law career but his inexhaustible contributions to the community.

“I feel much of my success has come from being willing, able and enjoying doing civic activities. I sincerely enjoy being a vital contributor to helping people in our community.

“There’s probably more money if you don’t invest time in such things,” he adds with a small chuckle, “but these things are important to me and quite frankly, I’ve met some of the best people by participating.”

He has been active in the Orange County Bar Association serving as chairman of the Criminal Law Section and Legal Forums Committee as well as serving as director of the Citizen Dispute Settlement Program and as a mediator. He has served on the board of directors for various organizations including Seminole Boosters, two charter schools, and the Florida Citrus Sports Bowl. He was the national chair of the FSU Alumni Association and a director of the Kiwanis club.

In 2019, he was recognized by Stetson Law School as the Volunteer of the Year.

Life might have been much different for this founding partner had he continued with his studies in physics. Early in his collegiate career, however, he discovered a kinship with one of our country’s most beloved historical figures.

“In my first year at Tennessee Tech, I became intrigued with the life of Abraham Lincoln. Despite my interest in physics, from that point on, I knew I wanted to study law,” he says. “If you look around my office it is pretty evident I have great admiration for the man and everything he stood for, especially his views on equality and treating others with respect. His inspiration helped me decide to go into law and it’s a decision I’ve never regretted.”

Kevin Knight served as executive editor of the law review while attending law school at Stetson University. A Dana Scholar, he was also the recipient of the Walter Mann Graduation Award.

Florida Bar certified in civil trial and also board certified by the National Board of Trial Advocacy, Knight continues to be a driving force and an integral part of the explosive growth of the firm.

As any business owner knows, you’re only as strong as the people who support you. Hiring only the best and the brightest, DSK Law has managed to staff their firm with talented and conscientious professionals.

Partner Dan Mantzaris, who concentrates his practice in the areas of local government, land use and zoning, and general business, describes the staff of DSK Law as “exceptional, focused and highly dedicated.”

“Our firm has developed the practice of law as a service,” he says. “Most people don’t think of the law as a service industry. When I first got out of law school, I was one of them.”

Growing up, most of Mantzaris’ family was in the restaurant industry. “I spent my youth working in that high-pressure customer service business. However, I didn’t initially translate that same concept into the practice of law. Over the years, our firm has put more and more emphasis on that concept. One thing I personally like to impart to our lawyers is very often it’s not what you say but how you say it.”

Since joining the firm in 1987, Tom Neal, has focused his practice on litigation, with an emphasis on construction, personal injury, and insurance defense matters.

Neal is a native Floridian, born and raised in Orlando. He graduated from the University of Michigan and was a four-year member of the football team, under legendary Coach Bo Schembechler. His experience at Michigan instilled in him the importance of hard work, dedication and teamwork which has influenced how he approaches the practice of law.

“The key to successful litigation is preparation, strategy and out-working your opponent,” he says. “It requires a multifaceted, team approach to protect the client’s legal interests. The DSK law team is unsurpassed in our commitment to working hard and collaboratively for our clients.”

Beyond hiring the most talented and dedicated professionals, DSK Law has proven repeatedly to be a firm that welcomes diversity and inclusion. The firm’s first female partner, Julie O’Kane, went on to become a circuit court judge. Yvette Rodriguez Brown became the first Hispanic partner and second female to rise to that position. In 2003, she was recognized by the Women’s Executive Council as Central Florida’s Woman of the Year. A few years later, the third female to make partner was Lindsay N. Greene who is of African American descent. Partner, Deborah I. Mitchell was just last year recognized as one of Orlando Business Journal’s Veterans of Influence. Today, three of the 14 partners are female.

Today, DSK Law celebrates 45 years of delivering a broad range of services – more than a dozen different practice areas – to its growing roster of clients. With offices in Orlando, Tampa, Tallahassee and Melbourne and a roster of more than 117 dedicated professionals including over 55 attorneys, it’s no wonder the firm was selected as the exclusive provider of LegalShield in North Florida in 1996.

“I think our association with LegalShield is indicative of the future of the practice of law,” says Mantzaris. “The law is shifting to a different model to address the needs of cost-conscious consumers who want great services and better communication at a much more reasonable price.”

As the North Florida Provider Attorney for LegalShield, DSK Law has been able to provide affordable legal services to clients who might not otherwise hire an attorney. It has also allowed the firm to grow and continue to succeed over the years.

As the professionals of DSK Law look to the future it’s with a confidence born of great leadership, loyal clients and a reputation for excellence that has been built brick by brick in the courtroom, face to face, and even over the internet. Having established a vast and ever-expanding network of offices throughout central and northern Florida, DSK Law stands on the threshold of an exciting and successful next 45 years.