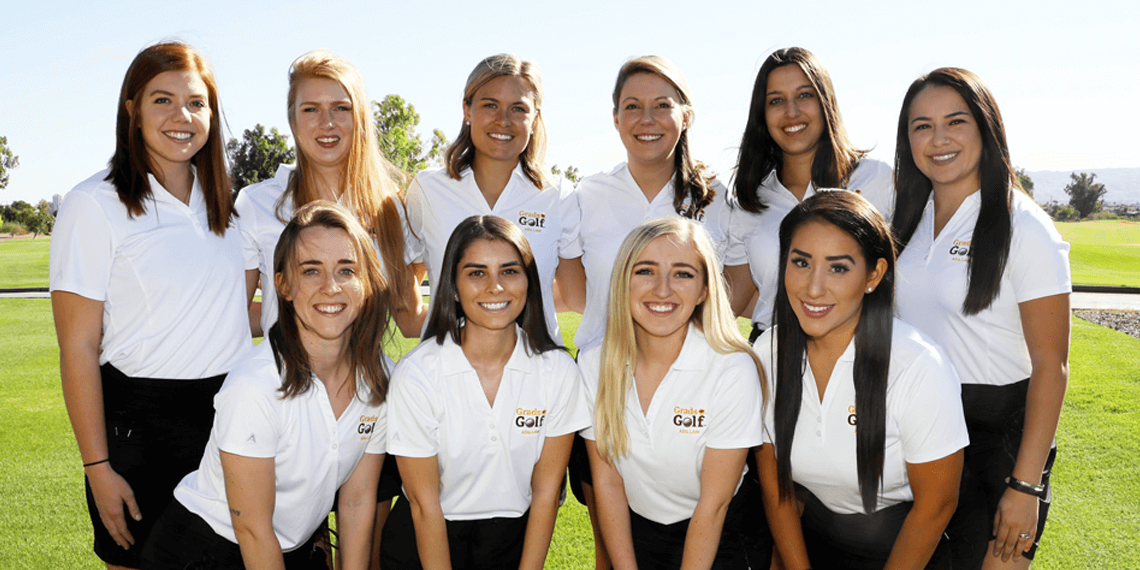 The transition from college to the business world is a challenge for any recent graduate. And women have long faced additional barriers, from the glass ceiling to the wage gap. One tool that might help? A golf club.

That’s the idea behind a new program at the Sandra Day O’Connor College of Law at Arizona State University. Designed for golf novices, the Grads to Golf program is rooted in the reality that some of the most important business is sometimes conducted not in the boardroom, but on the golf course.

“The program is designed to introduce graduate students at colleges and universities to the game of golf,” said Sara Perry, who coordinates Grads to Golf through ASU Law’s Master of Sports Law and Business (MSLB) program. “Most importantly, to introduce female master’s graduate students to the game of golf, the etiquette and the business side of golf, and also how to use golf as a business tool for their future careers.”

There were 13 students in the inaugural class, and they began their eight-week crash course in October.

MSLB student Anastasia Nelson was not only new to golf: She had never played any sport involving a ball.

“I grew up as a dancer, so this was just completely new to me,” she said. “It was very hard at first and I was just getting frustrated. I was able to hit the ball but not as far as some of the other girls.”

Helping them learn how to swing was Kerry Graham, an LPGA Hall of Fame instructor.

But before anybody could take a swing, they needed equipment.

“The first challenge is to ensure they have the right golf clubs,” said Graham, who had all the students first go through a fitting. “Therefore we know they’re going to have a chance, because golf clubs need to be just the right length and weight.”

That can be an expensive barrier, especially for novice golfers. But golf equipment and apparel companies PING, Antigua and Titleist helped get the program off the ground and ensure participants could learn the game, free of charge.

“This program is completely donor- and sponsor-funded, which we’re so thankful for,” Perry said. “It would not be possible without them.”

Armed with the proper clubs, the students were then ready to begin tackling the often-maddening sport that so many people spend a lifetime trying — unsuccessfully — to master.

“The second challenge is to teach them very simple ways to approach the game,” Graham said. “For anybody who’s learning at any level, if you make it too complicated, it just goes really bad. So that’s what I’ve done my whole life as a golf teacher, is try to make it as simple as possible.”

Graham said the students were an enthusiastic and highly motivated group.

“This particular group of women, they are looking to use this for business because they know it will improve their careers,” she said.

The students recognize that golf is an access issue: The ability to play at a competent level can open important doors in the business world.

“In the sports industry especially, a lot of men go golfing to conduct business and the women are normally left out because they either don’t know how to play or they’re not invited,” Saal said. “But I think if you make it known that you know how to play, then you’ll be invited, you’ll get more respect and you’ll get those same opportunities.”

Lily Pedersen, a third-year Juris Doctor student who’s interested in corporate law, sees how golf can benefit her career. And although that was part of what drew her to the Grads to Golf program, she also wanted to learn just for the sheer enjoyment of the game.

But ensuring she can hold her own on the golf course, she says, is also part of her career training, to avoid being at a competitive disadvantage.

”One professor I had in undergrad said the best thing she ever did for her career was learn to play golf, because she could then talk business on the golf course, make connections, network and she wasn’t left out. That stuck with me — I didn’t want to be left out.”

After an eight-week introduction to the sport, the students might not be ready to join the LPGA just yet. But they’re confident in their ability to look like they belong on the course.

“If I had to play the short game, I’d feel very confident — my short game is strong,” Nelson said with a laugh. “Hitting off the tee, on the fairway, I still need a little bit of work. But I definitely feel more confident than I did a couple months ago.”

Pedersen said a lot of her friends play golf, and to the uninitiated, the golf course can be a very foreign atmosphere.

“I’m not easily intimidated, but I didn’t know anything,” she said. “A big thing we learned was just basic golf etiquette. For instance, we didn’t know where to stand or where to leave our golf bag. And that was something I feared going into if I didn’t learn to play golf.”

All the students were thankful for the opportunity to learn and highly recommend the program.

And Coach Graham said Grads to Golf is the kind of thing that makes her proud to be a Sun Devil.

“I’m a two-time graduate of ASU, a double Devil,” she said. “And I am so proud of this university for taking this seriously. For ASU to say, ‘OK, we’ll find sponsors, we’ll get an endowment, we want this to work,’ says a lot about how much they value the program. This can make a big difference for these women, and I’m just really, really proud of ASU.”