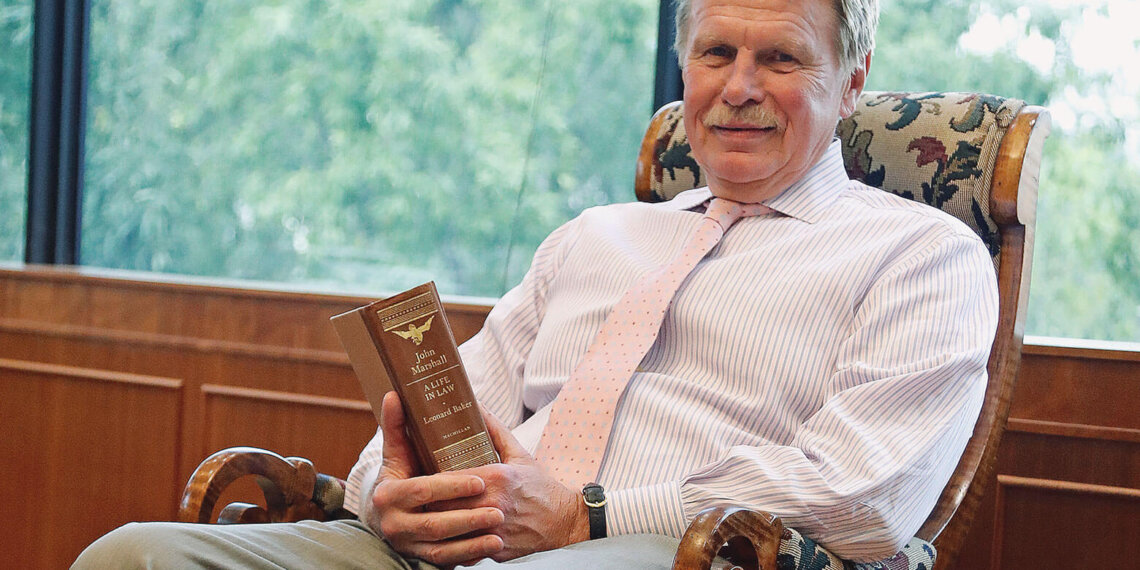 Ten years ago, Campbell Law School made the leap from its Buies Creek, North Carolina, campus to downtown Raleigh to become the capital city’s only law school. The law school graduated its first students 40 years ago, thus this year’s 10-40 anniversary celebration.

A former United States Bankruptcy Judge for the Eastern District of North Carolina, J. Rich Leonard is currently the longest-serving dean at any North Carolina law school having started on July 15, 2013.

“My job was to ingrain the law school into the city in every possible way,” Leonard explained. “One of my favorite recruiting techniques is to go out on my wonderful balcony off my office that overlooks downtown Raleigh with prospective students and show them my domain. Then I say, ‘What would you like to do’ and I point in any direction.”

Leonard continues, “You have all the branches of state government. You have six courthouses within walking distance. You’ve got all the major law firms in the state. You’ve got all the major technology companies within six or seven blocks of the law school. It means there’s a vibrancy to what we can offer students that few other law schools in the state and few in the country can.”

In the years since Leonard took the law school’s helm, there has been a stunning decline in applicants to law schools. The Great Recession, rising costs of law school tuition, and its stepsister; increased student debt, have sliced the number of applicants in half over the past decade.

One of those programs is Campbell Law’s unique FLEX program, which allow students to earn a Juris Doctor degree by taking fewer hours each semester than required by the full-time program. In May, the dean partnered with Cape Coast University in Ghana to launch the only sub-Sarahan law school study abroad program of its kind. And in January, the law school is poised to start its fifth clinic, a business law clinic located at HQ Raleigh.

All the efforts appear to be working.

“We just seated a class of 177. We have 500 students in the building for the first time, which means we are really at capacity. And we’re getting stronger students. The median LSAT has gone up each year for the past three,” Leonard added.

Leonard credits the shift in part to the #MeToo movement. “You have a lot of bright young women who want credentials to hold their ground and law school looks like a good one,” he said. “It’s also the feminization of our feeder schools. If you look at our primary feeder schools, seven of the eight have swung heavily female. So we may just be mirroring where our students come from.”

STATE OF THE ART COURTROOMS

Campbell Law School is known for getting its graduates practice ready.

“We’ve always been an advocacy school. Campbell in some ways is set up to train lawyers with the practical skills of being a lawyer, but we put it on steroids. We poured a lot of money into court technology so that we have state-of-the-art courtrooms. Anything you can do in the courtroom anywhere in the world, you can do in our courtrooms,” Leonard said.

As a result, when Campbell Law students go to moot court or mock trial competitions, “they’ve got all the skills that you could possibly need as a successful advocate. We’ve also expanded our program to go to more competitions abroad. There was a weekend last year when we had kids in Dublin, Hong Kong and Puerto Rico.”

Leonard is a history buff who has engaged in several projects in Raleigh aimed at restoring and preserving a legal legacy. So, perhaps it was divine providence when the great-great-granddaughter of U.S. Supreme Court Chief Justice John Marshall donated his rocking chair to the law school. The chair is housed in the school’s library with an accompanying exhibit highlighting the accomplishments of Marshall, who served on the high court from 1801 to 1835.

“In those days, Supreme Court justices presided over the Circuit Court. Marshall was in Raleigh because he was assigned to the Fifth Circuit. So twice a year for 32 years, he traveled from Richmond to Raleigh and convened the North Carolina Circuit Court downtown on Fayetteville Street. You can almost see where it was from my balcony.”