Inside the Trump Impeachment with UNC Law Professor Michael Gerhardt 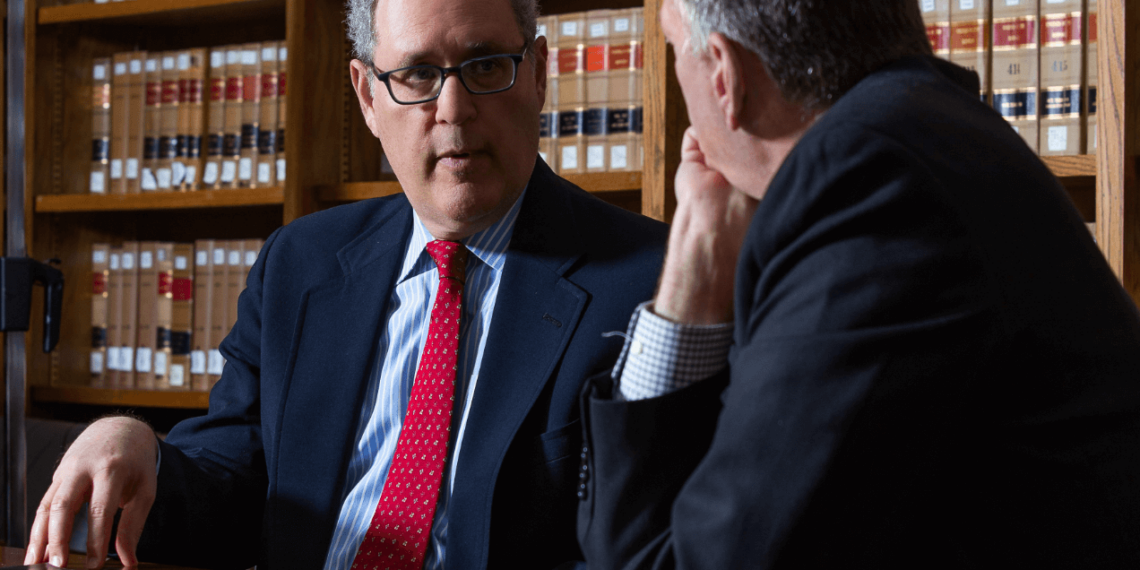 On December 4, 2019, UNC School of Law Professor Michael Gerhardt testified at the House Judiciary Committee hearing on the impeachment of President Donald Trump. “If Congress fails to impeach here, then the impeachment process has lost all meaning, and along with that, our Constitution’s carefully crafted safeguards against the establishment of a king on American soil,” Gerhardt told the committee. “No one, not even the president, is beyond our Constitution and our laws.”

Gerhardt has written extensively on impeachment and has testified before Congress over 20 times including as the only joint witness during the Clinton impeachment hearing.

In late February, several weeks after the Senate acquitted Donald Trump, Gerhardt sat down for an interview with Attorney at Law Magazine Executive Publisher Bob Friedman. Gerhardt updated some of his comments July 1.

BF: Did the impeachment process work?

MG: I think it worked as expected, beginning with the House’s impeachment of the president. And in the next phase, the Senate acquitted the president. I think the expectation was that the president’s fellow Republicans would hold together in both the House and particularly the Senate, where there was never any way it would get close to the at least two-thirds supermajority to convict, and that’s the way it worked out.

Clearly, the rise of political parties has complicated if not undermined the effectiveness of impeachment as a check on presidential misconduct. The idea behind the impeachment process is to see whether or not there’s serious enough misconduct that would justify getting more support for removal than just from one political party.

BF: The question has been raised, is impeachment a political tool or a constitutional tool?

We’ve had three impeachment trials of presidents, and they’ve all resulted in acquittals. One reason may be that the influence of political parties is just too strong to overcome and therefore it becomes impossible, as a practical matter, for members of Congress to buck their party, either to impeach a president or to convict him. Another reason impeachment may have become ineffective is that the constitutional requirement of at least two-thirds of senators as the threshold for conviction and removal is practically impossible to meet, and therefore the combination of that rule along with the pull of political parties makes it highly unlikely you’ll ever see a president removed from office in this way.

BF: Since the outcome of the House impeachment and Senate trial were known in advance, why go through the charade?

MG: I think the challenge for the Speaker and for the House as a whole was whether to do something about the president’s misconduct or not. The Democratic majority didn’t invent the evidence against the president, and that put the House in a difficult position. Do we do something and just have it end up as it did in the Senate, where the president got acquitted, or do we just do nothing and give the president a pass? I think the House leaders decided this is a constitutional process and we think there’s something bad enough here to justify impeachment. It may not prevail, but for history’s sake, we will have taken our stand.

BF: The crimes committed by President Trump were very serious so can you ever envision a situation where the constitutional process removes a president from office?

MG: I think what we’re coming to grips with is the fact that impeachment process may not be very effective when it comes to dealing with presidential misconduct.

It may mean that we need to think of other ways to deal with serious misconduct by a president that are more effective. Maybe what we’re discovering is that if a president has strong support in his party and a strong base, he can do pretty much whatever he wants, even if that’s not consistent with the Constitution. Or maybe the Constitution doesn’t matter as much as we thought it did.

Has the Role of the President Changed?

BF: Considering the extent of the transgressions by this president, has the role of the president changed immeasurably? Countries with much longer histories than ours see the Trump presidency as just a swing of the pendulum. Is it?

MG: It may be just a swing in the direction of an overly strong and dominant president. But, I think there’s more happening than what the president’s base wants. The theory that supports what the president did up until the time of his impeachment and supports his conduct post
impeachment and supports his conduct post
impeachment is a theory called the unitary theory of the executive. It’s a theory that conservative lawyers have been putting forward for about 30 or 40 years, and President Trump may be the perfect client, so to speak, to put that theory into effect.

So, one thing we might be seeing is this newer conception of the presidency that envisions that the president controls the exercise of all executive power. And Trump himself said, to paraphrase him, “Look, I have all the information that the House wants. But I don’t have to share it with you.” The president controls the entire flow of information within his branch, and he controls firing and hiring people in the executive branch. He can decide for himself whether or not to comply with a subpoena, either from the Congress or the courts. That is what the unitary theory of the executive posits.

So, the unitary theory of the executive posits a really powerful president, more powerful than I think we’ve seen as of yet in this country. And the question becomes what are the checks against a president who’s unleashed to all that this theory promises?

At the same, I think that President Trump has normalized misconduct. And so I’m not sure there’s any misconduct that his base or a majority of both chambers of Congress would think is inappropriate for him.

BF: The Constitution was written to prevent the abuses of power committed by King George III. What has brought us 360 degrees to where we are condoning what the founders sought to prevent?

MG: There are a lot of different factors. One is the rise of political parties that have become like tribes, and for each of the majority parties it’s all win or lose. Second, I think social media, the place where people generally get their information, just reinforces their opinions. Social media ends up hardening opinions rather than enlightening opinion. Third, the Senate has not evolved into the institution that I think the framers had in mind. They saw the Senate as an institution that could rise above partisan politics and check the president when it became necessary and check the president as an essential institutional exercise of its power. But I think what we saw with President Trump’s impeachment and what we may see with any other president is that allegiance to political party matters more than anything else.

BF: In the period since the acquittal, has it been hard teaching constitutional law?

MG: It’s been much harder to talk to law students and others afterward because typically, what we do in law school as lawyers is we try to think of what the arguments are on each side. I think the constitutional arguments on the president’s side this time were very weak. One indication of that is people in my field of constitutional law were relatively united, conservative and liberal, that there was a problem and this president crossed the line. Indeed, there were no conservative law professors rallying to the president’s side, all the good arguments seemed to go the other way.

I think in this situation we just passed through we saw on the one side people who were trying to argue the law, but on the other side, people were just making political points and it became as if the two sides inhabited two different worlds.

I think the president’s defense, at least for those who care about the rule of law, was very frightening. He said he may not be subject to any criminal process, not even investigations while he’s in office. Second, he said he did not have to comply with a subpoena even from Congress in an impeachment inquiry. Third, he said he was entitled to keep secret any information that he didn’t want to share, regardless of whether it was entitled to protection in the form of executive privilege or it was evidence he had abused his power or even committed crimes. Fourth, he said he had the power to undermine Congress’s impeachment authority. He could stymie it, he could impede it, he could frustrate it. So, in that circumstance, where was the rule of law? The rule of law appeared to be of no significance in these proceedings. The only real constraint, at the moment, is what those people who voted for him might be willing to put up with. And it seems like they’d be willing to put up with a lot.

Is This a Monarchy?

BF: Let’s say that a Democrat wins in November, and Trump declares the election a fraud, a fake, and says he’s not leaving the White House. Do you anticipate the Supreme Court upholding the election or siding with the president?

MG: So far, he has won nearly every case his administration in the Supreme Court, and that may reflect the extent to which those people he appointed are going to give him whatever he asks for. The real shame of all that is to ask the question whether they would ever uphold something a Democratic president did or would they allow President Trump to do it but not a Democratic president. I fear the answer is they would not, and that tells us a lot about what’s happened to the Supreme Court. I think if push came to shove one would expect this Court to side with the president.

BF: So, we have a monarchy?

MG: If the shoe fits. I also think what we may be witnessing in the electorate is a generational divide, and it remains to be seen if that is all there is to it or whether there is something else happening that exacerbates the tribal warfare in this country. If the president sees his job as dividing people and fanning the flames of tribal dislike, it cannot be good for the country.