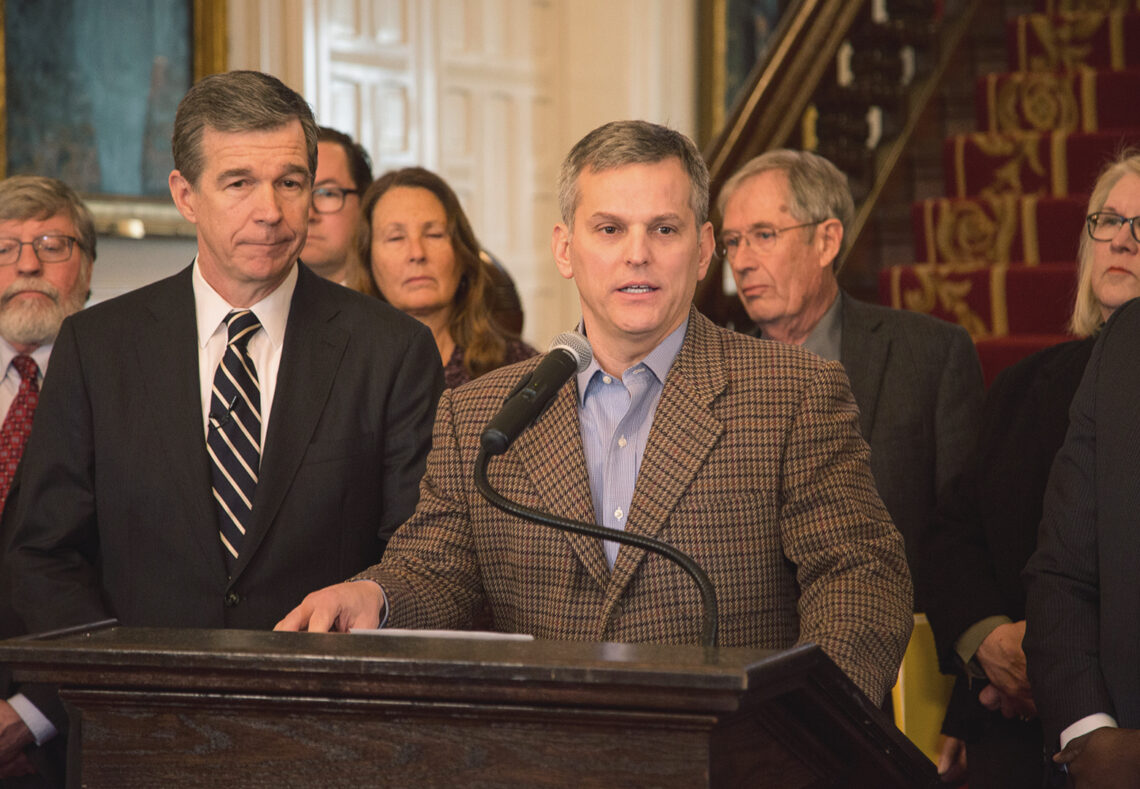 Attorney General Josh Stein was reelected to a second term in November by a slender margin. Tight elections across the nation reflected deep divisions among voters on issues including racial equality.

AALM: What was the jumping-off point for the task force?

JS: We acknowledge that our system of justice is highly imperfect and that there are many ways in which black people have been treated worse by our justice system than white people. We wanted to identify solutions to mitigate those problems and work for their implementation.

AALM: The task force made 125 recommendations, many of which involve policing.

JS: Law enforcement should focus on fighting violent crime and keeping us safe. We want to take work off their shoulders that they should not be burdened with, such as responding to people having a mental health crisis or alcohol or drug issues. These types of issues should be dealt with in the healthcare system instead of the criminal justice system.

When officers violate policies like “use of force,” when they go too far, there must be transparency and accountability to restore and enhance the trust that the community has in law enforcement.

AALM: Training is a big component of the task force’s recommendations.

JS: We want to make sure that we are recruiting and training officers as best as we possibly can. There are two types of training. There’s the training that occurs for basic law enforcement when you’re just getting into the profession – that’s over 600 hours. Then there are 24 hours of in-service training every year for every law enforcement officer. We want to integrate some of these ideas into both types of training. Additionally, every law enforcement agency has its own policies and procedures and training independent of what an officer needs to maintain his or her certification. Those can be improved as well.

AALM: How do you handle the so-called “bad apples” who don’t adhere to the training as we’ve seen in some of the excessive force cases around the country?

JS: Some changes will require the Criminal Justice Training and Standards Commission or the Sheriff ’s Training and Standards Commission to make changes to the requirements for law enforcement certification. They need to address their authority to create a public database when officers get into trouble. This will notify other agencies so that you don’t have a “wandering officer” who just goes from one agency to the next.

AALM: I know from talking to judges that they have been looking for several years at the problem of implicit bias in the court system.

JS: We are recommending that there be implicit bias training for all court actors – prosecutors, judges, clerks, magistrates, and public defenders.

AALM: What are some recommendations for court reform?

JS: We should decriminalize marijuana. Why burden 30,000 North Carolinians with an arrest record and 10,000 with a conviction, which is what happened in 2019. Let’s not fill up our courts and jails unnecessarily. Let’s issue them a civil infraction like a speeding ticket, expunge the records of those previously arrested, and study legalization of marijuana possession, cultivation and sale.

Too many people are being detained pretrial because they can’t pay their bail. Why are we imposing bail for the lowest level misdemeanors? People have been in jail for a longer period than they would have had they been convicted of the charge for which they were arrested because they couldn’t afford a few hundred dollars for bail.

AALM: Let’s talk about your goals to test sexual assault kits that have been accumulated by local law enforcement over the last two decades.

JS: The decision to test these kits now came out of the audit that determined that there were 15,000 or more kits in the possession of local law enforcement agencies across the state. We have marshaled resources to test the kits, including grants from the federal government, the Governor’s Crime Commission, and a legislative appropriation.

We’re working with local law enforcement to get those outsourced to labs where they can be analyzed. We’ve had about a 40% hit rate, meaning that the DNA of the kits matches against a known individual in the database. When we get that information, we share it with local law enforcement. There were something like 11 arrests involving 15 separate sexual assaults in Durham last year. We’ve seen arrests in Winston-Salem, Wilmington, Fayetteville, Charlotte, Johnston County, and Asheville, among other places. When we close these cases, we’re bringing justice to victims, we’re putting very dangerous people behind bars and we’re protecting people because many of these perpetrators are repeat offenders.

AALM: What is the number one consumer complaint received by your office?

JS: Robocalls remain an absolute scourge, worse yet they are a means of fraud on vulnerable people, particularly seniors.

In December, we reached a $14 million settlement with Dish Network for violating the do-not-call law. It was the largest do-not-call penalty in state history. We’re also one of three or four states partnering with the federal government to bring action in Texas against a robocaller who had made 75 million calls to North Carolina alone. Finally, I’ve partnered with my fellow AGs to negotiate a series of anti robocaller principles with the largest phone companies. The goal is to put a stop to these unwanted annoyances.

AALM: Two months ago, you filed an action against Chemours Co. and its predecessor, DuPont de Nemours Inc., in a drinking water matter.

JS: For decades, their Fayetteville plant was discharging Gen X and other so-called “forever chemicals.” They’re called forever chemicals because they don’t degrade in the environment. When they get in the human body, they accumulate. If you drink water that has PFAS forever chemicals in it or you eat food and where the plants have it, or drink milk from cows that have it or eat hogs that have it in their systems, it bioaccumulates and it can cause cancers and other diseases in people. The company discharged these chemicals for decades and knew, we allege, that it caused problems for people. It’s all over southeastern North Carolina. I’m suing to make the polluters clean all that up.

AALM: The elections sent a lot of mixed signals. What do you think is the will of the people of North Carolina as it applies to your office?

JS: Keeping people safe from the opioid epidemic, ensuring that victims of sexual assault get the justice that they deserve through our criminal justice system, making sure that Facebook doesn’t use its dominant market position to hurt the millions of North Carolinians who use its products, protecting children from sex abuse, making sure that the criminal justice system treats everyone fairly and really promotes public safety. None of those issues are urban or rural, and none of those issues are Democratic or Republican. Those are people issues. I try to focus on those issues that make a difference in people’s lives.