In the Huddle with the MVPs of Gallagher & Kennedy 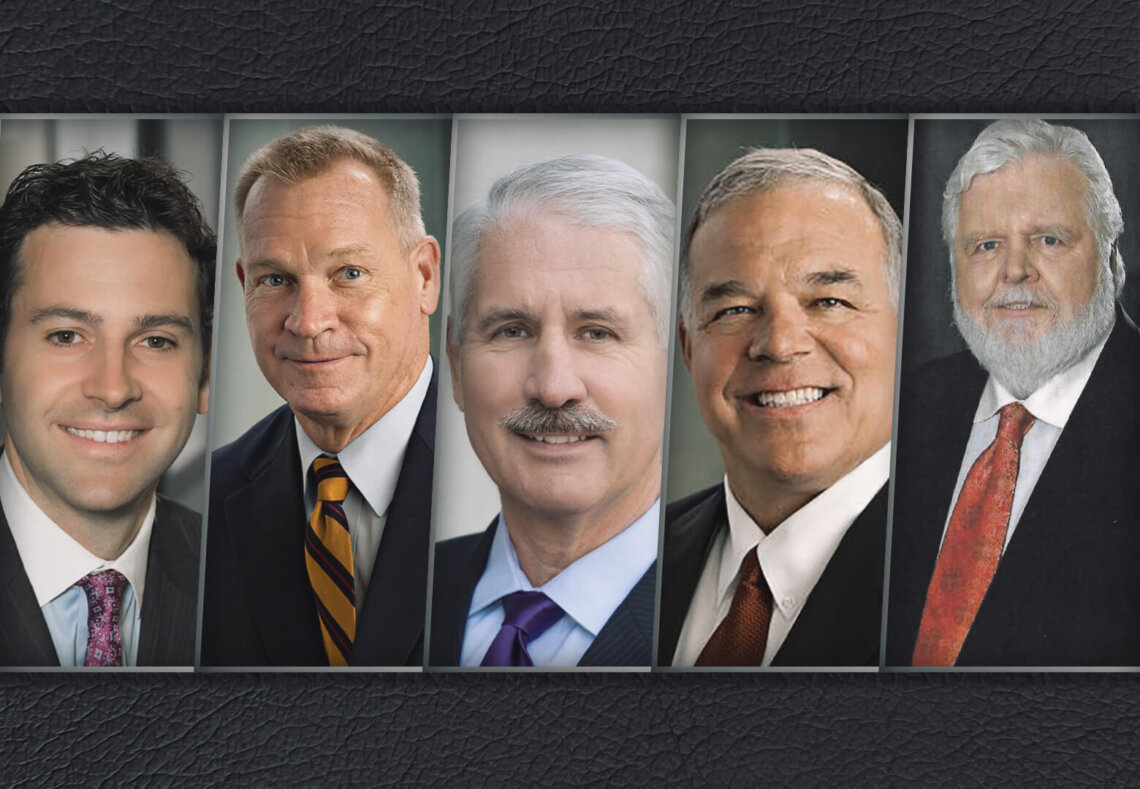 Athletes, particularly those competing at the NCAA level, are a special breed. Their success on and off the ﬁeld depends on (among other things) drive, determination and discipline. These same traits translate seamlessly and positively into their professional lives. There’s no greater evidence of this than in the practice of law. Many of the same challenges and demands once faced on a court or playing ﬁeld are mirrored in the daily rigors of practicing law, and according to a few athletes/attorneys of Gallagher & Kennedy, their past sports endeavors have proven advantageous in building highly successful careers.

Gallagher & Kennedy, one of Arizona’s premier law firms, is comprised of attorneys whose talents and expertise have consistently ranked them among the finest in the country. Not surprisingly, several of these attorneys first proved their prowess, stamina, and avidity to win as NCAA athletes. Indeed, many have even gone on to play professionally before segueing into law.

Co-founding partner Mike Gallagher recalls those early days when more than 40 years ago, he and Mike Kennedy joined forces to form Gallagher & Kennedy. Particularly in the formative years, this was a group that naturally seemed to attract other accomplished athletes who were eager to apply their combined experience of education and rigorous athletic training to serving the people of Arizona.

“I don’t think we necessarily went out to hire former athletes, but we had a significant number of them including several women in the early days,” says the former baseball star and major league scout. “Mike played a lot of golf, and his sister ultimately went on the professional tour. I had played professional baseball and some of our early hires were equally experienced athletes. One of these was Charlie Hickox who won three gold medals and two silver in the ’68 Olympics.

“I do think it’s a plus if someone has played collegiate sports but I also think that people who find success in various efforts, not necessarily just sports, bring good experience and a good attitude to the practice of law. I think the competitive experience is a plus.”
“The reason I became a trial lawyer was, just like sports, they kept scores,” Gallagher adds with a smile.

LESSONS FROM THE PLAYING FIELDS

One of the hallmarks of a thriving law firm is the synergy and collaboration born of like-minded professionals working towards a common goal. While individual excellence is the goal for all employees, Gallagher & Kennedy’s culture centers on a team approach of service excellence.

As the pitcher for his Stanford baseball team, Robert “Bob” Boatman helped lead them to top ten rankings several times. Playing with such notables as John Elway, Steve Buechele, and Mike Aldrete, Boatman segued his sports success into a thriving legal career in personal injury and wrongful death spanning more than 35 years.

“Baseball made the college experience much more fun,” he says. “Great teammates, life lessons, and competing at a high level. As a lawyer, I like helping people, being constantly intellectually challenged, and the competition.

“We have a very unique place and a very strong sense of community and teamwork here,” says Boatman, a shareholder of the firm. “I’ve worked at other large firms where it was very cut-throat. We have a very substantial personal injury group here and yet it’s quite the opposite of that antagonism. It’s very much a team approach and most of us work collaboratively especially on large cases.

“It’s not just the lawyers; that same attitude is shared by the legal assistants and paralegals,” he adds. “You know, we have a rule here, whenever we get a settlement or verdict over $1 million, we shut down the office a bit early and take everyone on the team out to celebrate.”

Now a shareholder and leader in the areas of personal injury, bad faith, and civil defense work Jeffrey Pyburn, once enjoyed dual spotlights on both the gridiron and baseball diamond. As the quarterback for the University of Georgia, he led the Bulldogs to a Southeastern Conference Championship. Equally talented in centerfield, Pyburn broke the school’s records for home runs and RBI’s, grabbing another Southeastern Conference title in this sport. His talents did not go unnoticed. A first-round MLB draft pick Pyburn not only played for the San Diego Padres but was also nabbed by NFL’s Buffalo Bills.

Compared to these experiences he says he never feels pressure at trials. “Pressure is having 90,000 people booing you after you throw an interception,” says Pyburn. “Outwork your opponent and always be prepared and there’s never pressure at trial.”

“Football is the ultimate team sport,” he says. “You have to rely on your teammates to do their jobs. The chain is only as strong as the weakest link. Trying cases requires many of the same things you do as an athlete. Out-work your adversary, know your game plan cold, don’t get intimidated and make sure everybody on the ‘team’ is pulling their weight. You’ve gotta’ play by the rules. In football, you try to knock the hell out of your opponent with good, clean hits. Same thing at trial.”

As a guard for Notre Dame’s basketball team, shareholder Matthew MacLeod has found ample opportunities to apply the skills and habits acquired on the court to his personal injury practice.

“Whether you are on the court or in the courtroom, composure is essential to your success,” says the young attorney. “There are so many ups and downs throughout a game or trial, it is imperative to remain calm. If you can remain calm, you have a great chance to be able to execute what you have practiced and prepared.

“Sports and practicing law share similarities both physically and mentally,” adds MacLeod. “If you want to do either, then both physical endurance and mental toughness are essential.”

An invitation to “walk-on” to the Indiana University’s powerful football team opened the door for shareholder Charles “Chuck” Thomson to prove his mettle. By the time he graduated, Thomson had been named MVP and honorary captain as well as selected by the National Football Foundation and Hall of Fame as one of only 11 national scholar-athletes and the only one from the Big 10 that year.

“My high school and college coaches were more influential in shaping me as a person than anyone other than my parents and immediate family members,” says Thomson. “They instilled in me the idea that by hard work, discipline, and single-minded dedication I could elevate my game to a level where I was able to compete with, and sometimes even beat, guys who were much better athletes than I was. I carried that lesson with me to law school and into the practice of law.”

With a flourishing practice in civil litigation, Thomson continues to apply many of the lessons learned on the IU gridiron.

“Over three years, I have come up against many adversaries in my civil litigation practice whom I couldn’t out-think, but I’ve met very few that I couldn’t out-work,” he says. “This philosophy served me well as a litigator and it traces back directly to my football experience.”

It’s clear that for these attorneys, the sports they played, the coaches and teammates with whom they shared commitment and goals, and above all, the families from which they came have all influenced them as people and as attorneys. This is not surprising since the philosophy on which Gallaher & Kennedy’s Personal Injury & Wrongful Death practice was built mirrors those same mores.

Sustaining high regard for family, colleagues, integrity, and accountability, the culture of Gallagher & Kennedy supports the ideology which emphasizes hard work, service excellence through teamwork and a balanced approach to work, family, and community. This work environment earned them the distinction of being named “Best Places to Work” by Phoenix Business Journal two years running.

The sustained growth, accolades, and triumphant wins the firm has enjoyed have been described by some as “the classic American success story.” According to Gallagher, the past 40 years have been an opportunity to follow a new dream after his first was dashed.

“Once I sustained the injury to my arm, my college and certainly professional sports career took a radical turn,” he says. “Building this firm with Mike and assembling such an amazing group of attorneys and professionals who successfully go toe-to-toe with the best of the best every day has been one of the proudest accomplishments of my life.”