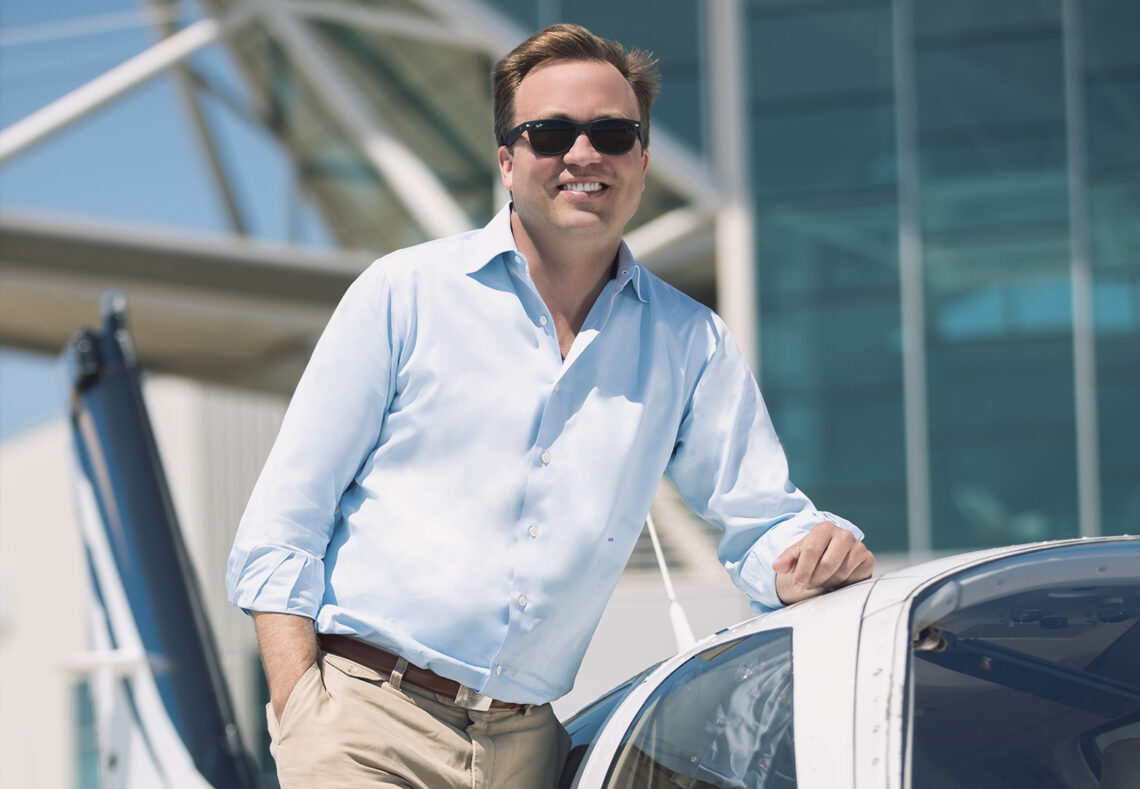 “Have you seen the wings of justice,” attorney Matthew Bissette asked me during our photoshoot at Whitley Law Firm. We had in fact, just come from RDU to shoot the cover for this issue with Managing General Partner Ben Whitley and the firm’s Beechcraft Baron, fondly known as “The Wings of Justice.”

Whitley takes wing to distant points in North Carolina about twice a month. He recently visited a client in Andrews NC, almost 300 miles west of Raleigh.

“These are ways that we can access our clients face-to-face, which I think is important,” explained Whitley. “It was challenging during the pandemic, but I think people, especially with serious, life-changing cases, really want to be able to see their lawyer and interface with their lawyer. With the plane, we have been able to do that.”

Kinston native Ben Whitley had his pilot’s license at age 17. He seriously considered a career as an airline pilot and has a commercial pilot rating. However, he ultimately decided the path to a career as a pilot would take too many years and was drawn to “the family business.”

The family business is personal injury law. Whitley’s father, Bob, has a thriving practice. “I’ve always been able to watch what he did to help people,” recalled Whitley. “I got to watch his satisfaction in his job. But it really wasn’t until college (at UNC) when I got into political science. I just started realizing that my skill set and with my language and thoughts and strategy, I would probably be better suited going into personal injury law.”

“Seeing what my dad did, how you’re able to change the arc of somebody’s life, that’s a satisfying notch on the belt. Being able to see somebody’s story changed by the use of your own mind, that’s pretty cool,” said Whitley.

He earned his Juris Doctor from Mississippi College of Law and returned home to start his apprenticeship with his father.

“If you can’t be good at that, it’s hard to be successful at this job, especially when the only clients we have are human beings,” he added. “My dad taught me that you can be a nice guy and be a winner in this field. You don’t have to be that asshole that everybody thinks that they want for an attorney.”

The Sounds of Metal

A growing segment of the practice is representing clients with construction injuries. Since a significant number of construction workers in the region are Hispanic, the firm is marketing to them through Spanish-speaking media. Arroba, who is bi-lingual, was hired to handle many of the cases.

Roughly 20% of the firm’s practice is mass tort claims against pharmaceutical and medical devices manufacturers. Whitley was on the discovery committee in the Granuflo Multidistrict Litigation. Granulflo is a product used during kidney hemodialysis that had serious side effects and caused some deaths.

“The medicine is a little bit more cut and dried for juries to understand if it ever gets that far. In a bad hip replacement, if you have metal hitting another piece of metal, it creates filings that cause metallosis in the blood and contaminates the human body.”

Whitley said the firm is not looking to be a part of the lead council committee in national class action cases. “We’re a small firm law as it pertains to national litigation. We look for litigation groups that have already been started that we can be a part of and team up with.”

“What we’re trying to offer to the mass tort North Carolina clients is that a lot of them are inundated with commercials from law firms all over the country. What we want them to be able to have is a brick and mortar at a North Carolina firm that they can come to, which gives them more consumer protection than hiring an out-of-state firm.”

Bob Whitley began doing TV commercials in the late 1980s, and they continue to be part of the firm’s marketing. But Whitley said they get more clients through a weekly, 30-minute TV show, “Attorneys on Call,” which he and his father have done on CBS-17 for nine years.

“What it’s allowed us to do is let people feel like they know us and understand our values. I think consumers of law are looking for authenticity. What my dad and I offer is authenticity. We are your lawyers. You get to see us. You get to talk to us. We have brought small-town culture to the other lawyers here at the firm. That’s our brand.”

Whitley tells new clients that their cases could take as long as six to seven years. “Some clients are fine with that, and others want to know what’s happening every month. We keep them informed even if nothing happened in the last month,” explained Whitley.

“The lawyers that call and argue with adjusters are not going to get the best settlement. It’s a relationship business. You get a better deal creating relationships and being nice and even treating the adversary as they would like to be treated,” said Whitley.

“Everyone is interested in closing files. If you can approach a situation with, ‘I’m here to help you close a file and provide information so that you can valuate it accurately and fairly so we can talk about it,’ then we’re helping them move a file, and at the same time we’re helping our client receive compensation quicker.”

Being in The Flow

Airplane paraphernalia fills a corner of Whitley’s law office. It’s the intersection of his passion for flying and his practice of law.

“Flying is almost like a meditative experience. When you think about planned strategy with cases, it’s all about seeing how different components all work together,” said Whitley.